From Infogalactic: the planetary knowledge core
Jump to: navigation, search
Not to be confused with Carborundum.

Corundum is a crystalline form of aluminium oxide (Al
2O
3) typically containing traces of iron, titanium, vanadium and chromium.[2][3] It is a rock-forming mineral. It is one of the naturally transparent materials, but can have different colors when impurities are present. Transparent specimens are used as gems, called ruby if red and padparadscha if pink-orange. All other colors are called sapphire, e.g., "green sapphire" for a green specimen.

Because of corundum's hardness (pure corundum is defined to have 9.0 Mohs), it can scratch almost every other mineral. It is commonly used as an abrasive on everything from sandpaper to large machines used in machining metals, plastics, and wood. Some emery is a mix of corundum and other substances, and the mix is less abrasive, with an average Mohs hardness of 8.0.

In addition to its hardness, corundum is unusual for its density of 4.02 g/cm3, which is very high for a transparent mineral composed of the low-atomic mass elements aluminium and oxygen.[7] 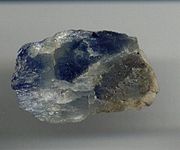 Corundum occurs as a mineral in mica schist, gneiss, and some marbles in metamorphic terranes. It also occurs in low silica igneous syenite and nepheline syenite intrusives. Other occurrences are as masses adjacent to ultramafic intrusives, associated with lamprophyre dikes and as large crystals in pegmatites.[5] It commonly occurs as a detrital mineral in stream and beach sands because of its hardness and resistance to weathering.[5] The largest documented single crystal of corundum measured about 65×40×40 cm (26×16×16 in), and weighed 152 kg (335 lb).[8] The record has since been surpassed by certain synthetic boules.[9]

Corundum for abrasives is mined in Zimbabwe, Russia, Sri Lanka and India. Historically it was mined from deposits associated with dunites in North Carolina, USA and from a nepheline syenite in Craigmont, Ontario.[5] Emery grade corundum is found on the Greek island of Naxos and near Peekskill, New York, USA. Abrasive corundum is synthetically manufactured from bauxite.[5] Four corundum axes dating back to 2500 BC from the Liangzhou culture have been discovered in China. The surfaces of the axes are remarkably smoothly polished.[10]

In 1837, Marc Antoine Gaudin made the first synthetic rubies by fusing alumina at a high temperature with a small amount of chromium as a pigment.[11] In 1847, Ebelmen made white synthetic sapphires by fusing alumina in boric acid. In 1877 Frenic and Freil made crystal corundum from which small stones could be cut. Frimy and Auguste Verneuil manufactured artificial ruby by fusing BaF
2 and Al
2O
3 with a little chromium at temperatures above 2,000 °C (3,632 °F). In 1903, Verneuil announced he could produce synthetic rubies on a commercial scale using this flame fusion process.[12]

The Verneuil process allows the production of flawless single-crystal sapphires, rubies and other corundum gems of much larger size than normally found in nature. It is also possible to grow gem-quality synthetic corundum by flux-growth and hydrothermal synthesis. Because of the simplicity of the methods involved in corundum synthesis, large quantities of these crystals have become available on the market causing a significant reduction of price in recent years. Apart from ornamental uses, synthetic corundum is also used to produce mechanical parts (tubes, rods, bearings, and other machined parts), scratch-resistant optics, scratch-resistant watch crystals, instrument windows for satellites and spacecraft (because of its transparency in the ultraviolet to infrared range), and laser components. 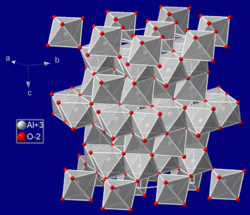 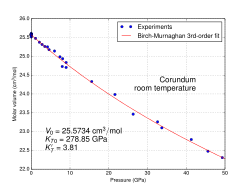 Corundum crystallizes with trigonal symmetry in the space group R3c and has the lattice parameters a = 4.75 Å and c = 12.982 Å at standard conditions. The unit cell contains six formula units.

In the lattice of corundum, the oxygen atoms form a slightly distorted hexagonal close packing in which two thirds of the gaps between the octahedra are occupied by aluminum ions.