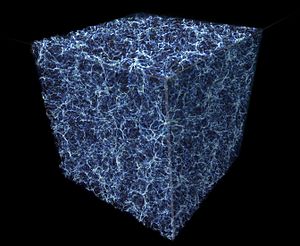 Matter distribution in a cubic section of the Universe. The blue fiber structures represent the matter (primarily dark matter) and the empty regions in between represent the cosmic voids.

Cosmic voids are the vast empty spaces between filaments (the largest-scale structures in the Universe), which contain very few or no galaxies. Voids typically have a diameter of 10 to 100 megaparsecs; particularly large voids, defined by the absence of rich superclusters, are sometimes called supervoids. They have less than one-tenth of the average density of matter abundance that is considered typical for the observable Universe. They were first discovered in 1978 in a pioneering study by Stephen Gregory and Laird A. Thompson at the Kitt Peak National Observatory.[1]

Voids are believed to have been formed by baryon acoustic oscillations in the Big Bang, collapses of mass followed by implosions of the compressed baryonic matter. Starting from initially small anisotropies from quantum fluctuations in the early Universe, the anisotropies grew larger in scale over time. Regions of higher density collapsed more rapidly under gravity, eventually resulting in the large-scale, foam-like structure or “cosmic web” of voids and galaxy filaments seen today. Voids located in high-density environments are smaller than voids situated in low-density spaces of the universe.[2]

The structure of our Universe can be broken down into components that can help describe the characteristics of individual regions of the cosmos. These are the main structural components of the cosmic web:

Voids have a mean density less than tenth of the average density of the universe. This serves as a working definition even though there is no single agreed upon definition of what constitutes a void. The matter density value used for describing the cosmic mean density is usually based on a ratio of the number of galaxies per unit volume rather than the total mass of the matter contained in a unit volume.[7]

Cosmic voids as a topic of study in astrophysics began in the mid 1970s when redshift surveys became more popular and led two separate teams of astrophysicists in 1978 to identifying superclusters and voids in the distribution of galaxies and Abell clusters in a large region of space.[8][9] The new redshift surveys revolutionized the field of astronomy by adding depth to the two-dimensional maps of cosmological structure, which were often densely packed and overlapping,[5] allowing for the first three-dimensional mapping of the Universe. In the redshift surveys, the depth was calculated from the individual redshifts of the galaxies due to the expansion of the Universe according to Hubble's law.[10]

A summarized timeline of important events in the field of cosmic voids from its beginning to recent times is listed below:

There exist a number of ways for finding voids with the results of large-scale surveys of the Universe. Of the many different algorithms, virtually all fall into one of three general categories.[24] The first class consists of void finders that try to find empty regions of space based on local galaxy density.[25] The second class are those which try to find voids via the geometrical structures in the dark matter distribution as suggested by the galaxies.[26] The third class is made up of those finders which identify structures dynamically by using gravitationally unstable points in the distribution of dark matter.[27] The three most popular methods through the study of cosmic voids are listed below:

This first class method uses each galaxy in a catalog as its target and then uses the Nearest Neighbor Approximation to calculate the cosmic density in the region contained in a spherical radius determined by the distance to the third closest galaxy.[28] El Ad & Piran introduced this method in 1997 to allow a quick and effective method for standardizing the cataloging of voids. Once the spherical cells are mined from all of the structure data, each cell is expanded until the underdensity returns to average expected wall density values.[29] One of the helpful features of void regions is that their boundaries are very distinct and defined, with a cosmic mean density that starts at 10% in the body and quickly rises to 20% at the edge and then to 100% in the walls directly outside the edges. The remaining walls and overlapping void regions are then gridded into respectively distinct and intertwining zones of filaments, clusters, and near-empty voids. Any overlap of more than 10% with already known voids are considered to be subregions within those known voids. All voids admitted to the catalog had a minimum radius of 10 Mpc in order to ensure all identified voids were not accidentally cataloged due to sampling errors.[28]

This particular second class algorithm uses a Voronoi tessellation technique and mock border particles in order to categorize regions based on a high density contrasting border with a very low amount of bias.[30] Neyrinck introduced this algorithm in 2008 with the purpose of introducing a method that did not contain free parameters or presumed shape tessellations. Therefore, this technique can create more accurately shaped and sized void regions. Although this algorithm has some advantages in shape and size, it has been criticized often for sometimes providing loosely defined results. Since it has no free parameters, it mostly finds small and trivial voids although, the algorithm places a statistical significance on each void it finds. A physical significance parameter can be applied in order to reduce the number of trivial voids by including a minimum density to average density ratio of at least 1:5. Subvoids are also identified using this process which raises more philosophical questions on what qualifies as a void.[31]

This third class method is drastically different from the previous two algorithms listed. The most striking aspect is that it requires a different definition of what it means to be a void. Instead of the general notion that a void is a region of space with a low cosmic mean density; a hole in the distribution of galaxies, it defines voids to be regions in which matter is escaping; which corresponds to the Dark Energy equation of state, w. Void centers are then considered to be the maximal source of the displacement field denoted as Sψ. The purpose for this change in definitions was presented by Lavaux and Wandelt in 2009 as a way to yield cosmic voids such that exact analytical calculations can be made on their dynamical and geometrical properties. This allows DIVA to heavily explore the ellipticity of voids and how they evolve in the large-scale structure, subsequently leading to the classification of three distinct types of voids. These three morphological classes are True voids, Pancake voids, and Filament voids. Another notable quality is that even though DIVA also contains selection function bias just as first class methods do, DIVA is devised such that this bias can be precisely calibrated, leading to much more reliable results. Multiple shortfalls of this Lagrangian-Eulerian hybrid approach exist. One example is that the resulting voids from this method are intrinsically different than those found by other methods, which makes an all-data points inclusive comparison between results of differing algorithms very difficult.[24]

Once an algorithm is presented to find what it deems to be cosmic voids, it is crucial that its findings approximately match what is expected by the current simulations and models of large-scale structure. In order to perform this, the number, size, and proportion as well as other features of voids found by the algorithm are then checked by placing mock data through a Smoothed Particle Hydrodynamic Halo simulation, ΛCDM model, or other reliable simulator. An algorithm is much more robust if its data is in concordance with the results of these simulations for a range of input criterion (Pan et al. 2011).[32]

Since so much time is being dedicated to the study of voids, the question of why they matter to the scientific community arises. The applications of voids is broad and relatively impressive, ranging from shedding light on the current understanding of dark energy, to refining and constraining cosmological evolution models. Some popular applications are mentioned in detail below.

Voids act as bubbles in the Universe that are sensitive to background cosmological changes. This means that the evolution of a void's shape is in part the result of the expansion of the Universe. Since this acceleration is believed to be caused by dark energy, studying the changes of a void's shape over a period of time can further refine the Quintessence + Cold Dark Matter (QCDM) model and provide a more accurate dark energy equation of state.[33]

A 43x43x43 megaparsec cube shows the evolution of the large-scale structure over a logarithmic period starting from a redshift of 30 and ending at redshift 0. The model makes it clear to see how the matter-dense regions contract under the collective gravitational force while simultaneously aiding in the expansion of cosmic voids as the matter flees to the walls and filaments.

Cosmic voids contain a mix of galaxies and matter that is slightly different than other regions in the Universe. This unique mix supports the biased galaxy formation picture that is predicted in Gaussian adiabatic cold dark matter models. This phenomenon provides an opportunity to modify the morphology-density correlation that holds discrepancies with these voids. Such observations like the morphology-density correlation can help uncover new facets about how galaxies form and evolve on the large scale.[34] On a more local scale, galaxies that reside in voids have differing morphological and spectral properties than those that are located in the walls. One feature that has been found is that voids have been shown to contain a significantly higher fraction of starburst galaxies of young, hot stars when compared to samples of galaxies in walls.[35]

Cold spots in the cosmic microwave background, such as the WMAP cold spot found by Wilkinson Microwave Anisotropy Probe, could possibly be explained by an extremely large cosmic void that has a radius of ~120 Mpc, as long as the late integrated Sachs-Wolfe effect was accounted for in the possible solution. Anomalies in CMB screenings are now being potentially explained through the existence of large voids located down the line-of-sight in which the cold spots lie.[36] 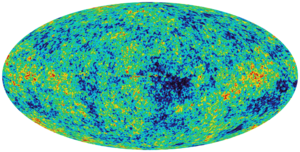 CMB screening of the Universe.

Accelerating expansion of the Universe

Although dark energy is currently the most popular explanation for the acceleration in the expansion of the Universe, another theory elaborates on the possibility of our galaxy being part of a very large, not-so-underdense, cosmic void. According to this theory, such an environment could naively lead to the demand for dark energy to solve the problem with the observed acceleration. As more data has been released on this topic the chances of it being a realistic solution in place of the current ΛCDM interpretation has been largely diminished but not all together abandoned.[37]

Void regions often seem to adhere to cosmological parameters which differ from those of the known universe. It is because of this unique feature that cosmic voids make for great laboratories to study the effects that gravitational clustering and growth rates have on local galaxies and structure when the cosmological parameters have different values from the outside universe. Due to the observation that larger voids predominantly remain in a linear regime, with most structures within exhibiting spherical symmetry in the underdense environment; that is, the underdensity leads to near-negligible particle-particle gravitational interactions that would otherwise occur in a region of normal galactic density. Testing models for voids can be performed with very high accuracy. The cosmological parameters that differ in these voids are Ωm, ΩΛ, and H0.[38]