Prince Lennart Bernadotte, Count of Wisborg, né Prince Gustaf Lennart Nicolaus Paul of Sweden (8 May 1909 – 21 December 2004), a grandson of King Gustaf V of Sweden, was until 1932 a Prince of Sweden and the Duke of Småland.

He was born at the Royal Palace in Stockholm, to Prince Wilhelm of Sweden (Gustaf V's second son) and Wilhelms's wife, Grand Duchess Maria Pavlovna of Russia (he was her first husband). His father's first cousin was Count Folke Bernadotte, and his own first cousin was the father of King Carl XVI Gustaf.

Under the Swedish Act of Succession, a prince or princess marrying without the consent of the Sovereign and government forfeits the right of succession for themselves and their descendants. They give up their titles and assume the family name of Bernadotte. By his marriage on 11 March 1932 he was subsequently stripped of his title, renounced his rights and became Mr. Lennart Bernadotte.

Since 1868, Swedish princes who have lost their succession rights have received noble titles conferred by other reigning monarchs. On 2 July 1951, for himself, his wife and his marital descendants, Bernadotte was admitted by Grand Duchess Charlotte (head of state at the time) into the Nobility of Luxembourg and there as a nobleman called Gustaf Lennart Nicolas Paul Prince Bernadotte as well as Compte de Wisborg.[1] This has been interpreted as the same right to style himself as Prince Bernadotte that his granduncle Oscar had.[2] Counts of Wisborg are considered to be part of the Swedish unintroduced nobility.

King Carl XVI Gustaf of Sweden, who lost the right to confer Swedish noble titles in the new constitution of 1974, still retains the prerogative to restore royal titles, but has chosen not to do so.

In 1944 he portrayed the young Crown Prince Carl of Sweden and Norway in the historical film Prince Gustaf, Bernadotte's only screen acting role.

Lennart Bernadotte concentrated his energy on his estate on the island of Mainau in Lake Constance, Germany, where he died, and on his charitable fund, the Lennart Bernadotte Stiftung. He was considered a major gardening and landscaping talent and expert and turned his island into a popular tourist attraction. 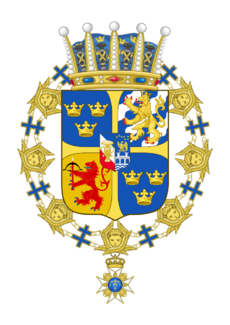 Lennart's coat of arms as prince of Sweden

Bernadotte died in 2004. His remains and those of his second wife were interred in a crypt under the palace chapel on Mainau. His first wife's remains have been buried in his father's grave in Flen.