From Infogalactic: the planetary knowledge core
Jump to: navigation, search
"Countable" redirects here. For the linguistic concept, see Count noun.
Not to be confused with (recursively) enumerable sets.

Georg Cantor introduced the term countable set, contrasting sets that are countable with those that are uncountable (i.e., nonenumerable or nondenumerable[4]). Today, countable sets form the foundation of a branch of mathematics called discrete mathematics.

If such an f can be found that is also surjective (and therefore bijective), then S is called countably infinite.

In other words, a set is countably infinite if it has one-to-one correspondence with the natural number set, N.

As noted above, this terminology is not universal.: Some authors use countable to mean what is here called countably infinite, and do not include finite sets.

In the western world, different infinities were first classified by Georg Cantor around 1874.[6]

A set is a collection of elements, and may be described in many ways. One way is simply to list all of its elements; for example, the set consisting of the integers 3, 4, and 5 may be denoted {3, 4, 5}. This is only effective for small sets, however; for larger sets, this would be time-consuming and error-prone. Instead of listing every single element, sometimes an ellipsis ("...") is used, if the writer believes that the reader can easily guess what is missing; for example, {1, 2, 3, ..., 100} presumably denotes the set of integers from 1 to 100. Even in this case, however, it is still possible to list all the elements, because the set is finite.

Some sets are infinite; these sets have more than n elements for any integer n. For example, the set of natural numbers, denotable by {0, 1, 2, 3, 4, 5, ...}, has infinitely many elements, and we cannot use any normal number to give its size. Nonetheless, it turns out that infinite sets do have a well-defined notion of size (or more properly, of cardinality, which is the technical term for the number of elements in a set), and not all infinite sets have the same cardinality.

Bijective mapping from integer to even numbers

Since every element of {a, b, c} is paired with precisely one element of {1, 2, 3}, and vice versa, this defines a bijection.

We now generalize this situation and define two sets as of the same size if (and only if) there is a bijection between them. For all finite sets this gives us the usual definition of "the same size". What does it tell us about the size of infinite sets?

As in the earlier example, every element of A has been paired off with precisely one element of B, and vice versa. Hence they have the same size. This is an example of a set of the same size as one of its proper subsets, which is impossible for finite sets.

Likewise, the set of all ordered pairs of natural numbers is countably infinite, as can be seen by following a path like the one in the picture: 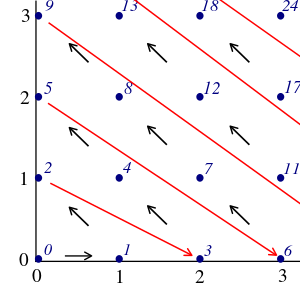 This mapping covers all such ordered pairs.

Interestingly: if you treat each pair as being the numerator and denominator of a vulgar fraction, then for every positive fraction, we can come up with a distinct number corresponding to it. This representation includes also the natural numbers, since every natural number is also a fraction N/1. So we can conclude that there are exactly as many positive rational numbers as there are positive integers. This is true also for all rational numbers, as can be seen below.

Theorem: The Cartesian product of finitely many countable sets is countable.

This form of triangular mapping recursively generalizes to vectors of finitely many natural numbers by repeatedly mapping the first two elements to a natural number. For example, (0,2,3) maps to (5,3), which maps to 39.

Sometimes more than one mapping is useful. This is where you map the set you want to show is countably infinite onto another set—and then map this other set to the natural numbers. For example, the positive rational numbers can easily be mapped to (a subset of) the pairs of natural numbers because p/q maps to (p, q).

What about infinite subsets of countably infinite sets? Do these have fewer elements than N?

For example, the set of prime numbers is countable, by mapping the n-th prime number to n:

What about sets being naturally "larger than" N? For instance, Z the set of all integers or Q, the set of all rational numbers, which intuitively may seem much bigger than N. But looks can be deceiving, for we assert:

In a similar manner, the set of algebraic numbers is countable.[7]

These facts follow easily from a result that many individuals find non-intuitive.

Theorem: Any finite union of countable sets is countable.

With the foresight of knowing that there are uncountable sets, we can wonder whether or not this last result can be pushed any further. The answer is "yes" and "no", we can extend it, but we need to assume a new axiom to do so. 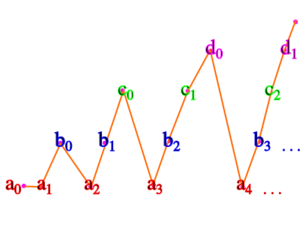 Using a variant of the triangular enumeration we saw above:

Note that this only works if the sets a, b, c, ... are disjoint. If not, then the union is even smaller and is therefore also countable by a previous theorem.

Also note that we need the axiom of countable choice to index all the sets a, b, c, ... simultaneously.

Theorem: The set of all finite-length sequences of natural numbers is countable.

Theorem: The set of all finite subsets of the natural numbers is countable.

The following theorem gives equivalent formulations in terms of a bijective function or a surjective function. A proof of this result can be found in Lang's text.[3]

(Basic) Theorem: Let S be a set. The following statements are equivalent:

Cantor's Theorem asserts that if A is a set and P(A) is its power set, i.e. the set of all subsets of A, then there is no surjective function from A to P(A). A proof is given in the article Cantor's Theorem. As an immediate consequence of this and the Basic Theorem above we have:

Proposition: The set P(N) is not countable; i.e. it is uncountable.

For an elaboration of this result see Cantor's diagonal argument.

The set of real numbers is uncountable (see Cantor's first uncountability proof), and so is the set of all infinite sequences of natural numbers.

The proofs of the statements in the above section rely upon the existence of functions with certain properties. This section presents functions commonly used in this role, but not the verifications that these functions have the required properties. The Basic Theorem and its Corollary are often used to simplify proofs. Observe that N in that theorem can be replaced with any countably infinite set.

Proposition: Any finite set is countable.

Proof: By definition, there is a bijection between a non-empty finite set S and the set {1, 2, ..., n} for some positive natural number n. This function is an injection from S into N.

Proposition: Any subset of a countable set is countable.[8]

Proof: The restriction of an injective function to a subset of its domain is still injective.

Proposition: If A and B are countable sets then A ∪ B is countable.[10]

Proposition: The Cartesian product of two countable sets A and B is countable.[11]

Proof: Observe that N × N is countable as a consequence of the definition because the function f : N × N → N given by f(m, n) = 2m3n is injective.[12] It then follows from the Basic Theorem and the Corollary that the Cartesian product of any two countable sets is countable. This follows because if A and B are countable there are surjections f : N → A and g : N → B. So

is a surjection from the countable set N × N to the set A × B and the Corollary implies A × B is countable. This result generalizes to the Cartesian product of any finite collection of countable sets and the proof follows by induction on the number of sets in the collection.

Proposition: If An is a countable set for each n in N then the union of all An is also countable.[13]

Proof: This is a consequence of the fact that for each n there is a surjective function gn : N → An and hence the function

given by G(n, m) = gn(m) is a surjection. Since N × N is countable, the Corollary implies that the union is countable. We use the axiom of countable choice in this proof to pick for each n in N a surjection gn from the non-empty collection of surjections from N to An.

A topological proof for the uncountability of the real numbers is described at finite intersection property.

If there is a set that is a standard model (see inner model) of ZFC set theory, then there is a minimal standard model (see Constructible universe). The Löwenheim-Skolem theorem can be used to show that this minimal model is countable. The fact that the notion of "uncountability" makes sense even in this model, and in particular that this model M contains elements that are:

was seen as paradoxical in the early days of set theory, see Skolem's paradox.

The minimal standard model includes all the algebraic numbers and all effectively computable transcendental numbers, as well as many other kinds of numbers.

Countable sets can be totally ordered in various ways, e.g.: