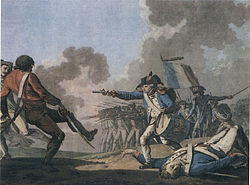 The War in the Vendée was a royalist uprising that was suppressed by the republican forces in 1796.

A counter-revolution can be positive or negative in its consequences; depending, in part, on the beneficent or pernicious character of the revolution that gets reversed, and the nature of those affected. For example, the transitory success of Agis and Cleomenes of ancient Sparta in restoring the constitution of Lycurgus was considered by Plutarch to be counter-revolutionary in a positive sense. During the French Revolution the Jacobins saw the Counter-revolution in the Vendée as distinctly negative, whilst it was strongly supported by the exiled Royalists, the Catholic Church, and the people of the provinces.

The word "counter-revolutionary" originally referred to thinkers who opposed themselves to the 1789 French Revolution, such as Joseph de Maistre, Louis de Bonald or, later, Charles Maurras, the founder of the Action française monarchist movement. More recently, it has been used in France to describe political movements that reject the legacy of the 1789 Revolution, which historian René Rémond has referred to as légitimistes. Thus, monarchist supporters of the Ancien Régime following the French Revolution were counter-revolutionaries, as were supporters of the Revolt in the Vendée and of the monarchies that put down the various Revolutions of 1848. The royalist legitimist counter-revolutionary French movement survives to this day, albeit marginally. It was active during the purported "Révolution nationale" enacted by Vichy France, though, which has been considered by René Rémond not as a fascist regime but as a counter-revolutionary regime, whose motto was Travail, Famille, Patrie ("Work, Family, Fatherland"), which replaced the Republican motto Liberté, Egalité, Fraternité.

After the French Revolution, anti-clerical policies and the execution of King Louis XVI led to the Revolt in the Vendee. This counter-revolution produced what is debated to be the first modern genocide. Monarchists and Catholics took up arms against the revolutionaries' French Republic in 1793 after the government asked that 300,000 Vendeans be conscripted into the Republican military. The Vendeans also rose up against Napoleon's attempt to conscript them in 1815.

Many historians have held that the rise and spread of Methodism in Great Britain prevented the development of a revolution there.[2] In addition to preaching the Christian Gospel, John Wesley and his Methodist followers visited those imprisoned, as well as the poor and aged, building hospitals and dispensaries which provided free healthcare for the masses.[3] The sociologist William H. Swatos stated that "Methodist enthusiasm transformed men, summoning them to assert rational control over their own lives, while providing in its system of mutual discipline the psychological security necessary for autonomous conscience and liberal ideals to become internalized, an integrated part of the 'new men' ... regenerated by Wesleyan preaching."[4] The practice of temperance among Methodists, as well as their rejection of gambling, allowed them to eliminate secondary poverty and accumulate capital.[4] Individuals who attended Methodist chapels and Sunday schools "took into industrial and political life the qualities and talents they had developed within Methodism and used them on behalf of the working classes in non-revolutionary ways."[5] The spread of the Methodist Church in Great Britain, author and professor Michael Hill states, "filled both a social and an ideological vacuum" in English society, thus "opening up the channels of social and ideological mobility ... which worked against the polarization of English society into rigid social classes."[4] The historian Bernard Semmel argues that "Methodism was an antirevolutionary movement that succeeded (to the extent that it did) because it was a revolution of a radically different kind" that was capable of effecting social change on a large scale.[4]

In Italy, after being conquered by Napoleon's army in the late 18th century, there was a counter-revolution in all the French client republics. The most well-known was the Sanfedismo, reactionary movement led by the cardinal Fabrizio Ruffo, which overthrew the Parthenopean Republic and allowed the Bourbon dynasty to return to the throne of the Kingdom of Naples. A resurgence of the phenomenon happened during the Napoleon's second Italian campaign in the early 19th century. Another example of counter-revolution was the peasants rebellion in Southern Italy after the national unification, fomented by the Bourbon government in exile and the Papal States. The revolt, labelled pejoratively by opponents as brigandage, resulted in a bloody civil war that lasted almost ten years.

In the Austrian empire, revolt took place against Napoleon called the Tyrolean Rebellion in 1809. Led by a Tyrolean innkeeper by the name of Andreas Hofer, 20,000 Tyrolean Rebels fought successfully against Napoleon's troops. However, Hofer was ultimately betrayed by the Treaty of Schönbrunn, which led to the disbandment of his troops and was captured and executed in 1810.

The Spanish Civil War was in some respects, a counter-revolution. Supporters of Carlism, monarchy, and nationalism (see Falange) joined forces against the (Second) Spanish Republic in 1936. The counter-revolutionaries saw the Spanish Constitution of 1931 as a revolutionary document that defied Spanish culture, tradition and religion. On the Republican side, the acts of the Communist Party of Spain against the rural collectives can also be considered counter-revolutionary. The Carlist cause began with the First Carlist War in 1833 and continues to the present. 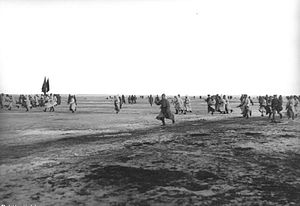 The White Army and its supporters who tried to defeat the Bolsheviks after the October Revolution, as well as the German politicians, police, soldiers and Freikorps who crushed the German Revolution of 1918–1919, were also counter-revolutionaries. The Bolshevik government tried to build an anti-revolutionary image for the Green armies composed of peasant rebels.[6] The largest peasant rebellion against Bolshevik rule occurred in 1920–21 in Tambov.

General Victoriano Huerta, and later the Felicistas, attempted to thwart the Mexican Revolution in the 1910s. In the late 1920s, Mexican Catholics took up arms against the Mexican Federal Government in what became known as the Cristero War. The President of Mexico, Plutarco Elias Calles, was elected in 1924. Calles began carrying out anti-Catholic policies which caused peaceful resistance from Catholics in 1926. The counter-revolution began as a movement of peaceful resistance against the anti-clerical laws. In the Summer of 1926, fighting broke out. The fighters known as Cristeros fought the government due to its suppression of the Church, jailing and execution of priests, formation of a nationalist schismatic church, state atheism, Socialism, Freemasonry and other harsh anti-Catholic policies.

The Black Eagles, the AUC, and other paramilitary movements of Colombia can also be seen as counter-revolutionary. These right-wing groups are opposition to the FARC, and other left-wing guerrilla movements.

Some counter-revolutionaries are former revolutionaries who supported the initial overthrow of the previous regime, but came to differ with those who ultimately came to power after the revolution. For example, some of the Contras originally fought with the Sandinistas to overthrow Anastasio Somoza, and some of those who oppose Castro also opposed Batista.

The anti-communist Kuomintang party in China used the term "counter-revolutionary" to disparage the communists and other opponents of its regime. Chiang Kai-shek, the Kuomintang party leader, was the chief user of this term.

The Kuomintang had several influences left upon its ideology by revolutionary thinking. The Kuomintang, and Chiang Kai-shek used the words "feudal" and "counter-revolutionary" as synonyms for evil, and backwardness, and proudly proclaimed themselves to be revolutionary.[7] Chiang called the warlords feudalists, and called for feudalism and counter-revolutionaries to be stamped out by the Kuomintang.[8][9][10][11] Chiang showed extreme rage when he was called a warlord, because of its negative, feudal connotations.[12]

Chiang also crushed and dominated the merchants of Shanghai in 1927, seizing loans from them, with the threats of death or exile. Rich merchants, industrialists, and entrepreneurs were arrested by Chiang, who accused them of being "counter-revolutionary", and Chiang held them until they gave money to the Kuomintang. Chiang's arrests targeted rich millionaires, accusing them of communism and counter-revolutionary activities. Chiang also enforced an anti-Japanese boycott, sending his agents to sack the shops of those who sold Japanese made items and fining them. He also disregarded the internationally protected International Settlement, putting cages on its borders in which he threatened to place the merchants. The Kuomintang's alliance with the Green Gang allowed it to ignore the borders of the foreign concessions.[13]

A similar term also existed in the People's Republic of China, which includes charges such collaborating with foreign forces and inciting revolts against the government. According to Article 28 of the Chinese constitution, The state maintains public order and suppresses treasonable and other counter-revolutionary activities; It penalizes actions that endanger public security and disrupt the socialist economy and other criminal activities, and punishes and reforms criminals.[14]

Usage of the term

The clerics who took power following the Iranian Revolution became counter-revolutionaries; after the revolution the Marxists were driven out of power by the mullahs. Thousands of political prisoners who opposed the Islamist regime were killed especially during the 1988 Massacre of Iranian Prisoners.

[In Moscow] May Day, 1932, dawned clear and bright... Hour after hour they marched by [in the May Day Parade] ... When not otherwise occupied I have a subconscious habit of counting. It had not been difficult to estimate the number of the military because of the regularity of their formations... I arrived at an approximate total of the paraders. That evening, I dined with friends at the Metropol Hotel. Among them was a new acquaintance, a Communist official. Quite innocently, I asked how many people they estimated had marched in the day's demonstration. Three of the party guessed. Each said a million. I was surprised at such unanimity. "Do you know that three hundred thousand would be a fairly close estimate?" I asked. The atmosphere of the room changed instantly. There was a dead silence of extreme tension. Then, like a whiplash, came the voice of the Communist official. "That's counter-revolutionary mathematics!" [bolding added] Startled for an instant, I laughed. "Mathematics," I said, "is independent of social orders. It is vital to know the truth." "Truth," sneered the Communist. "You do not understand truth as we do. With you it is only a bourgeois concept. With us it has a different meaning. 'Three hundred thousand' means nothing. When we go before the world and say a million workers marched in Red Square today, that means something. People understand the word 'million.' That is truth, from our point of view!"