Country Life is a British weekly magazine, based in London at 110 Southwark Street, and owned by IPC Media, a Time Inc. subsidiary. 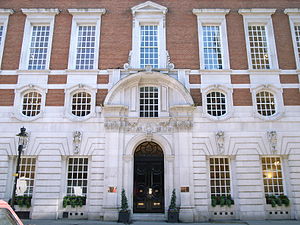 Country Life was launched in 1897,[2] incorporating Racing Illustrated. At this time it was owned by Edward Hudson, the owner of Lindisfarne Castle and various Lutyens-designed houses including The Deanery in Sonning. At that time golf and racing served as its main content, as well as the property coverage, initially of manorial estates, that has become its mainstay. Elizabeth Bowes-Lyon, the late Queen Mother, used to appear frequently on its front cover.

The frontispiece of each issue usually features a studio portrait photograph of a young woman from a landed British family, typically timed to coincide with the announcement of their marriage. Its subjects are popularly known as "Girls in Pearls", and show the enduring appeal of upper class British circles to a wider readership.

In 1997, the centenary of the magazine was celebrated by a special issue, the publishing of a book by Sir Roy Strong, the airing of a BBC2 TV programme on a year in the life of the magazine, and staging a Gold Medal winning garden at the Chelsea Flower Show. In 1999, the magazine launched its new website.

In 2007, the magazine celebrated its 110th anniversary with a special souvenir issue on 4 January.[3] Starting on Wednesday 7 May 2008 the magazine is issued each Wednesday, having been on sale each Thursday for the past 111 years, with the earlier day being achieved using electronic publishing technology, with the magazine retaining its usual Monday deadline.[4]

The first several dozen pages of each issue are devoted to colour advertisements for upmarket residential property, which are one of the best known attractions of the magazine, and popular with everyone from the super rich looking for a country house or estate to those who can only aspire to own such a property.

The magazine covers the pleasures and joys of rural life. It is primarily concerned with rural communities and their environments as well as the concerns of country dwellers and landowners and has a diverse readership which, although mainly UK based is also international. Much of its success has historically been built on its coverage of country house architecture and gardening at a time when the architectural press largely ignored this building type. An extensive photographic archive has resulted, now of great importance to architectural historians.

The other rural pursuits and interests covered include hunting, shooting, farming, equestrian news and gardening and there are regular news and opinion pieces as well as a firm engagement with rural politics. There are reviews of books, food and wine, art and architecture (also many offers) and antiques and crafts. Illustrative material includes the Tottering-by-Gently cartoon by Annie Tempest. The property section claims to have more prime agents than anywhere else.

Country Life announced the launch of The Country Life Fair, which is a two-day family event showcasing all that is great about British life and bringing the countryside to town. The fair was held in September 2014 at Fulham Palace, London. The 2015 show will take place in Battersea Park, London.