From Infogalactic: the planetary knowledge core
(Redirected from County of Kexholm)
Jump to: navigation, search
File:Sw BalticPr 17cen.jpg
Provinces of the Swedish Empire around
the Gulf of Finland in the 17th Century. 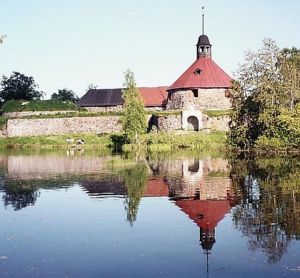 A photograph of the Castle of Kexholm at Priozersk.
File:Kexholms läns vapen under den svenska tiden, Nordisk familjebok.png
Coat of arms of the County of Kexholm.

Kexholm County (Swedish: Kexholms län, Finnish: Käkisalmen lääni) was a county of the Swedish Empire from 1634 to 1721, when the southern part was ceded to the Russian Empire in the Treaty of Nystad. The capital of the county was Kexholm (Finnish: Käkisalmi), which today is Priozersk.

The county was ceded to Sweden by Russia together with Ingria by the Treaty of Stolbovo in 1617. The county extended to the parishes of Lieksa in North and of Suojärvi in the East. In the South and West, the county was bordered by Viborg and Nyslott County.

After the Russian victory in the Finnish War in 1809, Sweden ceded all its territory in Finland to Russia by the Treaty of Fredrikshamn. As part of Russian Empire Finland became to constitute a separate grand duchy. In 1812 Russia made the territories of Vyborg Governorate part of the new Grand Duchy of Finland as Viipuri Province.