From Infogalactic: the planetary knowledge core
(Redirected from County of Viborg and Nyslott)
Jump to: navigation, search
File:Sw BalticPr 17cen.jpg
Provinces of the Swedish Empire around
the Gulf of Finland in the 17th Century.
File:Suecia 3-122 ; Viborg omkring år 1700.jpg
An engraving of Viborg Castle from Suecia antiqua et hodierna. 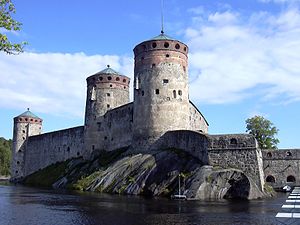 A photograph of St. Olaf's Castle at Nyslott.

The county was established in 1634 as Karelia County (Swedish: Karelens län, Finnish: Karjalan lääni), but in 1641 Nyslott County (Swedish: Nyslotts län, Finnish: Savonlinnan lääni) was broken out and made a separate entity. Remainder of Karelia County was now called Viborg County. In 1650 the counties were joined again as the Viborg and Nyslott County.

After the Russian victory in the Finnish War in 1809, Sweden ceded all its territory in Finland to Russia by the Treaty of Fredrikshamn. As part of Russian Empire Finland became to constitute a separate grand duchy. In 1812 Russia made the territories of Vyborg Governorate part of the new Grand Duchy of Finland as Viipuri Province.