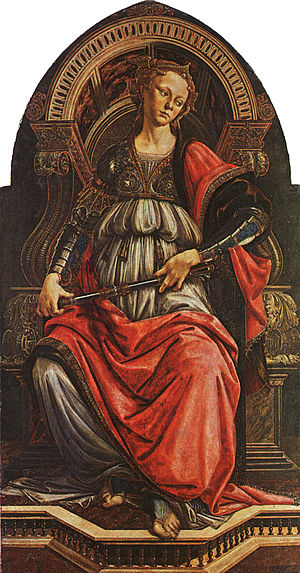 Courage (also called bravery and bravado) is the choice and willingness to confront agony, pain, danger, uncertainty or intimidation. Physical courage is courage in the face of physical pain, hardship, death or threat of death, while moral courage is the ability to act rightly in the face of popular opposition, shame, scandal, discouragement, or personal loss.

Western antiquity and the Middle Ages

There is a tradition moving back to Ancient Greek philosophy for counting courage or fortitude as one of the four cardinal virtues, along with prudence, justice, and temperance. ("Cardinal" in this sense means "pivotal"; it is one of the four cardinal virtues because to possess any virtue, a person must be able to sustain it in the face of difficulty.)

An early Greek philosopher, Plato (c. 428 BC – c. 348 BC),[1] set the groundwork for how courage would be viewed to future philosophers. Plato’s early writings found in Laches show a discussion on courage, but fail to come to a satisfactory conclusion on what courage is. During the debate between three leaders, including Socrates, many definitions of courage are mentioned.

While many definitions are given in Plato’s Laches, all are refuted, giving a reader a sense of Plato’s argument style. Laches is an early writing of Plato’s, which may be a reason he does not come to a clear conclusion. In this early writing, Plato is still developing his ideas and shows influence from his teachers like Socrates.

In one of his later writings, The Republic, Plato gives more concrete ideas of what he believes courage to be. Civic courage is described as a sort of perseverance – "preservation of the belief that has been inculcated by the law through education about what things and sorts of things are to be feared".[5] Ideas of courage being perseverance also are seen in Laches. Plato further explains this perseverance as being able to persevere through all emotions, like suffering, pleasure, and fear.[6]

As a desirable quality, courage is discussed broadly in Aristotle's Nicomachean Ethics, where its vice of shortage is cowardice and its vice of excess is recklessness.[7]

In the Roman Empire, courage formed part of the universal virtue of virtus.[8] Roman philosopher and statesman Cicero (106–43 BC) lists the cardinal virtues, but does not name them such:

Virtue may be defined as a habit of mind (animi) in harmony with reason and the order of nature. It has four parts: wisdom (prudentiam), justice, courage, temperance. (De Inventione, II, LIII)

In medieval virtue ethics, championed by Averroes and Thomas Aquinas and still important to Roman Catholicism, courage is referred to as "Fortitude".[9]

According to Thomas Aquinas,[10]

Among the cardinal virtues, prudence ranks first, justice second, fortitude third, temperance fourth, and after these the other virtues.

Part of his justification for this hierarchy is that

Fortitude without justice is an occasion of injustice; since the stronger a man is the more ready is he to oppress the weaker.

The term "fortitude" can be taken in two ways. First, as simply denoting a certain firmness of mind, and in this sense it is a general virtue, or rather a condition of every virtue, since as the Philosopher states (Ethic. ii), it is requisite for every virtue to act firmly and immovably. Secondly, fortitude may be taken to denote firmness only in bearing and withstanding those things wherein it is most difficult to be firm, namely in certain grave dangers. Therefore Tully says (Rhet. ii), that "fortitude is deliberate facing of dangers and bearing of toils." On this sense fortitude is reckoned a special virtue, because it has a special matter.

Aquinas holds fortitude or courage as being primarily about endurance, not attack:[12]

As stated above (Article 3), and according to the Philosopher (Ethic. iii, 9), "fortitude is more concerned to allay fear, than to moderate daring." For it is more difficult to allay fear than to moderate daring, since the danger which is the object of daring and fear, tends by its very nature to check daring, but to increase fear. Now to attack belongs to fortitude in so far as the latter moderates daring, whereas to endure follows the repression of fear. Therefore the principal act of fortitude is endurance, that is to stand immovable in the midst of dangers rather than to attack them.

The Tao Te Ching states that courage is derived from love ("慈 loving 故 causes 能 ability 勇 brave") and explains: "One of courage, with audacity, will die. One of courage, but gentle, spares death. From these two kinds of courage arise harm and benefit."[13][14]

Islamic beliefs also present courage and self-control as a key factor in facing the Devil and in some cases Jihad to a lesser extent; many believe this because of the courage (through peace and patience) the Prophets of the past displayed against people who despised them for their beliefs.

Thomas Hobbes lists virtues into the categories of moral virtues and virtues of men in his work "Man and Citizen." Hobbes outlines moral virtues as virtues in citizens, that is virtues that without exception are beneficial to society as a whole. These moral virtues are justice (i.e. not violating the law) and charity. Courage as well as prudence and temperance are listed as the virtues of men. By this Hobbes means that these virtues are invested solely in the private good as opposed to the public good of justice and charity. Hobbes describes courage and prudence as a strength of mind as opposed to a goodness of manners. These virtues are always meant to act in the interests of individual while the positive and/or negative effects of society are merely a byproduct. This stems forth from the idea put forth in "Leviathan" that the state of nature is "solitary, poor, nasty, brutish and short." According to Hobbes courage is a virtue of the individual in order to ensure a better chance of survival while the moral virtues address Hobbes's social contract which civilized men display (in varying degrees) in order to avoid the state of nature. Hobbes also uses the idea of fortitude as an idea of virtue. Fortitude is "to dare" according to Hobbes, but also to "resist stoutly in present dangers." This a more in depth elaboration of Hobbes's concept of courage that is addressed earlier in "Man and Citizen." This idea relates back to Hobbes's idea that self-preservation is the most fundamental aspect of behavior.

David Hume listed virtues into two categories in his work A Treatise of Human Nature as artificial virtues and natural virtues. Hume noted in the Treatise that courage is a natural virtue. In the Treatise's section Of Pride and Humility, Their Objects and Causes, Hume clearly stated courage is a cause of pride: "Every valuable quality of the mind, whether of the imagination, judgment, memory or disposition; wit, good-sense, learning, courage, justice, integrity; all these are the cause of pride; and their opposites of humility" (Hume 434).

Hume also related courage and joy to have positive effects on the soul: "(...) since the soul, when elevated with joy and courage, in a manner seeks opposition, and throws itself with alacrity into any scene of thought or action, where its courage meets with matter to nourish and employ it" (Hume 666). Along with courage nourishing and employing, Hume also wrote that courage defends humans in the Treatise: "We easily gain from the liberality of others, but are always in danger of losing by their avarice: Courage defends us, but cowardice lays us open to every attack" (Hume 459).

Hume wrote what excessive courage does to a hero's character in the Treatise's section "Of the Other Virtues and Vices": "Accordingly we may observe, that an excessive courage and magnanimity, especially when it displays itself under the frowns of fortune, contributes in a great measure, to the character of a hero, and will render a person the admiration of posterity; at the same time, that it ruins his affairs, and leads him into dangers and difficulties, with which otherwise he would never have been acquainted" (Hume 900).

Other understandings of courage that Hume offered can be derived from Hume's views on morals, reason, sentiment, and virtue from his work An Enquiry Concerning the Principles of Morals.

Søren Kierkegaard opposed courage to angst, while Paul Tillich opposed an existential courage to be to non-being, fundamentally equating it with religion:

Courage is the self-affirmation of being in spite of the fact of non-being. It is the act of the individual self in taking the anxiety of non-being upon itself by affirming itself ... in the anxiety of guilt and condemnation. ... every courage to be has openly or covertly a religious root. For religion is the state of being grasped by the power of being itself.[15]

J.R.R. Tolkien identified in his 1936 lecture "Beowulf: The Monsters and the Critics" a "Northern 'theory of courage'"—the heroic or "virtuous pagan" insistence to do the right thing even in the face of certain defeat without promise of reward or salvation:

It is the strength of the northern mythological imagination that it faced this problem, put the monsters in the centre, gave them victory but no honor, and found a potent and terrible solution in naked will and courage. 'As a working theory absolutely impregnable.' So potent is it, that while the older southern imagination has faded forever into literary ornament, the northern has power, as it were, to revive its spirit even in our own times. It can work, as it did even with the goðlauss Viking, without gods: martial heroism as its own end.[16]

Virtuous pagan heroism or courage in this sense is "trusting in your own strength," as observed by Jacob Grimm in his Teutonic Mythology,

Men who, turning away in utter disgust and doubt from the heathen faith, placed their reliance on their own strength and virtue. Thus in the Sôlar lioð 17 we read of Vêbogi and Râdey â sik þau trûðu, "in themselves they trusted."[17]

Winston Churchill stated, "Courage is rightly esteemed the first of human qualities because it is the quality that guarantees all others."

In Beyond Good and Evil, Friedrich Nietzsche describes master-slave morality, in which a noble man regards himself as a "determiner of values;" one who does not require approval, but passes judgment. Later, in the same text, he lists man's four virtues as “courage, insight, sympathy, and solitude,” and goes on to emphasize the importance of courage: "The great epochs of our life are the occasions when we gain the courage to re-baptize our evil qualities as our best qualities."[19]

Its accompanying animal is the lion. Often, fortitude is depicted as having tamed the ferocious lion. Cf. e.g. the Tarot trump called Strength. It is sometimes seen in the Catholic Church as a depiction of Christ's triumph over sin (see Revelation 5:5). It also is a symbol in some cultures as a savior of the people who live in a community with sin and corruption.

Associations in popular culture between courage and masculinity has resulted in usages of synonymous terms such as "having balls".