A cousin is a relative with whom a person shares one or more common ancestors. In the general sense, cousins are two or more generations away from any common ancestor, thus distinguishing a cousin from an ancestor, descendant, sibling, aunt, uncle, niece, or nephew. However, in common parlance, "cousin" normally specifically means "first cousin".

Systems of "degrees" and "removals" are used in the English-speaking world to describe the exact relationship between two cousins (in the broad sense) and the ancestor they have in common. Various governmental entities have established systems for legal use that can more precisely specify kinships with common ancestors existing any number of generations in the past, though common usage often eliminates the degrees and removals and refers to people with common ancestry as simply "distant cousins" or "relatives".

The ordinals in the terms "first cousins", "second cousins", "third cousins", refer to the number of generations to one's closest common ancestor.[1] The number of "G" words used to describe this ancestor will determine how close the relationship is. For example, having "Great-Great-Grandparents" in common would be third cousins.

Kissing cousins are defined by the Oxford English Dictionary as "relatives or friends with whom one is on close enough terms to greet with a kiss".[3] 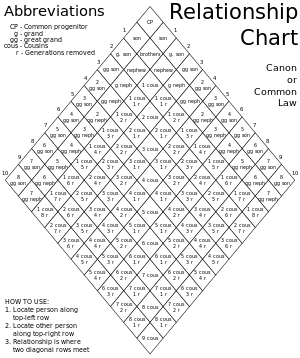 Canon Law Relationship Chart. See an example of how to use chart.

Another visual chart used in determining the legal relationship between two people who share a common ancestor is based upon a diamond shape, usually referred to as a "canon law relationship chart".

The chart is used by placing the "common progenitor" (the most recent person from whom both people (A and B) are descended) in the top space in the diamond-shaped chart, and assigning a direction (arbitrarily, left or right) to each of the two people, A and B. Then follow the line down the outside edge of the chart for each of the two people until their respective relationship to the common ancestor is reached. Upon determining that place along the opposing outside edge for each person, their relationship is then determined by following the lines inward to the point of intersection. The information contained in the common "intersection" defines the relationship.

For a simple example, in the illustration to the right, if two siblings use the chart to determine their relationship, their common parent (either one, if there are two) is placed in the topmost position, and each child is assigned the space below and along the outside of the chart. Then, following the spaces inward, they would intersect in the "brother" diamond.[5] If their children want to determine their relationship, they would follow the path established by their parents but descend an additional step below along the outside of the chart (showing that they are grandchildren of the common progenitor); following their respective lines inward, they would come to rest in the space marked "1st cousin". In cases where one side descends the outside of the diamond further than the other side because of additional generations removed from the common progenitor, following the lines inward shows both the cousin rank (1st cousin, 2nd cousin) plus the number of times (generations) "removed".

In the example provided at the right, generations one (child) through ten (8th great-grandchild) from the common progenitor are provided; however, the format of the chart can easily be expanded to accommodate any number of generations needed to resolve the question of relationship.