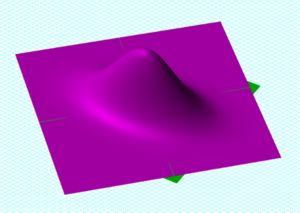 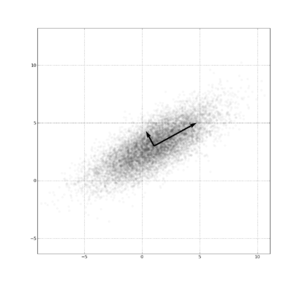 Sample points from a multivariate Gaussian distribution with a standard deviation of 3 in roughly the lower left-upper right direction and of 1 in the orthogonal direction. Because the x and y components co-vary, the variances of x and y do not fully describe the distribution. A 2×2 covariance matrix is needed; the directions of the arrows correspond to the eigenvectors of this covariance matrix and their lengths to the square roots of the eigenvalues.

In probability theory and statistics, a covariance matrix (also known as dispersion matrix or variance–covariance matrix) is a matrix whose element in the i, j position is the covariance between the i th and j th elements of a random vector (that is, of a vector of random variables). Each element of the vector is a scalar random variable, either with a finite number of observed empirical values or with a finite or infinite number of potential values specified by a theoretical joint probability distribution of all the random variables.

Intuitively, the covariance matrix generalizes the notion of variance to multiple dimensions. As an example, the variation in a collection of random points in two-dimensional space cannot be characterized fully by a single number, nor would the variances in the x and y directions contain all of the necessary information; a 2×2 matrix would be necessary to fully characterize the two-dimensional variation.

If the entries in the column vector

is the expected value of the ith entry in the vector X. In other words,

The inverse of this matrix,

is the inverse covariance matrix, also known as the concentration matrix or precision matrix;[1] see precision (statistics). The elements of the precision matrix have an interpretation in terms of partial correlations and partial variances.[citation needed]

Generalization of the variance

The definition above is equivalent to the matrix equality

This form can be seen as a generalization of the scalar-valued variance to higher dimensions. Recall that for a scalar-valued random variable X

Indeed, the entries on the diagonal of the covariance matrix

are the variances of each element of the vector

A quantity closely related to the covariance matrix is the correlation matrix, the matrix of Pearson product-moment correlation coefficients between each of the random variables in the random vector

, which can be written

is the matrix of the diagonal elements of

(i.e., a diagonal matrix of the variances of

Equivalently, the correlation matrix can be seen as the covariance matrix of the standardized random variables

Each element on the principal diagonal of a correlation matrix is the correlation of a random variable with itself, which always equals 1. Each off-diagonal element is between 1 and –1 inclusive.

the variance of the random vector

However, the notation for the cross-covariance between two vectors is standard:

The var notation is found in William Feller's two-volume book An Introduction to Probability Theory and Its Applications,[2] but both forms are quite standard and there is no ambiguity between them.

is also often called the variance-covariance matrix since the diagonal terms are in fact variances.

are q×p matrices of constants.

This covariance matrix is a useful tool in many different areas. From it a transformation matrix can be derived, called a whitening transformation, that allows one to completely decorrelate the data[citation needed] or, from a different point of view, to find an optimal basis for representing the data in a compact way[citation needed] (see Rayleigh quotient for a formal proof and additional properties of covariance matrices). This is called principal components analysis (PCA) and the Karhunen-Loève transform (KL-transform).

can be written in block form

then the conditional distribution for

The matrix ΣYXΣXX−1 is known as the matrix of regression coefficients, while in linear algebra ΣY|X is the Schur complement of ΣXX in ΣX,Y

The matrix of regression coefficients may often be given in transpose form, ΣXX−1ΣXY, suitable for post-multiplying a row vector of explanatory variables xT rather than pre-multiplying a column vector x. In this form they correspond to the coefficients obtained by inverting the matrix of the normal equations of ordinary least squares (OLS).

As a linear operator

Applied to one vector, the covariance matrix maps a linear combination, c, of the random variables, X, onto a vector of covariances with those variables:

. Treated as a bilinear form, it yields the covariance between the two linear combinations:

. The variance of a linear combination is then

, its covariance with itself.

which induces the Mahalanobis distance, a measure of the "unlikelihood" of c.[citation needed]

Which matrices are covariance matrices?

From the identity just above, let

How to find a valid correlation matrix

In some applications (e.g., building data models from only partially observed data) one wants to find the "nearest" correlation matrix to a given symmetric matrix (e.g., of observed covariances). In 2002, Higham[5] formalized the notion of nearness using a weighted Frobenius norm and provided a method for computing the nearest correlation matrix.

where the complex conjugate of a complex number

; thus the variance of a complex number is a real number.

is a column-vector of complex-valued random variables, then the conjugate transpose is formed by both transposing and conjugating. In the following expression, the product of a vector with its conjugate transpose results in a square matrix, as its expectation:

denotes the conjugate transpose, which is applicable to the scalar case since the transpose of a scalar is still a scalar. The matrix so obtained will be Hermitian positive-semidefinite,[6] with real numbers in the main diagonal and complex numbers off-diagonal.

are centred data matrices of dimension n-by-p and n-by-q respectively, i.e. with n rows of observations of p and q columns of variables, from which the column means have been subtracted, then, if the column means were estimated from the data, sample correlation matrices

can be defined to be

or, if the column means were known a-priori,

As a parameter of a distribution

If a vector of n possibly correlated random variables is jointly normally distributed, or more generally elliptically distributed, then its probability density function can be expressed in terms of the covariance matrix.[citation needed]

The covariance matrix plays a key role in financial economics, especially in portfolio theory and its mutual fund separation theorem and in the capital asset pricing model. The matrix of covariances among various assets' returns is used to determine, under certain assumptions, the relative amounts of different assets that investors should (in a normative analysis) or are predicted to (in a positive analysis) choose to hold in a context of diversification.