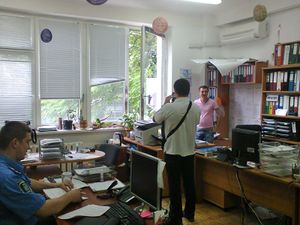 Kiev police investigating a burglary in May 2014.

Crime in Ukraine is combated by the Ukrainian Police and other agencies.

Corruption is a widespread and growing problem in Ukrainian society.[2][3] In 2014's Transparency International Corruption Perceptions Index Ukraine was ranked 142nd out of the 175 countries investigated (tied with Uganda and the Comoros).[4]

Bribes are given to ensure that public services are delivered either in time or at all.[5] Ukrainians stated they give bribes because they think it is customary and expected.[5][6] According to a 2008 Management Systems International (MSI) sociological survey, the highest corruption levels were found in vehicle inspection (57.5%), the police (54.2%), health care (54%), the courts (49%) and higher education (43.6%).[7] On June 8, 2011 Ukrainian President Viktor Yanukovych stated that corruption costs the state budget US$2.5 billion in revenues annually and that through corrupt dealings in public procurement 10% to 15% (US$7.4 billion) of the state budget "ends up in the pockets of officials".[8]

According to the United States Agency for International Development (USAID), the main causes of corruption in Ukraine are a weak justice system and an over-controlling non-transparent government combined with business-political ties and a weak civil society.[9] Corruption is regularly discussed in the Ukrainian media.[10][11]