From Infogalactic: the planetary knowledge core
Jump to: navigation, search
Not to be confused with Crimean War, Crimean Campaign, or Crimean campaigns of 1687 and 1689.

The Crimean Offensive (8 April – 12 May 1944), known in German sources as the Battle of the Crimea, was a series of offensives by the Red Army directed at the German-held Crimea. The Red Army's 4th Ukrainian Front engaged the German 17th Army of Army Group A, which consisted of Wehrmacht and Romanian formations. The battles ended with the evacuation of the Crimea by the Germans. German and Romanian forces suffered considerable losses during the evacuation. 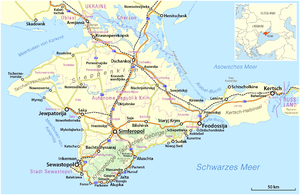 During late 1943 and early 1944, the Wehrmacht was pressed back along its entire front line in the east. In October 1943, the 17th Army withdrew from the Kuban bridgehead across the Kerch Strait into the Crimea. During the following months, the Red Army pushed back the Wehrmacht in southern Ukraine, eventually cutting off the land-based connection of 17th Army through the Perekop Isthmus in November 1943.

The Wehrmacht was able to successfully hold on to the Crimea even after it had been cut off by land due to their ability to supply it via the Black Sea. Holding the Crimea was considered important as its loss would negatively affect the attitude of Turkey and put Romanian oilfields under risk of Soviet air attacks.

Aside from Soviet landings across the Kerch Strait and in the north-eastern sector near Sivash at the end of 1943, the Soviet Army largely ignored the Crimea for the next five months.

Von Kleist was removed from command of Army Group A in March, 1944. There was no successor that replaced him. From then on Erwin Jaenicke theoretically controlled both 17th Army and Army Group A, though by this time the army group only consisted of the 17th Army.

Progress of the battle

An assault across the Perekop Isthmus was launched on 8 April by elements of the 4th Ukrainian Front's 2nd Guards and 51st Armies.[4] The 17th Army defended but was unable to stop the advance. Kerch was reached by the Separate Coastal Army on 11 April; Simferopol, about 37 mi (60 km) northeast of Sevastopol, followed two days later. The 17th Army was retreating toward Sevastopol by 16 April,[4] with remaining Axis forces in the Crimea concentrating around the city by the end of the third week of April.

At Sevastopol stands the Seventeenth Army, and at Sevastopol, the Soviets will bleed to death.

The OKH intended to hold Sevastopol as a fortress, as the Red Army had done during the first Crimean campaign in 1941–42. However, the fortifications of the city had never been restored and Sevastopol was not the strong defensive position that it had been in 1941. Fighting broke out in the city outskirts towards the end of April and the city fell on 9 May, less than a month after the start of the offensive. The Axis sea evacuation to Constanța was attacked by Soviet land-based bombers.[4] The last Axis pockets in the Crimea were destroyed on 12 May.

In a meeting with Adolf Hitler in Berchtesgaden, Jaenecke had insisted that Sevastopol should be evacuated and his cut off Army of 235,000 men withdrawn. After the loss of the Crimea, he was held responsible, arrested in Romania and court-martialed. Only the intervention of Heinz Guderian saved his life. He was dismissed from the army on 31 January 1945.

The German and Romanian formations suffered the loss of 57,000 men, many of whom drowned during the evacuation. The sinking of the Totila and Teja on 10 May alone caused up to 10,000 deaths. The table below is based on information from Glantz/House When Titans Clashed.[citation needed]: