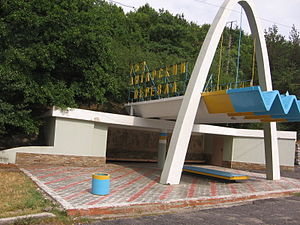 Crimean Trolleybus Line (Russian: Крымский троллейбус, Crimean Tatar: Qırım trolleybusı) in Republic of Crimea is the longest trolleybus line in the world.[1][2] It is 86 kilometres (53 mi) long,[3] between the republic's capital, Simferopol, and the coastal city of Yalta on the Black Sea.

Managed by the public transport company Krymtrolleybus, it was built in 1959 in the Ukrainian SSR as an alternative to extending the railway line in Simferopol over the mountains to the coast. It opened in two parts: Simferopol–Alushta in 1959 and Alushta–Yalta in 1961. The journey time to Alushta is about ​1 1⁄2 hours, to Yalta about ​2 1⁄2 hours, and the fare is about 15 hryvnias (since March 2014—58 rubles).[1]

It passes through the Crimean Mountains across the Angarskyi Pass, reaching 752 metres (2,500 ft) at the highest point, then descends to the resort town of Alushta on the coast.[1] The remaining distance to Yalta is 41 kilometres (25 mi) and winds around the mountains above the sea.