Croatian–Hungarian Settlement (Croatian: Hrvatsko-ugarska nagodba, Hungarian: Horvát–magyar kiegyezés, German: Kroatisch-Ungarischer Ausgleich) was a pact signed in 1868, that governed Croatia's political status in the Hungarian-ruled part of Austria-Hungary.[1] It lasted until the end of World War I, when the Croatian Parliament, as the representative of the historical sovereignty of Croatia, on October 29, 1918 adopted a decision on the cessation of all state and legal ties with the old Austria-Hungary.[2] 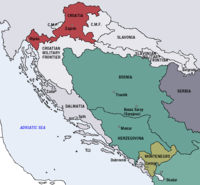 The borders of Croatian crownlands before the Settlement.

Before the Revolutions of 1848 in the Habsburg areas and the notable actions of Croatian Ban Josip Jelačić, the northern Croatian lands were divided into the Kingdom of Croatia and the Kingdom of Slavonia as separate Habsburg crown lands, recognized as Lands of the Crown of St. Stephen and under the jurisdiction of the Kingdom of Hungary, but effectively functioned a single kingdom subordinate to the central government in Vienna. After 1849, Slavonia and Croatia continued to function in the same capacity.[3] Imperial officials referred to this kingdom simply as the Kingdom of Croatia-Slavonia.[4]

The southern Croatian land, the Kingdom of Dalmatia, was formed from the southern parts of the Illyrian Provinces that the Habsburg Monarchy conquered from the French Empire in 1815 and it remained a separate administrative division of the Austrian part of Monarchy.

When the Ausgleich, or Compromise, of 1867 created the Austro-Hungarian Dual Monarchy, the Habsburg crownlands of Croatia and Slavonia were effectively merged and placed under Hungarian jurisdiction. Levin Rauch became the acting ban of Croatia, replacing Josip Šokčević.

Ban Rauch prepared a new electoral law that was imposed by the king on October 20, 1867, that reduced the number of elected representatives to 66 and increased the number of unelected ones (the so-called virilist members).[5] In the subsequent election, held from November 19 to December 23, 1867, the People's Party won only 14 seats, and Rauch's Unionist Party had obtained a majority in the Sabor. Although many Croats who sought full autonomy for the South Slavs of the empire objected to that arrangement, that questionable session of Sabor confirmed the subordination of Croatia to Hungary by accepting the Nagodba on 24 September 1868.[1] 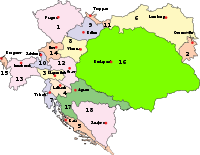 The Settlement confirmed the existing territorial distinction between Croatia-Slavonia, number 17, and the remainder of the Kingdom of Hungary. Dalmatia, number 5, was the other Croatian kingdom within Austria-Hungary. 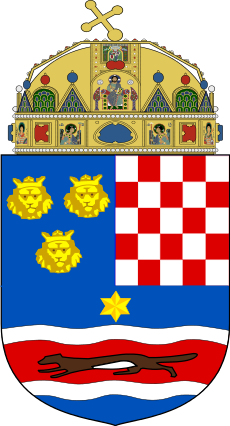 An agreement was reached between the Parliament of Hungary on the one hand and the Parliament of Croatia on the other hand, with regard to composing by a joint enactment the constitutional questions at issue between them. After the settlement was confirmed, enforced and sanctioned by His Imperial and Apostolic Royal Majesty, it was thereby inarticulated as a joint fundamental law of Hungary and of Croatia, Slavonia and Dalmatia.[6]

With this compromise the parliament of personal union (in which Croatia-Slavonia had only twenty-nine deputies) controlled the military, the financial system, legislation and administration, Sea Law, Commercial Law, the law of Bills of Exchange and Mining Law, and generally matters of commerce, customs, telegraphs, Post Office, railways, harbors, shipping, and those roads and rivers which jointly concern Hungary and Croatia-Slavonia.[7]

The manner by which Article 66 was handled left the issue of the port of Rijeka (Fiume) unresolved. Croatia saw it as part of its territory, but Hungary saw it as Corpus separatum.