The Croatian Air Force and Air Defence (Croatian: Hrvatsko ratno zrakoplovstvo i protuzračna obrana) is a branch of the Croatian Armed Forces.

The Croatian Air Force as it is known today was established on 12 December 1991, during the Croatian War of Independence. After 2003, a large portion of the fleet was modernized or completely overhauled and the rest of the outdated fleet was retired. Croatia also acquired new-build transport helicopters, fire-fighting aircraft and basic training aircraft during this time. The planned acquisitions for additional fixed- and rotary-wing transports and fighter aircraft were, after repeated postponements, cancelled due to a difficult economic situation.

Commanders of the Croatian Air Force since its establishment in 1991: 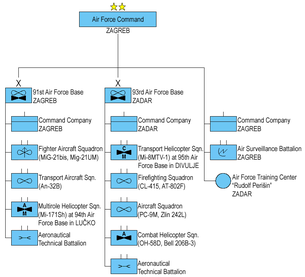 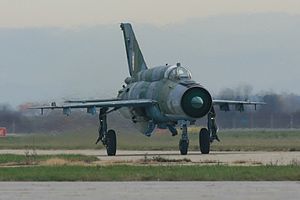 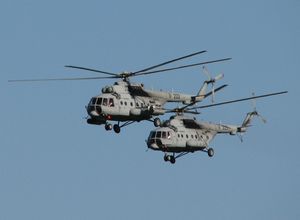 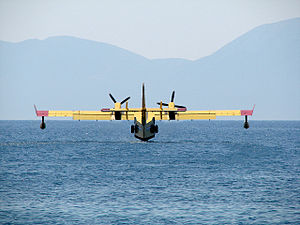 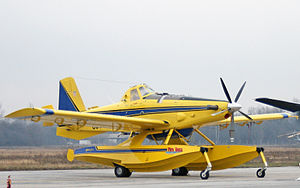 The core of the air force is a squadron of 12 modernized MiG-21bisD/UMD fighters. In 2003, a minor upgrade and an extensive overhaul were performed in Romania, incorporating navigation and communication elements of the Lancer standard to make them interoperable with NATO air forces. The aircraft received no upgrade to their weapons systems. Despite initial plans to replace the MiG-21 fleet with a multirole aircraft in 2013 (delayed from 2011 due to the financial crisis) and an official tender having been issued in 2008, ongoing budgetary constraints have resulted in an abandonment of these plans. As a cost-saving measure, a decision was made to again overhaul seven serviceable airframes already in service and supplement them with five additional airframes from Ukrspetsexport. This temporary measure will see the fleet remain in service only until 2019-2020.

Pilot training is conducted on two types of aircraft. During late 2007, five new Zlin 242L Aerobatic basic trainers were acquired in order to replace a fleet of seven old Utva 75s (four had already been retired previously). The deal was worth just under $2 million. An option for three additional basic trainers was considered but has not been exercised. The backbone of the training fleet, however, is built around 20 Pilatus PC-9M advanced trainers which also constitute the most numerous type of aircraft in Croatian service. These were ordered in 1997 (3 were former RAAF PC-9A examples converted to PC-9M standard immediately upon delivery) and entered full service a year later. The deal was worth around $100 million. They are also operated by the national aerobatic team called Krila Oluje / Wings of Storm. The current fleet size and facilities at Zemunik airbase allow the Croatian Air Force to offer advanced pilot training to other countries but the lack of HUDs, HOTAS and hardpoints on Croatia's PC-9Ms, however, limits the usefulness of Croatia's advanced training programme. Such upgrades might be financially plausible once surplus PC-9Ms get sold. Nonetheless, on March 5, 2014, representatives of the Croatian Air Force signed an agreement with their partners from the Royal Air Force of Oman for the future training and education of 16 Omani pilots on the Croatian fleet of Pilatus PC-9Ms. The training itself started on March 10, is planned to be concluded by December 26, 2014 and will see each pilot log 150 flight hours during the ten-month period. As a cost-saving measure, the Croatian government has announced in its long-term defence plan that it plans to downsize the PC-9M fleet to a "suitable level" for the current air force fleet, substantially reduced since the mid-1990s. Consequently, six oldest units are offered for sale while the 14 remaining aircraft are due to remain active and possibly undergo an upgrade.

The Croatian Air Force operated two Antonov An-32B tactical transports (built in 1991 and 1993) until 2013. Both aircraft underwent a two-stage modernization in 2004 and 2007. They were fitted with NATO-standard navigational and communication equipment, additional systems for loading/unloading and flare dispensers. They had performed humanitarian and paratrooper missions as well as supporting Croatia's international military commitments such as for ISAF and KFOR. Due to budget limitations both aircraft have been offered for sale.[3] In the draft of the strategic defence review, the Croatian government announced that no new tactical transport aircraft would be purchased before 2020 leaving Croatia reliant on its NATO partners for fixed-wing transport.

The helicopter fleet is equipped mainly with Russian-built Mi-17s and its derivates. The fleet includes three Mi-8 and 11 Mi-8MTV-1 (also known as Mi-17-1V) cargo helicopters, which underwent overhauls between 2003 and 2005. A batch of 6 Mi-8MTV-1 underwent an overhaul again in 2013 and 2014, while the remaining 8 units are to follow in 2014 and 2015. The Croatian Ministry od Defence is currently considering the option of selling all Mi-8 helicopters upon overhaul and replacing them with up to 15 UH-60L after 2017.[4]

In 2006, a deal to deliver 10 new Mi-171Sh transport-attack helicopters was signed with Russia, itself a partial payment for an old Russian debt. The order itself was worth $66 million. The new type differs from the ones already in service in having a cargo ramp instead of clamshell doors, larger side doors, flare dispensers, additional armor around the cockpit and cargo compartment, night vision device equipment, door gunner posts, rocket launchers etc. The entire squadron of 10 helicopters entered service by July, 2008. Two additional VIP helicopters were planned for 2009 but their acquisition was cancelled.

After more than 10 years in the Croatian service and great success in Operation Storm, the government finally decided to retire a squadron of seven Mi-24V helicopters in 2005 due to a costly modernization. Six are offered for sale at a price of $83,000 per aircraft, while one was sent to a museum. The role of an armed support helicopter was taken over by new Mi-171s but the entire attack helicopter squadron is to be revived in 2015 with the acquisition of up to 16 OH-58D.[4]

While visiting Israel in November 2006, Croatian delegation agreed to buy two mid-size, state-of-the-art Hermes 450 and four small Skylark UAVs. Additional cameras, computer systems, spare parts and a ground station were also obtained. Two additional Skylark UAVs entered service in 2009. As of December 2012, additional Skylarks has been reported in service though no public records or images of Croatian Hermes 450 are available. This suggests that the order was cancelled due to funding issues.

After a horrible fire season during the summer of 2007 (12 firefighters lost their lives on a small island of Kornati), Croatia agreed to buy two new Canadair CL-415 and five Air Tractor AT-802 water bombers. These joined a fleet of four relatively new amphibians already in service. The entire deal was projected at $70 million. By making such an acquisition, Croatia became the leading power in aerial firefighting on the Mediterranean in respect to its population and surface.

Although the MiG-21 was perceived as an outdated fighter by the Croatian Air Force even in the late 1990s, budget constraints have been continuously deferring any final decision on the acquisition of a new fighter type. Seen as Croatia was no longer facing any military threat by 1999, serious talks were started with Israeli firms to extensively upgrade the fleet of 24 MiG-21bis/UM fighters to a "Lancer 3" standard instead of buying a completely new combat aircraft. Although the initial information suggested that such a decision was practically final, no agreement was reached. By late 2002, all MiG-21s, however, were reaching the end of their service lives and it was decided that the fleet be overhauled and lightly upgraded in Romania. A squadron of 12 older aircraft (produced between 1972 and 1976) was therefore sent for 10-year life prolongment repairs to Aerostar after which a second squadron of 12 younger airframes (produced between 1977 and 1981) was to follow. After the first squadron arrived to Croatia, no further moves were made in order to revamp the second squadron and the aircraft belonging to it were left to rot under the open sky at Pleso Airbase in Zagreb. Ironically, by not proceeding with the initial plans to repair both squadrons, Croatia invested money into those aircraft that were older and in worse condition while the younger and better preserved MiGs were literally destined to decay.

Seen as the fleet of 12 overhauled MiG-21s was originally planned to remain active only until late 2011, Croatia was eyeing a replacement aircraft already by late 2008. It was projected that a new type be selected by late 2009 and that first aircraft start entering service by 2011. Such plans were put into question by the arrival of the global economic crisis which severely affected the Croatian economy and in late 2010 it was officially unveiled that no new aircraft were envisaged to enter service. Perisistant efforts from various parties to convince the Croatian Government to buy new or second-hand aircraft kept the possibility of such an event really occurring - viable. After numerous offers (among which for up to 20 German F-4 Phantoms, new or second-hand Swedish Saab Gripens, Dutch and American F-16s, retired Hungarian MiG-29s, even French Mirage F-1s) the Defence Ministry finally announced in June 2013 that the Ukrainian firm Ukrspetsexport will provide Croatia with 8 single-seat and 4 twin-seat upgraded MiG-21 aircraft. Due to their condition only 7 of these will be refurbished Croatian air frames and the remaining 5 will be '"new'" aircraft. These are to remain in service by 2020 but the decision on the replacement fighter type is to be made by the end of 2016. [5] [6] 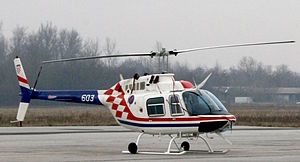 Aircraft that have been retired