From Infogalactic: the planetary knowledge core
Jump to: navigation, search
This article is about the general phenomenon of crowds. For the psychological and sociological term referring to adolescent peer groups, see Crowds (adolescence).
For other uses, see Crowd (disambiguation).
File:Crowd in street.jpg
A crowd of people returning from a show of fireworks spills into the street stopping traffic at the intersection of Fulton Street and Gold Street in Lower Manhattan 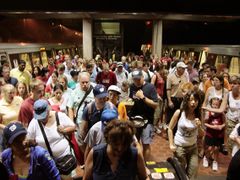 A crowd leaves the Vienna station on the Washington Metro in 2006.

A crowd is a large group of people that are gathered or considered together. A crowd may be definable through a common purpose or set of emotions, such as at a political rally, a sports event, or during looting (this is known as a psychological crowd), or may simply be made up of many people going about their business in a busy area. The term "the crowd" may sometimes refer to the lower orders of people in general.

The term "crowd" is sometimes defined in contrast to other group nouns for collections of humans or animals, such as aggregation, audience, group, mass, mob, populous, public, rabble and throng. Opinion researcher Vincent Price compares masses and crowds, saying that "Crowds are defined by their shared emotional experiences, but masses are defined by their interpersonal isolation."[1]

In human sociology, the term "mobbed" simply means "extremely crowded", as in a busy mall or shop. "Mobbing", carries a more negative connotation associated with bullying. In animal behaviour, mobbing is a technique where many individuals of one species "gang up" on a larger individual of another species to drive them away. Mobbing behaviour is often seen in birds.

Social aspects are concerned with the formation, management and control of crowds, both from the point of view of individuals and groups. Often crowd control is designed to persuade a crowd to align with a particular view (e.g., political rallies), or to contain groups to prevent damage or mob behaviour. Politically organised crowd control is usually conducted by law enforcement but on some occasions military forces are used for particularly large or dangerous crowds.

Psychological aspects are concerned with the psychology of the crowd as a group and the psychology of those who allow their will and emotions to be informed by the crowd (both discussed more comprehensively under crowd psychology), and other individual responses to crowds, such as claustrophobia, agoraphobia and social anxiety. At a general level, crowd psychology is concerned with the behaviour and thought processes of individual crowd members and the crowd as a whole. Given the prevalence of crowd events, and the potential safety issues associated with such large gatherings of people, the topic is receiving increasing attention from agencies responsible for crowd management and also from governments.

Many studies on crowds have given insights on how crowds respond to different situations. One 2009 report highlighted many observable behaviors of crowds,[2] including evidence that crowds are able to make united decisions regarding their direction and speed of movement, even if only a few of its members have the information required to make such decisions.[2] The degree to which informed members can affect the crowd depends on their position within the group, with those in the crowd's core likely to have a greater influence.[2]

Generally, researchers in crowd psychology have focused on the negative aspects of crowds,[3] but not all crowds are volatile or negative in nature. For example, in the beginning of the socialist movement crowds were asked to put on their Sunday dress and march silently down the street. A more-modern example involves the sit-ins during the Civil Rights Movement. Crowds can reflect and challenge the held ideologies of their sociocultural environment. They can also serve integrative social functions, creating temporary communities.[4][3]

There is limited research into the types of crowd and crowd membership and there is no consensus as to the classification of types of crowds. Two recent scholars, Momboisse (1967)[5] and Berlonghi (1995)[6] focused upon purpose of existence to differentiate among crowds. Momboisse developed a system of four types: casual, conventional, expressive, and aggressive. Berlonghi classified crowds as spectator, demonstrator, or escaping, to correlate to the purpose for gathering.

Another approach to classifying crowds is sociologist Herbert Blumer's system of emotional intensity. He distinguishes four types of crowds: casual, conventional, expressive, and acting. His system is dynamic in nature, presuming that a crowd changes its level of emotional intensity over time.

Crowds can be active (mobs) or passive (audiences). Active crowds can be further divided into aggressive, escapist, acquisitive, or expressive mobs.[4] Aggressive mobs are often violent and outwardly focused. Examples are football riots and the L.A. Riots of 1992. Escapist mobs are characterized by a large number of panicked people trying to get out of a dangerous situation. Acquisitive mobs occur when large numbers of people are fighting for limited resources. An expressive mob is any other large group of people gathering for an active purpose. Civil disobedience, rock concerts, and religious revivals all fall under this category.[4]