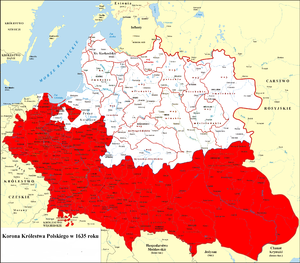 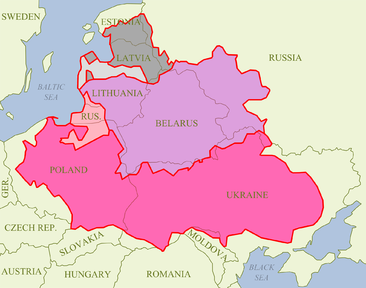 High-level administrative map of Polish-Lithuanian Commonwealth and its fiefdoms in 1619 (superimposed on present day political map of Central and Eastern Europe).
The Crown possessions of the Kingdom of Poland
Grand Duchy of Lithuania.
Duchy of Prussia (semi-independent Polish fiefdom).
Duchy of Courland and Semigallia, Lithuanian fief.
Duchy of Livonia.

The Crown of the Kingdom of Poland (Polish: Korona Królestwa Polskiego, Latin: Corona Regni Poloniae), or simply the Crown, is the common name for the historic (but unconsolidated) Late Middle Ages territorial possessions of the King of Poland, including Poland proper.

The kingdom has been traditionally dated back to c. 966, when Mieszko I and his pagan Slavic realm joined Christian Europe (Baptism of Poland), thus culminating the process of creation of the state of Poland started by his Polan Piast dynasty ancestors. His oldest son and successor, Prince Bolesław I Chrobry, Duke of Poland, became the first crowned King of Poland in 1025.

The creation of the Crown of the Kingdom of Poland was a milestone in the evolution of Polish statehood and the European identity. It represented the concept of the Polish kingdom (nation) as distinctly separate from the person of the monarch.[1] The introduction of that concept marked the transformation of the Polish government from a patrimonial monarchy (a hereditary monarchy) to a "quasi-constitutional monarchy" (monarchia stanowa,)[1] in which power resides in the nobility, clergy, and (to some extent) working class, also referred to as an "elective monarchy".

A related concept that evolved soon afterward was that of Rzeczpospolita ("Commonwealth"), which was an alternate to the Crown as a name for the Polish state after the Treaty of Lublin in 1569.[1] The Crown of the Kingdom of Poland was also related to other symbols of Poland, such as the capital (Kraków), the Polish coat of arms and the flag of Poland.[1]

The concept of the Crown also had a geographical aspects, particularly related to the indivisibility of the Polish - Crown -territory.[1] It can be also seen as a unit of administrative division, the territories under direct administration of the Polish state from the Middle Ages to the late 18th century (currently part of Poland, Ukraine and some border counties of Russia, Belarus, Moldova, Slovakia, and Romania, among others). Parts formed part at the early Kingdom of Poland, then, the Polish-Lithuanian Commonwealth until its final collapse in 1795.

At the same time, the Crown also referred to all lands that the Polish state (not the monarch) could claim to have the right to rule over, including those that were not within Polish borders.[1]

The term distinguishes those territories federated with the Crown Grand Duchy of Lithuania (     ) from various fiefdom territories (which enjoyed varying degrees of autonomy or semi-independence from the King), such as the Duchy of Prussia (     ) and the Duchy of Courland (     ).

Prior to the 1569 Union of Lublin, Crown territories may be understood as those of Poland proper, inhabited by Poles, or other areas under the sovereignty of Polish nobility. With the Union of Lublin, however, most of present-day Ukraine (which had a negligible Polish population and had until then been governed by the Lithuania), passed onto Polish administration, thus becoming Crown territory.

During that period, a term for a Pole was koroniarz (plural: koroniarze) - or Crownlander(s) in English - derived from Korona - the Crown.

Depending on context, the Polish "Crown" may also refer to "The Crown," a term used to distinguish the personal influence and private assets of the Commonwealth's current monarch from government authority and property. This often meant a distinction between persons loyal to the elected King (royalists) and persons loyal to Polish magnate (confederates). 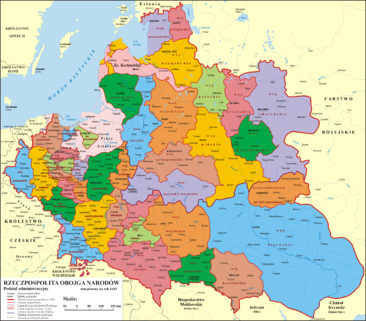 (Polish) Voivodeships of the Commonwealth of the Two Nations 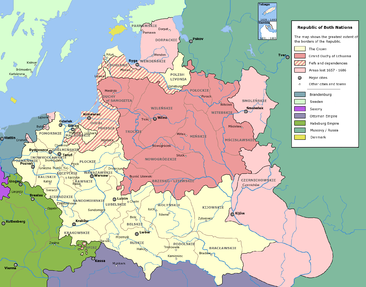 Royal Prussia (Polish: Prusy Królewskie) was a province of the Kingdom of Poland from 1466 and then of the Polish-Lithuanian Commonwealth from 1569 to 1772. Royal Prussia included Pomerelia, Chełmno Land (Kulmerland), Malbork Voivodeship (Marienburg), Gdańsk (Danzig), Toruń (Thorn), and Elbląg (Elbing). Polish historian Henryk Wisner writes that Royal Prussia belonged to the Province of Greater Poland.[2]

Other holdings or fiefs

Main article: Szepes_county § The Pawning of Szepes towns and the Province of 13 Szepes Towns

As one of the terms of the Treaty of Lubowla, the Hungarian crown exchanged, for a loan of sixty times the amount of 37,000 Prague groschen (approximately seven tonnes of pure silver), 16 rich salt-producing towns in the area of Spisz (Zips), as well as a right to incorporate them into Poland until the debt was repaid. The towns affected were: Biała, Lubica, Wierzbów, Spiska Sobota, Poprad, Straże, Spiskie Włochy, Nowa Wieś, Spiska Nowa Wieś, Ruszkinowce, Wielka, Spiskie Podgrodzie, Maciejowce, Twarożne.

Wenceslaus I sold the Duchy of Siewierz to the Archbishop of Kraków, Zbigniew Cardinal Oleśnicki, for 6,000 silver groats in 1443.[3] After that point it was considered to be associated with the Lesser Poland Province[4] and was the only ecclesiastical duchy in Lesser Poland. The junction of the duchy with the Lesser Poland Province was concluded in 1790 when the Great Sejm formally incorporated the Duchy, as part of the Crown of the Kingdom of Poland, into the Polish–Lithuanian Commonwealth.

The Prince-Bishopric of Warmia[5] (Polish: Biskupie Księstwo Warmińskie,[6]) was a semi independent ecclesiastical state, ruled by the incumbent ordinary of the Roman Catholic Archdiocese of Warmia, and a protectorate of Kingdom of Poland, later part of the Polish-Lithuanian Commonwealth after the Peace of Thorn (1466-1772)[7]

After the childless death of the last of the House of Pomerania, Bogislaw XIV in 1637, Lauenburg and Bütow Land again became a terra (land, ziemia) of the Crown of the Kingdom of Poland. In 1641 it became part of the Pomeranian Voivodeship of the Polish-Lithuanian Commonwealth. After the 1657 Treaty of Bydgoszcz, which amended the Treaty of Wehlau, it was granted to the Hohenzollern dynasty of Brandenburg-Prussia in return for her help against Sweden in the Swedish-Polish War under the same favorable conditions the House of Pomerania had enjoyed before. Lauenburg and Bütow Land was officially a Polish fiefdom until the First Partition of Poland in 1772 when King Frederick II of Prussia incorporated the territory into Prussia and the subsequent Treaty of Warsaw in 1773[8] made the former conditions obsolete.

The Duchy of Livonia was held as a condominium (joint domain) with the Grand Duchy of Lithuania.

Duchy of Courland and Semigallia

The Duchy of Courland and Semigallia was held as a condominium (joint domain) with the Grand Duchy of Lithuania.