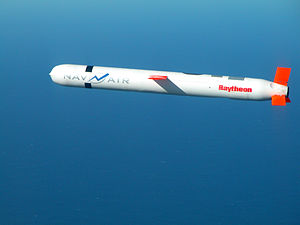 A cruise missile is a guided missile used against terrestrial targets, so called because the major portion of its flight path is conducted at cruise speed (i.e., approximately constant velocity). Cruise missiles are designed to deliver a large warhead over long distances with high accuracy (i.e. small circular error probability). The dynamics of cruise are a result of aerodynamic lift (force), and the equality of the thrust or propulsion forces against aerodynamic drag and as a result there is no acceleration. Modern cruise missiles are capable of travelling at supersonic or high subsonic speeds, are self-navigating, and are able to fly on a non-ballistic, extremely low-altitude trajectory. They are distinct from unmanned aerial vehicles (UAV) in several ways: the cruise missile is a single use weapon which is always sacrificed in the mission; it is not intended to provide aerial reconnaissance; and the warhead is integrated directly into the hull of the vehicle and cannot be separated.

The first cruise missiles to be deployed were the Nazi German V-1 of World War II. Advances in transistor and computer technology have contributed to self-correcting avionic and aeronautical designs that allow missiles to be guided in flight, as opposed to only at launch. These advances developed into guided missiles and guided bombs, and later into the modern cruise missile.

The idea of an "aerial torpedo" was shown in the British 1909 film The Airship Destroyer, where flying torpedoes controlled wirelessly are used to bring down airships bombing London.[1]

In 1916, Lawrence Sperry built and patented an "aerial torpedo", a small biplane carrying a TNT charge, a Sperry autopilot and a barometric altitude control. Inspired by these experiments, the US Army developed a similar flying bomb called the Kettering Bug. Germany had also flown trials with remote-controlled aerial gliders (Torpedogleiter) built by Siemens-Schuckert beginning in 1916.[2]

In the period between the World Wars the United Kingdom developed the Larynx (Long Range Gun with Lynx Engine) which underwent a few flight tests in the 1920s.[3]

Germany first deployed cruise style missiles, during World War II. The V-1, often referred to as flying bomb, contained a gyroscope guidance system and was propelled by a simple pulse-jet engine, the sound of which gave it the nickname of "buzz bomb" or "doodlebug". Accuracy was sufficient only for use against very large targets (the general area of a city), while the range of 250 km was significantly lower than that of a bomber carrying the same payload. The main advantages were speed (while not sufficient to outperform contemporary interceptors) and expendability. The production cost of a V-1 was only a small fraction of that of a V-2 supersonic ballistic missile, carrying a similar-sized warhead. Unlike the V-2, however, the initial deployments of the V-1 required stationary launch ramps which were susceptible to bombardment. Nazi Germany, in 1943, also developed the Mistel composite aircraft program which can be seen as a rudimentary air-launched cruise missile, where a piloted fighter-type aircraft was mounted atop an unpiloted bomber-sized aircraft that was packed with explosives to be released while approaching the target. Bomber-launched variants of the V-1 saw limited operational service towards the end of the war.

Immediately after the war the United States Air Force had 21 different guided missile projects including would-be cruise missiles. All were cancelled by 1948 except four: the Air Material Command BANSHEE, the SM-62 Snark, the SM-64 Navaho, and the MGM-1 Matador. The BANSHEE design was similar to Operation Aphrodite; like Aphrodite it failed, and was canceled in April 1949.[5]

During the Cold War period both the United States and the Soviet Union experimented further with the concept, deploying early cruise missiles from land, submarines and aircraft. The main outcome of the US Navy submarine missile project was the SSM-N-8 Regulus missile, based upon the V-1.

The US Air Force's first operational surface-to-surface missile was the winged, mobile, nuclear-capable MGM-1 Matador, also similar in concept to the V-1. Deployment overseas began in 1954, first to West Germany and later to the Republic of China (Taiwan) and South Korea. On November 7, 1956, U.S. Air Force Matador units in West Germany, whose missiles were capable of striking targets in the Warsaw Pact, deployed from their fixed day-to-day sites to unannounced dispersed launch locations. This alert was in response to the crisis posed by the Soviet attack on Hungary which suppressed the 1956 Hungarian Revolution.

Between 1957 and 1961 the United States followed an ambitious and well-funded program to develop a nuclear-powered cruise missile, Supersonic Low Altitude Missile. It was designed to fly below the enemy's radar at speeds above Mach 3 and carry a number of hydrogen bombs that it would drop on its path over enemy territory. Although the concept was proven sound and the 500 megawatt engine finished a successful test run in 1961, no airworthy device was ever completed. The project was finally abandoned in favor of ICBM development.

While ballistic missiles were the preferred weapons for land targets, heavy nuclear and conventional weapon tipped cruise missiles were seen by the USSR as a primary weapon to destroy US naval carrier battle groups. Large submarines (for example, Echo and Oscar classes) were developed to carry these weapons and shadow US battle groups at sea, and large bombers (for example, Backfire, Bear, and Blackjack models) were equipped with the weapons in their air-launched cruise missile (ALCM) configuration.

Cruise missiles generally consist of a guidance system, payload, and aircraft propulsion system, housed in an airframe with small wings and empennage for flight control. Payloads usually consist of a conventional warhead or a nuclear warhead. Cruise missiles tend to be propelled by a jet engine, turbofan engines being preferred due to their greater efficiency at low altitude and subsonic speed.

Cruise missiles can be categorized by size, speed (subsonic or supersonic), and range, and whether launched from land, air, surface ship, or submarine. Often versions of the same missile are produced for different launch platforms; sometimes air- and submarine-launched versions are a little lighter and smaller than land- and ship-launched versions.

Guidance systems can vary across missiles. Some missiles can be fitted with any of a variety of navigation systems (Inertial navigation, TERCOM, or satellite navigation). Larger cruise missiles can carry either a conventional or a nuclear warhead, while smaller ones carry only conventional warheads.

A Hypersonic speed cruise missile would travel at least 5 times the speed of sound (Mach 5). 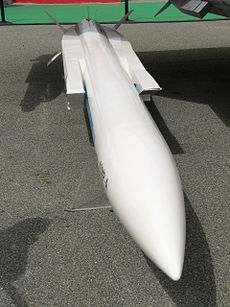 These missiles travel faster than the speed of sound, usually using ramjet engines. The range is typically 100–500 km, but can be greater. Guidance systems vary.

The US, Russia, UK, Israel, South Korea, Turkey, Greece, Iran, China and India have developed several long-range subsonic cruise missiles. These missiles have a range of over 1,000 kilometres (620 mi) and fly at about 800 kilometres per hour (500 mph).[citation needed] They typically have a launch weight of about 1,500 kilograms (3,300 lb)[citation needed] and can carry either a conventional or a nuclear warhead. Earlier versions of these missiles used inertial navigation; later versions use much more accurate TERCOM and DSMAC systems. Most recent versions can use satellite navigation. 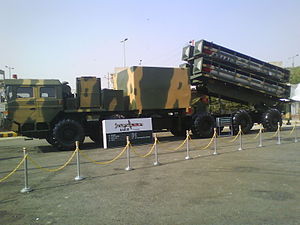 These missiles are about the same size and weight and fly at similar speeds to the above category, but the range is (officially)[citation needed] less than 1,000 km. Guidance systems vary.

A Naval Strike Missile of the Norwegian Navy 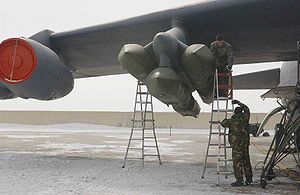 (As of 2001) the BGM-109 Tomahawk missile model has become a significant part of the US naval arsenal. It gives ships and submarines an extremely accurate, long-range, conventional land attack weapon. Each costs about US$830,000.[19] Both the Tomahawk and the AGM-86 were used extensively during Operation Desert Storm.

The US Air Force deploys an air-launched cruise missile, the AGM-86 ALCM. The B-52 Stratofortress is the exclusive delivery vehicle for the AGM-86 and AGM-129 ACM. Both missile types are configurable for either conventional or nuclear warheads.

Both Tomahawk (as BGM-109) and ALCM (AGM-86) were competing designs for the USAF. ALCM nuclear tipped cruise missile to be carried by the B-52 heavy bomber.[citation needed] 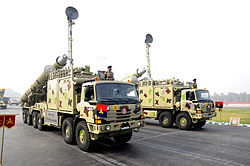 The USAF adopted the AGM-86 for its bomber fleet while AGM-109 was adapted to launch from trucks and ships and adopted by the USAF and Navy. The truck-launched versions, and also the Pershing II and SS-20 Intermediate Range Ballistic Missiles, were later destroyed under the bilateral INF (Intermediate Range Nuclear Forces) treaty with the USSR.

The British Royal Navy (RN) also operates cruise missiles, specifically the US-made Tomahawk, used by the RN's nuclear submarine fleet. UK conventional warhead versions were first fired in combat by the RN in 1999, during the Kosovo War (the US fired cruise missiles in 1991). The Royal Air Force uses the Storm Shadow cruise missile on its Tornado GR4 aircraft. It is also used by France, where it is known as SCALP EG, and carried by the Armée de l'Air's Mirage 2000 and Rafale aircraft.

India and Russia have jointly developed the supersonic cruise missile BrahMos. There are three versions of the Brahmos: ship/land-launched, air-launched and sub-launched. The ship/land-launched version were operational as of late 2007. The Brahmos has the capability to attack targets on land. Russia also continues to operate other cruise missiles: the SS-N-12 Sandbox, SS-N-19 Shipwreck, SS-N-22 Sunburn and SS-N-25 Switchblade. Germany and Spain operate the Taurus missile while Pakistan has developed its own cruise missile somewhat similar to Tomahawk cruise missile, named the Babur missile. Both the People's Republic of China and the Republic of China (Taiwan) have designed several cruise missile variants, such as the well-known C-802, some of which are capable of carrying biological, chemical, nuclear, and conventional warheads.

The French Force de Frappe nuclear forces include both land and sea based bombers with Air-Sol Moyenne Portée high speed medium range nuclear cruise missiles. Two models are in use, ASMP and a newer ASMP-A. Approximately 60 nuclear missiles are in service, 50 land based and 10 sea based.[citation needed]

In 2014, India successfully tested nuclear-capable long-range subsonic cruise missile Nirbhay.[20] The missile was developed by India's Aeronautical Development Establishment (ADE), has a range of more than 1,000 km (620 mi) and is expected to enter mass-production for the Indian Armed Forces by 2016.[21]

Russia has Kh-55SM cruise missiles, with similar to US AGM-129 range of 3000 km, but are able to carry more powerful warhead of 200 kt. They are equipped with a TERCOM system which allows them to cruise at an altitude lower than 110 meters at subsonic speeds while obtaining a CEP accuracy of 15 meters with an Inertial navigation system. They are air-launched from either Tupolev Tu-95s, Tupolev Tu-22Ms, or Tupolev Tu-160s, each able to carry 16 for the Tu-95, 12 for the Tu-160, and 4 for the Tu-22M. A stealth version of the missile, the Kh-101 is in development. It has similar qualities as the Kh-55, except that its range has been extended to 5,000 km, equipped with a 1,000 kg conventional warhead, and has stealth features which reduces its probability of intercept.[22] 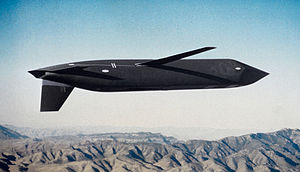 An AGM-129 ACM of the United States Air Force

The United States has deployed four nuclear cruise missiles at one time or another.

Currently cruise missiles are among the most expensive of single-use weapons, up to several million dollars apiece. One consequence of this is that its users face difficult choices in target allocation, to avoid expending the missiles on targets of low value. For instance during Operation Enduring Freedom the United States attacked targets of very low monetary value with cruise missiles, which led many to question the efficiency of the weapon. However, proponents of the cruise missile counter that the same argument applies to other types of UAVs: they are cheaper than human pilots when total training and infrastructure costs are taken into account, not to mention the risk of loss of personnel. As demonstrated in Operation Odyssey Dawn and prior conflicts, cruise missiles are much more difficult to detect and intercept than other aerial assets (reduced radar cross-section, infrared and visual signature due to smaller size), suiting them to attacks against static air defense systems.