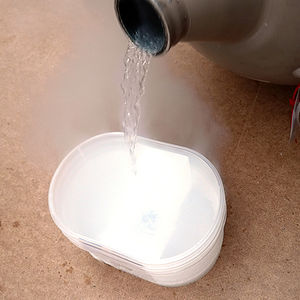 In physics, cryogenics is the study of the production and behaviour of materials at very low temperatures.

It is not well-defined at what point on the temperature scale refrigeration ends and cryogenics begins, but scientists[1] assume it starts at or below −150 °C (123 K; −238 °F). The National Institute of Standards and Technology has chosen to consider the field of cryogenics as that involving temperatures below −180 °C or −292.00 °F or 93.15 K. This is a logical dividing line, since the normal boiling points of the so-called permanent gases (such as helium, hydrogen, neon, nitrogen, oxygen, and normal air) lie below −180 °C while the Freon refrigerants, hydrogen sulfide, and other common refrigerants have boiling points above −180 °C. (above −150 °C, −238 °F or 123 K).

A person who studies elements that have been subjected to extremely cold temperatures is called a cryogenicist.

Cryogenicists use the Kelvin or Rankine temperature scales.

Cryogenics
The branches of physics and engineering that involve the study of very low temperatures, how to produce them, and how materials behave at those temperatures.

Cryobiology
The branch of biology involving the study of the effects of low temperatures on organisms (most often for the purpose of achieving cryopreservation).

Cryoelectronics
The field of research regarding superconductivity at low temperatures.

Cryotronics
The practical application of cryoelectronics.

Cryonics
Cryopreserving humans and animals with the intention of future revival. "Cryogenics" is sometimes erroneously used to mean "Cryonics" in popular culture and the press.[2]

The word cryogenics stems from Greek kρύο (cryo) – "cold" + genic – "having to do with production".

These liquids may be stored in Dewar flasks, which are double-walled containers with a high vacuum between the walls to reduce heat transfer into the liquid. Typical laboratory Dewar flasks are spherical, made of glass and protected in a metal outer container. Dewar flasks for extremely cold liquids such as liquid helium have another double-walled container filled with liquid nitrogen. Dewar flasks are named after their inventor, James Dewar, the man who first liquefied hydrogen. Thermos bottles are smaller vacuum flasks fitted in a protective casing.

Cryogenic barcode labels are used to mark dewar flasks containing these liquids, and will not frost over down to -195 degrees Celsius.[3]

Cryogenic transfer pumps are the pumps used on LNG piers to transfer liquefied natural gas from LNG carriers to LNG storage tanks, as are cryogenic valves.

The field of cryogenics advanced during World War II when scientists found that metals frozen to low temperatures showed more resistance to wear. Based on this theory of cryogenic hardening, the commercial cryogenic processing industry was founded in 1966 by Ed Busch. With a background in the heat treating industry, Busch founded a company in Detroit called CryoTech in 1966 which merged with 300 Below in 1999 to become the world's largest and oldest commercial cryogenic processing company.[citation needed] Busch originally experimented with the possibility of increasing the life of metal tools to anywhere between 200%-400% of the original life expectancy using cryogenic tempering instead of heat treating[citation needed]. This evolved in the late 1990s into the treatment of other parts.

Cryogens, such as liquid nitrogen, are further used for specialty chilling and freezing applications. Some chemical reactions, like those used to produce the active ingredients for the popular statin drugs, must occur at low temperatures of approximately −100 °C (−148 °F). Special cryogenic chemical reactors are used to remove reaction heat and provide a low temperature environment. The freezing of foods and biotechnology products, like vaccines, requires nitrogen in blast freezing or immersion freezing systems. Certain soft or elastic materials become hard and brittle at very low temperatures, which makes cryogenic milling (cryomilling) an option for some materials that cannot easily be milled at higher temperatures.

Cryogenic processing is not a substitute for heat treatment, but rather an extension of the heating - quenching - tempering cycle. Normally, when an item is quenched, the final temperature is ambient. The only reason for this is that most heat treaters do not have cooling equipment. There is nothing metallurgically significant about ambient temperature. The cryogenic process continues this action from ambient temperature down to −320 °F (140 °R; 78 K; −196 °C). In most instances the cryogenic cycle is followed by a heat tempering procedure. As all alloys do not have the same chemical constituents, the tempering procedure varies according to the material's chemical composition, thermal history and/or a tool's particular service application.

Another use of cryogenics is cryogenic fuels for rockets with liquid hydrogen as the most widely used example. Liquid oxygen (LOX) is even more widely used but as an oxidizer, not a fuel. NASA's workhorse space shuttle used cryogenic hydrogen/oxygen propellant as its primary means of getting into orbit. LOX is also widely used with RP-1 kerosene, a non-cryogenic hydrocarbon, such as in the rockets built for the Soviet space program by Sergei Korolev.

Russian aircraft manufacturer Tupolev developed a version of its popular design Tu-154 with a cryogenic fuel system, known as the Tu-155. The plane uses a fuel referred to as liquefied natural gas or LNG, and made its first flight in 1989. 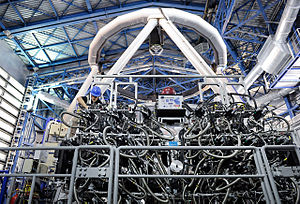 Some applications of cryogenics:

Cryogenic cooling of devices and material is usually achieved via the use of liquid nitrogen, liquid helium, or a mechanical cryocooler (which uses high pressure helium lines). Gifford McMahon Cryocoolers, pulse tube cryocoolers and Stirling cryocoolers are in wide use with selection based on required base temperature and cooling capacity. The most recent development in cryogenics is the use of magnets as regenerators as well as refrigerators. These devices work on the principle known as the magnetocaloric effect.