From Infogalactic: the planetary knowledge core
Jump to: navigation, search
For the study of the production of very low temperatures, see Cryogenics. For the low-temperature preservation of living tissue and organisms in general, see Cryopreservation. For the Hot Cross album, see Cryonics (album). 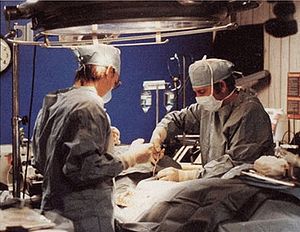 Cryonics (from Greek κρύος 'kryos-' meaning 'cold') is the low-temperature preservation of animals and humans who cannot be sustained by contemporary medicine, with the hope that healing and resuscitation may be possible in the future.[1]

Cryopreservation of people or large animals is not reversible with current technology. The stated rationale for cryonics is that people who are considered dead by current legal or medical definitions may not necessarily be dead according to the more stringent information-theoretic definition of death.[2] It is proposed that cryopreserved people might someday be recovered by using highly advanced technology.[3]

Some scientific literature supports the feasibility of cryonics.[3][4] An open letter supporting the idea of cryonics has been signed by 63 scientists, including Aubrey de Grey and Marvin Minsky.[5] In 2015, a group of scientists from Liverpool, Cambridge and Oxford, established the UK Cryonics and Cryopreservation Research Network to advance and promote research into cryobiology and its applications, including cryonics.[6][7] However, many other scientists regard cryonics with skepticism.[8] As of 2014, the majority of members of the cryonics organizations are men, but the majority of those who have undergone cryopreservation procedures are women.[9]

Cryonics procedures ideally begin within minutes of cardiac arrest, and use cryoprotectants to prevent ice formation during cryopreservation.[10] There are presently three cryonics service providers: Alcor and Cryonics Institute based in the US, and KrioRus in Russia.

A central premise of cryonics is that long-term memory, personality, and identity are stored in durable cell structures and patterns within the brain that do not require continuous brain activity to survive.[11] This premise is generally accepted in medicine; it is known that under certain conditions the brain can stop functioning and still later recover with retention of long-term memory.[12] Brain structures encoding personality and long-term memory persist for some time after legal death, these structures are preserved by cryopreservation, and future technologies that could restore encoded memories to functional expression in a healed person are theoretically possible. At present, only cells, tissues, and some small organs can be reversibly cryopreserved.[13][14]

A moral premise of cryonics is that all terminally ill patients should have the right, if they so choose, to be cryopreserved.[15]

Long-term cryopreservation can be achieved by cooling to near 77.15 Kelvin (approximately -196.01°C), the boiling point of liquid nitrogen. It is a common mistaken belief that cells will lyse (burst) due to the formation of ice crystals within the cell, since this only occurs if the freezing rate exceeds the osmotic loss of water to the extracellular space.[16] However, damage from freezing can still be serious; ice may still form between cells, causing mechanical and chemical damage. The difficulties of recovering complex organisms from a frozen state have been long known. Attempts to recover large frozen mammals by simply rewarming were abandoned by 1957.[17]

When used at high concentrations, cryoprotectants stop ice formation completely. Cooling and solidification without crystal formation is called vitrification.[18] The first cryoprotectant solutions able to vitrify at very slow cooling rates while still being compatible with tissue survival were developed in the late 1990s by cryobiologists Gregory Fahy and Brian Wowk for the purpose of banking transplantable organs.[19][20] This has allowed animal brains to be vitrified, warmed back up, and examined for ice damage using light and electron microscopy. No ice crystal damage was found.[21]

Those who believe that revival may someday be possible generally look toward advanced bioengineering, molecular nanotechnology,[22] or nanomedicine[23] as key technologies. Revival would require repairing damage from lack of oxygen, cryoprotectant toxicity, thermal stress (fracturing), freezing in tissues that do not successfully vitrify, and reversing the effects that caused the patient's death. In many cases extensive tissue regeneration would be necessary.

Legally, cryonics patients are treated as deceased persons.[25][26] Cryonics providers tend to be treated as medical research institutes. In France, cryonics is not considered a legal mode of body disposal;[27] only burial, cremation, and formal donation to science are allowed. However, bodies may legally be shipped to other, less restrictive countries for cryonic freezing.[28]

Cryonics views legal death as a perhaps sometimes pragmatically useful but fundamentally flawed and usually incorrect diagnosis which has no theoretical or philosophical justification. "Legal death" is usually just another name for a set of symptoms that have proven resistant to treatment by contemporary medicine. If death is not an event that happens suddenly when the heart stops (and "legal death" is often pronounced) this raises philosophical questions about what exactly death is. In 2005 an ethics debate in the medical journal, Critical Care, noted “…few if any patients pronounced dead by today’s physicians are in fact truly dead by any scientifically rigorous criteria.”[29] Ethical and theological opinions of cryonics tend to pivot on the issue of whether cryonics is regarded as interment or medicine. Many followers of Nikolai Fyodorovich Fyodorov, a Russian Orthodox Christian philosopher, see cryonics as an important step in the Common Cause project which he originated.[30]

In 1969, a Roman Catholic priest consecrated the cryonics capsule of Ann DeBlasio, one of the first cryonics patients.[31]

At the request of the American Cryonics Society, in 1995, philosopher Charles Tandy, [32] authored a paper entitled “Cryonic-Hibernation in Light of the Bioethical Principles of Beauchamp and Childress.” Tandy considered the four bioethical factors or principles articulated by philosophers Beauchamp and Childress as they apply to cryonics. These four principles are 1) respect for autonomy; 2) nonmaleficence; 3) beneficence; and 4) justice. Tandy concluded that in respect to all four principles “biomedical professionals have a strong (not weak) and actual (not prima facie, but binding) obligation to help insure cryonic-hibernation of the cryonics patient.”[33]

In 1922 Alexander Yaroslavsky, member of Russian immortalists-biocosmists movement, wrote "Anabiosys Poem". However, the modern era of cryonics began in 1962 when Michigan college physics teacher Robert Ettinger proposed in a privately published book, The Prospect of Immortality,[34] that freezing people may be a way to reach future medical technology. (The book was republished in 2005 and remains in print.) Even though freezing a person is apparently fatal, Ettinger argued that what appears to be fatal today may be reversible in the future. He applied the same argument to the process of dying itself, saying that the early stages of clinical death may be reversible in the future. Combining these two ideas, he suggested that freezing recently deceased people may be a way to save lives. In 1955 James Lovelock was able to reanimate rats frozen at 0 Celsius using microwave diathermy.[35]

Slightly before Ettinger’s book was complete, Evan Cooper[36] (writing as Nathan Duhring) privately published a book called Immortality: Physically, Scientifically, Now that independently suggested the same idea. Cooper founded the Life Extension Society (LES) in 1964 to promote freezing people. Ettinger came to be credited as the originator of cryonics, perhaps because his book was republished by Doubleday in 1964 on recommendation of Isaac Asimov and Fred Pohl, and received more publicity. Ettinger also stayed with the movement longer.

In 2015 Du Hong, a 61-year-old female writer of children's literature, became the first known Chinese person to be cryopreserved.[37]

DARPA currently funds several research projects aimed on sending the human body into a state of suspended animation, essentially “shutting down” the heart and brain until proper care can be administered that can be regarded as a step to cryopreservation of humans.[38]

Famous people who were cryopreserved

Famous people associated with cryonics but who were not cryopreserved

The urban legend suggesting Walt Disney was cryopreserved is false; he was cremated and interred at Forest Lawn Memorial Park Cemetery.[43][44] Robert A. Heinlein, who wrote enthusiastically of the concept in The Door into Summer (serialized in 1956), was cremated and had his ashes distributed over the Pacific Ocean. Timothy Leary was a long-time cryonics advocate and signed up with a major cryonics provider, but he changed his mind shortly before his death and was not cryopreserved.