The armed forces has long been the most powerful institution in Cuba and high-ranking generals are believed to play crucial roles in all conceivable succession scenarios.[2] The military controls 60 percent of the economy through the management of hundreds of enterprises in key economic sectors.[3][4] The military is also Raúl Castro's base.[4] In numerous speeches, Raúl Castro has emphasized the military's role as a people's partner.[5]

From 1966 until the late 1980s, Soviet Government military assistance enabled Cuba to upgrade its military capabilities to number one in Latin America and project power abroad. The first Cuban military mission in Africa was established in Ghana in 1961. Cuba's military forces appeared in Algeria, in 1963, when a military medical brigade came over from Havana to support the regime.[6] Since the 1960s, Cuba sent military forces to African and Arab countries; Syria in 1973, Ethiopia in 1978, the Cuban intervention in Angola from 1975 to 1989, and Nicaragua and El Salvador during the 1980s.

The Soviet Union gave both military and financial aid to the Cubans. The tonnage of Soviet military deliveries to Cuba throughout most of the 1980s exceeded deliveries in any year since the military build-up during the 1962 Cuban Missile Crisis.

Cuban military power has been sharply reduced by the loss of Soviet subsidies. Today, the Revolutionary Armed Forces number 39,000 regular troops.[1] The DIA reported in 1998 that the country's paramilitary organizations, the Territorial Militia Troops, the Youth Labor Army, and the Naval Militia had suffered considerable morale and training degradation over the previous seven years but still retained the potential to "make an enemy invasion costly."[7] Cuba also adopted a "war of the people" strategy that highlights the defensive nature of its capabilities.

On September 14, 2012, a Cuban senior general agreed to further deepen military cooperation with China during a visit to Beijing. He said that Cuba was willing to enhance exchanges with the Chinese military and strengthen bilateral cooperation in personnel training and other areas.[8]

In 1984, according to Jane's Military Review, there were three major geographical commands, Western, Central, and Eastern. There were a reported 130,000 all ranks, and each command was garrisoned by an army comprising a single armoured division, a mechanised division, and a corps of three infantry divisions, though the Eastern Command had two corps totalling six divisions.

A U.S. Defense Intelligence Agency assessment in the first half of 1998 said that the army's armour and artillery units were at low readiness levels due to 'severely reduced' training, generally incapable of mounting effective operations above the battalion level, and that equipment was mostly in storage and unavailable at short notice.[9] The same report said that Cuban special operations forces continue to train but on a smaller scale than beforehand, and that while the lack of replacement parts for its existing equipment and the current severe shortage of fuel were increasingly affecting operational capabilities, Cuba remained able to offer considerable resistance to any regional power.[10]

In 1999 the Revolutionary Army (Ejercito Revolucionario) represented approximately 70 percent of Cuba's regular military manpower. According to the IISS, the army's estimated 45,000 troops included 39,000 members of the Ready Reserves who were completing the forty-five days of annual active-duty service necessary for maintaining their status, as well as conscripts who were fulfilling their military service requirement.[11]

In 1996, according to Jane's Information Group, the army was organized into three Territorial Military Commands with three Armies, one army for each command.[12] At the time, there were an estimated 38,000 army personnel.[13] 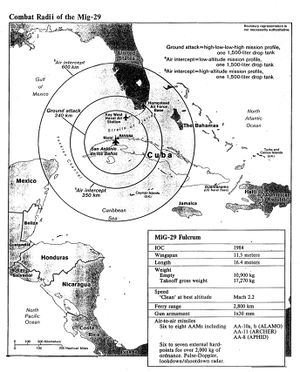 The Cuban Revolutionary Air and Air Defense Force (Spanish: Defensa Anti-Aérea Y Fuerza Aérea Revolucionaria) commonly abbreviated to DAAFAR in both Spanish and English, is the air force of Cuba.

In the 1980s, Cuba with the help of the Soviet Union was able to project power abroad, using its air force, especially in Africa. During that time Cuba sent jet fighters and transports for deployment in conflict zones such as Angola and Ethiopia.

In 1990, Cuba's Air Force was the best equipped in Latin America. In all, the modern Cuban Air Force imported approximately 230 fixed-wing aircraft. Although there is no exact figure available, Western analysts estimate that at least 130 (with only 25 operational[17]) of these planes are still in service spread out among the thirteen military airbases on the island.

In 1996, fighters from the DAAFAR shot down two Cessna aircraft based in Florida which were incorrectly suspected of dropping leaflets into Cuban airspace. The air force was criticised for not giving the pilots of the aircraft options other than being shot down. One aircraft escaped.[18]

In 1998, according to the same DIA report mentioned above, the air force had 'fewer than 24 operational MIG fighters; pilot training barely adequate to maintain proficiency; a declining number of fighter sorties, surface-to-air missiles and air-defense artillery to respond to attacking air forces.[19]

By 2007 the International Institute for Strategic Studies assessed the force as 8,000 strong with 41 combat capable aircraft and a further 188 stored. DAAFAR is known now to have integrated another Mig-29 and a few MiG-23s which makes it 58 combat aircraft in active service which are listed as 6 MiG-29s, 40 MiG-23s, and 12 MiG-21s. There were also assessed to be 12 operational transport aircraft plus trainers which include 8 L-39C and helicopters which are mainly Mil Mi-8, Mil Mi-17 and Mil Mi-24 Hind. Raúl Castro ordered in 2010 that all MiG-29 pilots had to have full training, they now have from 200–250 hours of flight annually together with real dogfight training and exercises. Up to 20 MiG-23 units also have this kind of training but the other 16 MiG-23 units spend more time in simulators than real flight. MiG-21 units have limited time in this exercises and spend more time in simulators and maintain their skills flying with the commercial brand of the air force Aerogaviota. 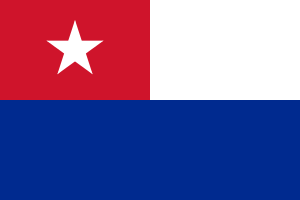 By 2007, the Cuban Navy was assessed as being 3,000 strong (including up to 550+ Navy Infantry) by the IISS with six Osa-II and one Pauk class corvette.

Almost all of the ships of the Cuban Navy have been decommissioned, and the three Koni class frigates were either expended as targets or sunk to build reefs. Cuba has constructed rolling platforms with Soviet P-15 Termit (CSS-C-3 "Seersucker") missile batteries taken from its warships and placed them near beaches where hostile amphibious assaults may occur. Most patrol boats are non-operational due to lack of fuel and spares.

The Cuban Navy also includes a small marine battalion called the Desembarco de Granma. It once numbered 550 men though its present size is not known.

There are reports of new naval projects under the Raúl Castro government. After the old Soviet submarines were put out of service, Cuba searched for help from North Korea's experience in midget submarines. North Korean defectors claimed to have seen Cubans in mid to late 1990s into a secret submarine base and appeared in public view years later a single picture of a small black native submarine in Havana harbour. It is rumored to be called 'Delfin' and is to be armed with two torpedoes. Further analysis confirmed it to be a derived from the North Korean Yugo class submarine and up to 6 units are rumoured to be in service, even if 2 of them are used for civilian meteorologic studies.

The Cuban Navy rebuilt one, large ex-Spanish fishing boat. The BPH-390 Rio Damuji is now armed with 2 C-201W missiles, 1 x 2-57mm guns, 2 x 2-25mm guns and 1 x14.5mm machine gun. This vessel is larger than the Koni class, and it is used as a helicopter carrier patrol vessel. A second unit (n°392) is under construction at Cienfuegos and is expected to enter into service as a military ship also.[21]