In the time before European settlement, the area that today includes Cullman was originally in the territory of the Cherokee Nation. The region was traversed by a trail known as the Black Warrior's Path, which led from the Tennessee River near the present location of Florence, Alabama, to a point on the Black Warrior River south of Cullman. This trail figured significantly in Cherokee history, and it featured prominently in the American Indian Wars prior to the establishment of the state of Alabama and the relocation of several American Indian tribes, including the Creek people westward along the Trail of Tears. During the Creek War in 1813, General Andrew Jackson of the U.S. Army dispatched a contingent of troops down the trail, one of which included the frontiersman Davy Crockett.[3]

During the Civil War, the future location of Cullman was the site of the minor Battle of Day's Gap. On April 30, 1863, Union forces under the command of Colonel Abel Streight won a victory over forces under Confederate General Nathan Bedford Forrest. This battle was part of a campaign and chase known collectively as Streight's Raid. Although Streight got the upper hand in this battle, Forrest would have the last laugh. In one of the more humorous moments of the war, Streight sought a truce and negotiations with Forrest in present-day Cherokee County near present-day Gaylesville. Although Streight's force was larger than Forrest's, while the two were negotiating, Forrest had his troops march repeatedly in a circuitous route past the site of the talks. Thinking himself to be badly outnumbered, Streight surrendered to Forrest on the spot.[4] 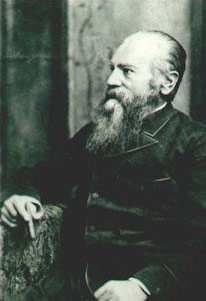 Cullman itself was founded in 1873 by Colonel John G. Cullmann, a German refugee who had arrived in America in 1865. (The city's name was Americanized to "Cullman", although some sources state that Cullmann had earlier Americanized his name from "Kullmann". Stanley Johnson, his only surviving American descendant, told The Cullman Times in 1998 that there are no German records indicating the name "Kullmann", and that "Cullmann" had always been the correct spelling.)[5] Cullmann had been an advocate of democratic reforms in his native Bavaria, and he fled when the autocratic Prussian-dominated regime emerged ascendant after the Revolutions of 1848. In 1873, Cullmann negotiated an agreement to act as agent for a tract of land 349,000 acres (1,410 km2) in size, owned by the Louisville and Nashville Railroad Company, on which he established a colony for German immigrants.[6][7]

Five German families moved to the area in March 1873; in 1874, the town was incorporated and named after Colonel Cullmann. Over the next twenty years, Cullmann encouraged around 100,000 Germans to immigrate to the United States, with many settling in the Cullman area. Cullmann drew on his military engineering training in laying out and planning the town. During this period, Cullman underwent considerable growth. German continued to be widely spoken, and Cullmann himself was the publisher of a German-language newspaper. When Cullmann died in 1895, at the age of 72, his funeral was marked by the attendance of Governor William C. Oates.[6] The site Cullmann selected for his headquarters is now his gravesite.

German immigrants also founded St Bernard's Monastery, on the grounds of which is the Ave Maria Grotto, containing 125 miniature reproductions of some of the most famous religious structures of the world. It's Cullman's principal tourist attraction.[8]

During the twentieth century, Cullman developed a more diverse economy, including several manufacturing and distribution facilities. However, its economy remains primarily based on agriculture and providing services to the agricultural workforce. Cullman County has the highest agricultural production in the state, and is one of the sixty largest agricultural-production counties in dollar terms in the United States.[10]

Cullman gained national attention in early 2008, when a special election was held to fill a vacancy in the Alabama House of Representatives. Although Cullman is known throughout the region as a former sundown town, the district that included Cullman elected James C. Fields, an African-American, in that special election.[11]

Cullman's German heritage was repressed during World War I and World War II, while the United States was fighting Germany. This was reversed in the 1970s, with renewed interest in the city's history and heritage. Today, Cullman holds an annual Oktoberfest.[12] An honorary "Bürgermeister" is elected for each Oktoberfest. For many years the Oktoberfest did not include alcohol because Cullman was dry, but starting in 2011 the Oktoberfest was able to offer beer.[13] 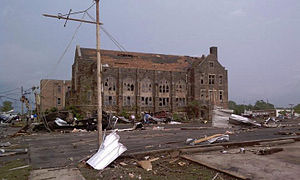 Downtown was significantly damaged by an EF4 tornado during the April 2011 tornado outbreak. Hitting on April 27, it destroyed many buildings in downtown and in an east-side residential area, but causing no fatalities. The twister moved northeast towards Arab and Guntersville, killing two Cullman County residents and four or more others.[14]

Cullman is located on top of the Brindley Mountain plateau at Lua error in Module:Coordinates at line 668: callParserFunction: function "#coordinates" was not found. (34.177508, −86.844996).[15] This is a close offshoot of the long geographic ridge called Sand Mountain, a southmost extension of the Appalachian Mountains. The elevation is 826 feet (252 m), close to the watershed between the Tennessee River and the Black Warrior River. Cullman provides its own town water supply from a city-owned lake within the city limits, Lake Catoma.[citation needed]

Other schools in Cullman include:

Cullman was ranked among Bloomberg Businessweek's 50 Best Places to Raise Your Kids in 2012[20] based on the city's educational and economic factors, crime level, air quality, amenities, and ethnic diversity.

Cullman is in the TV broadcasting areas of Birmingham and Huntsville, Alabama.

There are two low-power broadcasting stations in Cullman: WCQT-LP TV-27 and CATV-2. Cullman also has a PEG station, CCTV55, which is run by students at Cullman High School. CCTV55 was known as CATS-55 at one time.

The climate in this area is characterized by hot, humid summers and generally mild to cool winters. According to the Köppen Climate Classification system, Cullman has a humid subtropical climate, abbreviated "Cfa" on climate maps.[22]