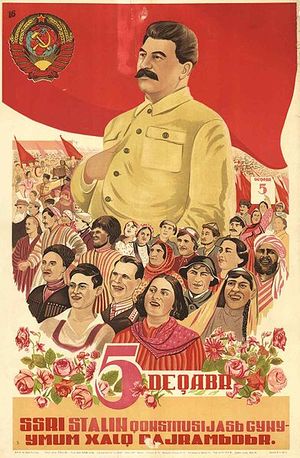 A cult of personality arises when a regime uses mass media, propaganda, or other methods such as government-organized demonstrations to create an idealized, heroic, and at times worshipful image of a leader, often through unquestioning flattery and praise. A cult of personality is similar to divinization, except that it is established by mass media and propaganda usually by the state, especially in totalitarian (or sometimes authoritarian) states. The term was developed by Nikita Khrushchev's initially secret speech On the Cult of Personality and Its Consequences given on the final day of the 20th Congress of the Communist Party of the Soviet Union, February 25, 1956, which criticized the lionization of Josef Stalin (and by implication his Communist contemporaries - Mao Zedong and Kim Il-Sung) for being contrary to original Marxist doctrine.

The term "cult of personality" probably appeared in English around 1800–1850, along with the French and German use.[1] At first it had no political connotations but was instead closely related to the Romantic "cult of genius".[1] The political use of the phrase came first in a letter from Karl Marx to German political worker, Wilhelm Blos, 10 November 1877:[1]

Neither of us cares a straw of popularity. Let me cite one proof of this: such was my aversion to the personality cult [orig. Personenkultus] that at the time of the International, when plagued by numerous moves [...] to accord me public honor, I never allowed one of these to enter the domain of publicity [...][1][2] 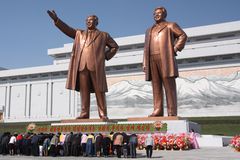 There are various views about what constitutes a cult of personality in a political leader. In his Ph.D. dissertation, The ABC of Sycophancy: Structural Conditions for the Emergence of Dictators’ Cults of Personality, Adrian Teodor Popan defines cult of personality as a "quantitatively exaggerated and qualitatively extravagant public demonstration of praise of the leader". He also identifies three causal "necessary, but not sufficient, structural conditions, and a path dependent chain of events which, together, lead to the cult formation: a particular combination of patrimonialism and clientelism, lack of dissidence, and systematic falsification pervading the society’s culture."[3]

Pampler has written that modern day personality cults display five characteristics that set them apart from "their predecessors": The cults are secular and "anchored in popular sovereignty"; their objects are all males; they target the entire population, not only the well-to-do or just the ruling class; they use mass media; and they exist where the mass media can be controlled enough to inhibit the introduction of "rival cults".[4]

In his What is character and why it really does matter, Thomas A. Wright states, "The cult of personality phenomenon refers to the idealized, even god-like, public image of an individual consciously shaped and molded through constant propaganda and media exposure. As a result, one is able to manipulate others based entirely on the influence of public personality...the cult of personality perspective focuses on the often shallow, external images that many public figures cultivate to create an idealized and heroic image."[5]

Teodor Popan notes that "The cult of the leader has been already defined by scholars in various ways. Only two characteristics of the cult have been identified by all scholars who deal with the phenomenon: first, it is defined by a quasi-ubiquitous praise, manifested through eulogistic articles in mass-media and adulatory public parades, and, second, the adulation of the leader is not entirely sincere, but largely coerced through employing the state apparatus in the organization of the named parades."[6]

The role of the media

The media has played an instrumental role in forging national leaders' cults of personality.

Thomas A. Wright reports that, "It is becoming evident that the charismatic leader, especially in politics, has increasingly become the product of media and self-exposure."[7] And, focusing on the media in the United States, Robert N. Bellaht adds that, "It is hard to determine the extent to which the media reflect the cult of personality in American politics and to what extent they have created it. Surely they did not create it all alone, but just as surely they have contributed to it. In any case, American politics is dominated by the personalities of political leaders to an extent rare in the modem world...in the personalized politics of recent years the "charisma" of the leader may be almost entirely a product of media exposure."[8] 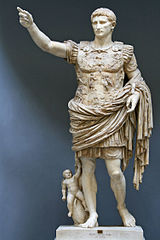 The Imperial cult of ancient Rome identified emperors and some members of their families with the divinely sanctioned authority (auctoritas) of the Roman State. Throughout history, monarchs and other heads of state were often held in enormous reverence and imputed super-human qualities. Through the principle of the divine right of kings, in medieval Europe for example, rulers were said to hold office by the will of God. Ancient Egypt, Japan, the Inca, the Aztecs, Tibet, Siam (now Thailand), and the Roman Empire are especially noted for redefining monarchs as "god-kings".

The spread of democratic and secular ideas in Europe and North America in the 18th and 19th centuries made it increasingly difficult for monarchs to preserve this aura. However, the subsequent development of mass media, such as radio, enabled political leaders to project a positive image of themselves onto the masses as never before. It was from these circumstances in the 20th century that the most notorious personality cults arose. Often these cults are a form of political religion.[9]

Often, a single leader became associated with this revolutionary transformation and came to be treated as a benevolent "guide" for the nation without whom the transformation to a better future could not occur. This has been generally the justification for personality cults that arose in totalitarian societies, such as those of Adolf Hitler, Joseph Stalin, and Mao Zedong. Jan Plamper argues while Napoleon III made some innovations it was Benito Mussolini in Italy in the 1920s who originated the model of dictator-as-cult-figure that was emulated by Hitler, Stalin and the others, using the propaganda powers of a totalitarian state.[10]

Pierre du Bois argues that the Stalin cult was elaborately constructed to legitimize his rule. Many deliberate distortions and falsehoods were used.[11] The Kremlin refused access to archival records that might reveal the truth, and key documents were destroyed. Photographs were altered and documents were invented.[12] People who knew Stalin were forced to provide "official" accounts to meet the ideological demands of the cult, especially as Stalin himself presented it in 1938 in Short Course on the History of the All-Union Communist Party (Bolsheviks), which became the official history.[13]

Historian David L. Hoffmann states "The Stalin cult was a central element of Stalinism, and as such it was one of the most salient features of Soviet rule....Many scholars of Stalinism cite the cult as integral to Stalin's power or as evidence of Stalin's megalomania."[14]

Not all dictatorships foster personality cults, while not all personality cults are practiced in dictatorships (they can exist in democratic countries), and some leaders may actively seek to minimize their own public adulation. For example, during the Democratic Kampuchean Khmer Rouge regime, images of dictator Pol Pot (Saloth Sar) were rarely seen in public, and his identity was under dispute abroad until after his fall from power. This may be because his goal was not to be loved or respected by the population, but to fundamentally transform it by eliminating all counter-revolutionary elements. A different restraint applied to numerous Eastern European communist regimes following World War II, which didn't want to appear to challenge Soviet influence, although such moderation did not apply to the regimes of Enver Hoxha, Nicolae Ceaușescu and Josip Broz Tito).[citation needed]

A cult of personality also emerged in the Church of Scientology around founder L. Ron Hubbard, and his successor David Miscavige. Similar forms of veneration have appeared in many cult-like movements like the Peoples Temple, whose leaders often demand absolute obedience.[15]

The American band Living Colour won a Grammy Award for Best Hard Rock Performance in 1990 for their signature anthem "Cult of Personality".[16][17]