The culture of Florida is similar to the rest of United States of America culture, but as a coastal state, Florida culture has been influenced by immigrant populations, especially those from Europe and Latin America. Florida is a melting pot as well as an international crossroad to the United States. 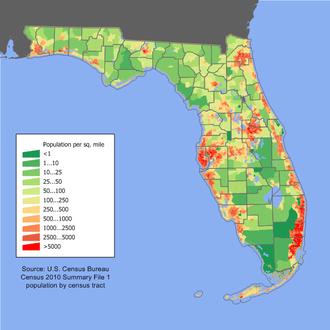 Also, as one of the New Spain states, it shares history, culture, food and other things with the Spanish, especially Cuban and Puerto Rican.

Florida is known for several unique foods including key lime pie and Floribbean cuisine. Citrus production is a major industry and citrus fruits are widely consumed.

Current trends in the state of Florida include a rapidly growing population in excess of four hundred thousand annually. The state government is embracing the increasing peoples by mandating new libraries, schools and highways to be thoroughly completed. Demographically, Florida has an older population in the Northwestern counties; where a lot of retired people migrate every year. However, Southern Florida is broadly urban with a large youth population and many college campuses that are dependent on tourism. The budgetary decisions taken by the federal government has a severe impact on the population fluctuations in the southern parts of Florida.[1]

As of 2005, 74.54 percent of Florida residents age 5 and older spoke English at home as a first language, while 18.65 percent spoke Spanish, and 1.73 percent of the population spoke French Creole (predominantly Haitian Creole). French was spoken by 0.63 percent, followed by German at 0.45 percent, and Portuguese at 0.44 percent of all residents. Also, Italian comprised 0.32 percent, while Tagalog made up 0.30 percent of speakers, Vietnamese was at 0.25 percent and Arabic at 0.23 percent. In all, 25.45 percent of Florida's population age 5 and older spoke a language other than English.[2]

Florida's public education system identifies over 200 first languages other than English spoken in the homes of students. In 1990, the League of United Latin American Citizens (LULAC) won a class action lawsuit against the state Florida Department of Education that required educators to be trained in teaching English for Speakers of Other Languages (ESOL).

Florida is mostly Protestant, but Roman Catholicism is the single largest denomination in the state. There is also a sizable Jewish community, located mainly in South Florida. Florida's current religious affiliations are shown in the table below:[3]

Sports in Florida include professional teams in all major sports, many minor league professional teams, Olympic Games contenders and medalists, collegiate teams in major and small-school conferences and associations, and active amateur teams and individual sports.