Culture of the Soviet Union

The culture of the Soviet Union passed through several stages during the 69-year existence of the Soviet Union. It was contributed to by people of various nationalities from every of 15 union republics, although a slight majority of them were Russians. The Soviet state supported cultural institutions, but also carried out strict censorship.

The main feature of communist attitudes towards the arts and artists in the years 1918-1929 was relative freedom and significant experimentation with several different styles in an effort to find a distinctive Soviet style of art.

At first artists and writers were given a fair amount of freedom but many fled Russia because of their opposition to the Bolshevik government. Lenin was a traditional man in art. He hated the new 'isms' (Futurism, Expressionism) and wanted art to be kept to traditional ways, yet he did nothing to discourage the spread of Futurism in Russia. Lenin showed his support to the art scene and wanted art to be accessible to the masses. He nationalised many private art collections and created the Museum of New Western Art in Moscow. Lenin wanted at the beginning to have full control of the art system and he appointed Izo-Narkompros to take control. The proletkult movement soon sprung up after the February Revolution. Its members wanted to make art more sympathetic to the masses and to encourage more participation in the arts. Many new art studios were set up in many cities. Its movement was progressive and its members pro-revolutionary.

In many respects, the NEP period was a time of relative freedom and experimentation for the social and cultural life of the Soviet Union. The government tolerated a variety of trends in these fields, provided they were not overtly hostile to the regime. In art and literature, numerous schools, some traditional and others radically experimental, proliferated. Communist writers Maxim Gorky and Vladimir Mayakovsky were active during this time, but other authors, many of whose works were later repressed, published work lacking socialist political content. Film, as a means of influencing a largely illiterate society, received encouragement from the state; much of cinematographer Sergei Eisenstein's best work dates from this period.

Education, under Commissar Anatoliy Lunacharskiy, entered a phase of experimentation based on progressive theories of learning. At the same time, the state expanded the primary and secondary school system and introduced night schools for working adults. The quality of higher education suffered, however, because admissions policies preferred entrants from the proletarian class over those of bourgeois backgrounds, regardless of the applicants' qualifications.

Under NEP the state eased its active persecution of religion begun during war communism but continued to agitate on behalf of atheism. The party supported the Living Church reform movement within the Russian Orthodox Church in hopes that it would undermine faith in the church, but the movement died out in the late 1920s.

In family life, attitudes generally became more permissive. The state legalized abortion, and it made divorce progressively easier to obtain, whilst public cafeterias proliferated at the expense of private family kitchens.

Arts during the rule of Joseph Stalin were characterized by the rise and domination of the government-imposed style of Socialist realism, with all other trends being severely repressed, with rare exceptions (e.g., many notable Mikhail Bulgakov's works - however the full text of his The Master and Margarita was published only in 1966). Many writers were imprisoned and killed or died of starvation, examples being Daniil Kharms, Osip Mandelstam, Isaac Babel and Boris Pilnyak. Andrei Platonov worked as a caretaker and wasn't allowed to publish. The work of Anna Akhmatova was also condemned by the regime, although she notably refused the opportunity to escape to the West. After a short period of the renaissance of the Ukrainian literature more than 250 Soviet Ukrainian writers died during the Great Purge (e.g. Valeran Pidmohyl'nyi (1901–1937)) (so called The Executed Renaissance). Texts of imprisoned authors were confiscated by the NKVD and some of them were published later. Books were removed from libraries and destroyed.

In addition to literature, musical expression was also repressed during the Stalin era, and at times the music of many Soviet composers was banned altogether. Dmitri Shostakovich experienced a particularly long and complex relationship with Stalin, during which his music was denounced and prohibited twice, in 1936 and 1948 (see Zhdanov decree). Sergei Prokofiev and Aram Khachaturian had similar cases. Although Igor Stravinsky did not live in the Union, his music was officially considered formalist and anti-Soviet. 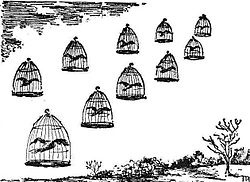 Vitaliy Peskov. Caricature of the Soviet life (the 1970s years) 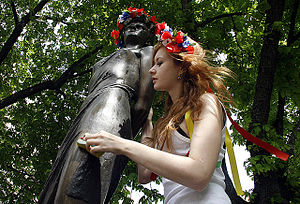 In arts, the liberalization of all aspects of life starting from the Khrushchev Thaw created a possibility for the evolution of various forms of non-formal, underground and dissident art; still repressed, but no longer under the immediate threat of Gulag labor camps[citation needed]. Alexander Solzhenitsyn, who wrote the critical One Day in the Life of Ivan Denisovich, was awarded the Nobel Prize in Literature and subsequently exiled from the Soviet Union.

Greater experimentation in art forms became permissible in the 1970s, with the result that more sophisticated and subtly critical work began to be produced. The regime loosened the strictures of socialist realism; thus, for instance, many protagonists of the novels of author Iurii Trifonov concerned themselves with problems of daily life rather than with building socialism. In music, although the state continued to frown on such Western phenomena as jazz and rock, it began to permit Western musical ensembles specializing in these genres to make limited appearances. But the native balladeer Vladimir Vysotsky, widely popular in the Soviet Union, was denied official recognition because of his iconoclastic lyrics.