From Infogalactic: the planetary knowledge core
Jump to: navigation, search
This article is about the historical state. For the modern Hungarian region, see Kunság.

The name Cumania originated as the Latin exonym for the Cuman-Kipchak confederation, which was a Turkic confederation in the western part of the Eurasian Steppe, between the 10th and 13th centuries. The confederation was dominated by two Turkic nomadic tribes: the Cumans (also known as the Polovtsians or Folban) and the Kipchaks. Cumania was known in Islamic sources as Desht-i Qipchaq, which means "Steppe of the Kipchaks"; or "foreign land sheltering the Kipchaks", in the Turkic languages.[4] Some Russian sources have referred to Cumania as the "Polovtsian Steppe" (Poloveckaja Step), or the "Polovcian Plain" (Pole Poloveckoe).[5]

The Golden Horde was also referred to as "Comania" by Armenian chronicler Hethum (Hayton) of Korykos.[6] "Cumania" was also the source of names, or alternate names, for several smaller areas – some of them unconnected geographically to the area of the federation – in which Cumans and/or Kipchaks settled, such as the historic region of Kunság in Hungary, and the former Roman Catholic Diocese of Cumania (in Romania and Hungary). Hethum of Korykos described Cumania as "wholly flat and with no trees".[6] Ibn Batutta said of Cumania, "This wilderness is green and grassy with no trees, nor hills, high or low...there is no means of travelling in this desert except in wagons." Battuta's contemporary, Hamdallah Mustawfi, eloborated, "This is of the Sixth Clime, its plains bear excellent pasturage...but there are here few houses or towns or villages. Most of the inhabitants are nomads of the plain...Most of the lands here are swamps...The pasturage, however, being excellent, horses and cattle are numerous, and the population for the most part subsists on the produce thereof. The climate is cold, and their water comes from springs and wells."[7] 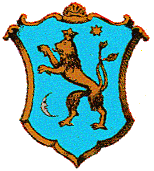 Coat of Arms of Cumania

By the 11th and 12th centuries, the nomadic confederacy of the Cumans and (Eastern) Kipchaks (who were a distinct tribe with whom the Cumans created a confederacy) were the dominant force over the vast territories stretching from the present-day Kazakhstan, southern Russia, Ukraine, to southern Moldavia and western Wallachia. Considering the nomadic way of life of these peoples, these frontiers can be regarded only as approximate; hence there were various definitions over what Cumania meant over the course of time. Depending on their region and their time, different sources each used their own vision to denote different sections of the vast Cuman territory: in Byzantine, Russian, Georgian, Armenian, Persian and Muslim sources, Cumania meant the Pontic steppe, that is the steppelands to the north of the Black Sea and on its eastern side as far as the Caspian Sea, where the lowlands between the Dnipro River, the Volga, the Ural and the Irtysh rivers were favorable to the nomadic lifestyle of the Cumans. Later, for a short time period, in Western sources Cumania also referred to the area in eastern Wallachia and southern Ukraine (centered on the lowlands of Budjak and the Bărăgan Plain), referring to the area where the first contact between the Cumans and the Western Christians took place, and where, later, the Cumans of the region would accept Roman Catholicism.

As in the case of many other large nomadic Eurasian confederacies, the ethnonym "Cuman" (referring to the inhabitants of Cumania) denoted different ethnic realities. While the main component was probably the Turkic-speaking tribes, the confederacy included other ethnic components as well. Cumania was primarily a political name, referring to the leading, integrating tribe or clan of the confederacy or state. The Cumans, when they first appear in written sources, are members of a confederacy irrespective of their tribal origin. Former tribal names disappeared when the tribe in question became part of a political unit. For instance, when we hear of an incursion of Cumans, it means that certain tribes of the Cuman confederacy took part in a military enterprise. In his "History of the Mongols", the Persian historian Rashid-al-Din Hamadani, referred to Cumania around 1236-1237, during the Mongol invasion of Möngke, the future Great Khan of the Mongol Empire. Among others, he mentions the Kipchaks, the Turkophone Asi (probably the same as the later Jassic tribe) and the "Karaulaghi" (Black, i.e. "from the north", Vlachs)[8] 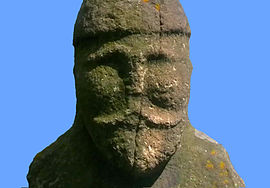 The vast territory of this Cuman-Kipchak realm, consisting of loosely connected tribal units who were the military dominating force, was never politically united by a strong central power. Cumania was neither a state nor an empire, but different groups under independent rulers, or khans, who acted on their own initiative, meddling in the political life of the surrounding states: the Russian principalities, Bulgaria, Byzantium and the Wallachian states in the Balkans, Armenia and Georgia (see Kipchaks in Georgia) in the Caucasus, and Khwarezm, having reached as far as to create a powerful caste of warriors, the Mamluks, serving the Muslim Arab and Turkish Caliphs and Sultans.

In the Balkans, we find the Cumans in contact with all of the statal entities of that time, fighting with the Kingdom of Hungary, allied with the Bulgarians and Vlachs against the Byzantine Empire, and involved into the politics of the fresh Vlach statal entities. For example, Thocomerius, by name apparently a Cuman warlord (also known as Tihomir, he might have been a Bulgarian noble), was possibly the first one to unite the Vlach states from the west and the east of the Olt River, and his son Basarab I is considered the first ruler of the united and independent Wallachia. This interpretation corresponds with the general view of the situation of the Romanian lands in the 11th century, with the natives living in collections of village communities, united in various small confederacies, with more or less powerful chiefs trying to create little kingdoms, some paying tribute to the various militarily dominant nomadic tribes (see Romania in the Middle Ages).

This pontic Cumania, (and the rest of the Cumanias to the east), ended its existence in the middle of the 13th century, with the Great Mongol Invasion of Europe. In 1223, Genghis Khan defeated the Cumans and their Rus' allies at the Battle of Kalka (in modern Ukraine), and the final blow came in 1241, when the Cuman confederacy ceased to exist as a political entity, with the remaining Cuman tribes being dispersed, either becoming subjects of the Mongol conquerors as part of what was to be known as the Golden Horde, or fleeing to the west, to the Byzantine Empire, the Bulgarian Empire, and the Kingdom of Hungary. 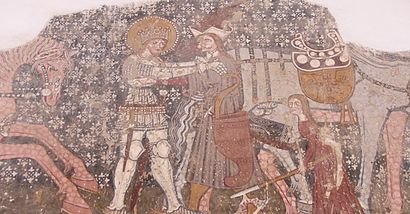 Cumania name was also preserved as part of the Roman Catholic ecclesiastical structure with a "Diocese of Cumania" existing until 1523 in what is now Romania, long after the Cumans ceased to be a distinct group in the area. At Milcov, years earlier, in 1227, the Cuman warlord Bortz accepted Catholic Christianity from missionary Dominican monks. Pope Gregory IX heard about the mass conversion of the Cumans, and on 1 July 1227 empowered Robert, Archbishop of Esztergom, to represent him to Cumania and in neighbouring Land of the Brodnici. Teodoric, the bishop of this new diocese, became the guardian of the Dominican Order in the Kingdom of Hungary.[9]

Hence, Cumania diocese became part of the superior archbishopric of Esztergom, determining King Béla IV of Hungary to add "Rex Cumaniae" (King of Cumania)[10] to his titles in 1228, and later to grant asylum to the Cumans in face of the Mongol invasion. The Diocese of Cumania, or of Milcov, had subordinated in Transylvania the abbacy of Sibiu, the dioceses of Burzenland, Brasso and Orbai, and over the Carpathians, in the lands of the "infidel" Orthodox Vlachs (in partibus infidelium), all the Christian Catholics, irrespective of their ethnicity, despite the fact that many believers fell under the influence of the Romanian Orthodox "pseudo" bishops (episcopo Cumanorum, qui loci diocesanus existit, sed a quibusdam pseudoepiscopis Graecorum ritum tenentibus).[11]

So, at that moment, Hungarian and Papal documents use the name Cumania to refer to the land between the eastern border of the lands of Seneslau and the land of the Brodnici (Buzău, southern Vrancea and southern Galaţi): that is Cumania meant, more or less, Muntenia. At that time, the use of the name Cumania should not to be understood as asserting the existence of a Cuman state, nor even a land inhabited by Cuman tribes (as the bulk of them had either fled, or were destroyed by the Mongols, and the rest had been absorbed) but rather to the Diocese of Cumania. From the military point of view, the land comprising the Diocese of Cumania was held either by the Teutonic Order (as early as 1222), or by the Vlachs (Brodnics or the Vlachs of Seneslau). The term Cumania had come to mean any Catholic subordinated to the Milcov Diocese, so much so that in some cases, the terms Cuman and Wallach (more precisely, Roman Catholic Wallach, as the Orthodox Christians were considered schismatic, and the Pope did not officially recognise them) were interchangeable,[12] (as were the terms Wallach and Brodnic).