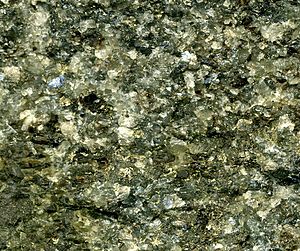 A cumulate rock from Montana

Cumulate rocks are the typical product of precipitation of solid crystals from a fractionating magma chamber. These accumulations typically occur on the floor of the magma chamber, although they are possible on the roofs if anorthite plagioclase is able to float free of a denser mafic melt.

Cumulates are typically found in ultramafic intrusions, in the base of large ultramafic lava tubes in komatiite and magnesium rich basalt flows and also in some granitic intrusions.

Cumulates are named according to their dominant mineralogy and the percentage of crystals to their groundmass(Hall, 1996).

Cumulate rocks are typically named according to the cumulate minerals in order of abundance, and then cumulate type (adcumulate, mesocumulate, orthocumulate), and then accessory or minor phases. For example:

Cumulate terminology is appropriate for use when describing cumulate rocks. In intrusions which have a uniform composition and minimal textural and mineralogical layering or visible crystal accumulations it is inappropriate to describe them according to this convention.

Cumulate rocks, because they are fractionates of a parental magma, should not be used to infer the composition of a magma from which they are formed. The chemistry of the cumulate itself can inform on the residual melt composition, but several factors need to be considered.

The chemistry of a cumulate can inform upon the temperature, pressure and chemistry of the melt from which it was formed, but the number of minerals which co-precipitate need to be known, as does the chemistry or mineral species of the precipitated minerals. This is best illustrated by an example;

As an example, a magma of basalt composition that is precipitating cumulates of anorthite plagioclase plus enstatite pyroxene is changing composition by the removal of the elements which make up the precipitated minerals. In this example, the precipitation of anorthite (a calcium aluminium feldspar) removes calcium from the melt, which becomes more depleted in calcium. Enstatite being precipitated from the melt will remove magnesium, so the melt becomes depleted in these elements. This tends to enrich the concentration of other elements - typically sodium, potassium, titanium and iron.

In the above example, the plagioclase and pyroxene need not be pure end-member compositions (anorthite-enstatite), and thus the effect of depletion of elements can be complex. The minerals can be precipitated in any ratio within the cumulate; such cumulates can be 90% plagioclase:10% enstatite, through to 10% plagiclase:90% enstatite and remain a gabbro. This also alters the chemistry of the cumulate, and the depletions of the residual melt.

A specific example is the Skaergaard intrusion in Greenland. At Skaergaard a 2500 m thick layered intrusion shows distinct chemical and mineralogic layering:[1]

The Skaergaard is interpreted to have crystallised from a single confined magma chamber.[1]

One way to infer the composition of the magma that created the cumulate rocks is to measure groundmass chemistry, but that chemistry is problematic or impossible to sample. Otherwise, complex calculations of averaging cumulate layers must be utilised, which is a complex process. Alternatively, the magma composition can be estimated by assuming certain conditions of magma chemistry and testing them on phase diagrams using measured mineral chemistry. These methods work fairly well for cumulates formed in volcanic conditions (i.e.; komatiites). Investigating magma conditions of large layered ultramafic intrusions is more fraught with problems.

These methods have their drawbacks, primarily that they must all make certain assumptions which rarely hold true in nature. The foremost problem is the fact that in large ultramafic intrusions, assimilation of wall rocks tends to alter the chemistry of the melt as time progresses, so measuring groundmass compositions may fall short. Mass balance calculations will show deviations from expected ranges, which may infer assimilation has occurred, but then further chemistry must be embarked upon to quantify these findings.

Secondly, large ultramafic intrusions are rarely sealed systems and may be subject to regular injections of fresh, primitive magma, or to loss of volume due to further upward migration of the magma (possibly to feed volcanic vents or dyke swarms). In such cases, calculating magma chemistries may resolve nothing more than the presence of these two processes having affected the intrusion.

The economic importance of cumulate rocks is best represented by three classes of mineral deposits found in ultramafic to mafic layered intrusions.

Silicate minerals are rarely sufficiently valuable to warrant extraction as ore. However, some anorthosite intrusions contain such pure anorthite concentrations that they are mined for feldspar, for use in refractories, glassmaking and other sundry uses (toothpaste, cosmetics, etcetera).

These conditions are created by the high-temperature fractionation of highly magnesian olivine and/or pyroxene, which causes a relative iron-enrichment in the residual melt. When the iron content of the melt is sufficiently high enough, magnetite or ilmenite crystallise and, due to their high density, form cumulate rocks. Chromite is generally formed during pyroxene fractionation at low pressures, where chromium is rejected from the pyroxene crystals.

Sulfide mineral cumulates in layered intrusions are an important source of nickel, copper, platinum group elements and cobalt. Deposits of a mixed massive or mixed sulfide-silicate 'matrix' of pentlandite, chalcopyrite, pyrrhotite and/or pyrite are formed, occasionally with cobaltite and platinum-tellurium sulfides. These deposits are formed by melt immiscibility between sulfide and silicate melts in a sulfur-saturated magma.

They are not strictly a cumulate rock, as the sulfide is not precipitated as a solid mineral, but rather as immiscible sulfide liquid. However, they are formed by the same processes and accumulate due to their high specific gravity, and can form laterally extensive sulfide 'reefs'. The sulfide minerals generally form an interstitial matrix to a silicate cumulate.

Sulfide mineral segregations can only be formed when a magma attains sulfur saturation. In mafic and ultramafic rocks they form economic Ni, Cu and PGE deposits because these elements are chalcophile and are strongly partitioned into the sulfide melt. In rare cases, felsic rocks become sulfur saturated and form sulfide segregations. In this case, the typical result is a disseminated form of sulfide mineral, usually a mixture of pyrrhotite, pyrite and chalcopyrite, forming Cu mineralisation. It is very rare but not unknown to see cumulate sulfide rocks in granitic intrusions.