For the cricket competition originally known as the Currie Cup, see Sunfoil Series.

Steeped in history and tradition, the Currie Cup dates back to 1889. The tournament is regarded as the cornerstone of South Africa's rugby heritage, and the coveted gold trophy remains the most prestigious prize in South African domestic rugby.[citation needed]

The Currie Cup is one of the oldest rugby competitions,[citation needed] with the first games played in 1889 but it was only in 1892 that it became officially known as the Currie Cup. The competition had its humble beginnings as an inter-province competition in 1884, but when the South African Rugby Board was founded in 1889 it decided to organize a national competition that would involve representative teams from all the major unions. The original participating unions were Western Province, Griqualand West, Transvaal and Eastern Province. The first tournament was held in Kimberley and was won by Western Province. For a prize they received a silver cup donated by the South African Rugby Board, now displayed at the SA Rugby Museum in Cape Town. The story of how the Currie Cup came to be comes from the first overseas rugby team to tour South Africa in 1891, The British Isles, who carried with them a particularly precious bit of cargo. Among the bags, boots and balls was a golden cup given to them by Sir Donald Currie, owner of Union-Castle Lines, the shipping company that transported them to the southern tip of Africa. Sir Donald was clear with his instructions – hand this trophy over to the team in South Africa that gives you the best game; and after a spirited display where the unbeaten British Lions narrowly won 3-0, Griqualand West became the first ever holders of the Currie Cup. They then handed the trophy over to the South African rugby board and it became the floating trophy for the Currie Cup competition. The inaugural Currie Cup tournament was thus held in 1892 with Western Province earning the honour of holding it aloft as the first official winners.

The competition missed a few years here and there for reasons such as war and the like, but in 1968 it became a fully fledged annual showpiece. Western Province dominated the competition's early years, and by 1920 the team from Cape Town had already secured the trophy 10 times. Only Griqualand West could halt the rampant WP side and win the trophy in 1899 and 1911. In 1922 the Transvaal won the competition for the first time, however Western Province would continue to dominate the Currie Cup throughout the 1920s and 1930s, winning the trophy a further 4 times and sharing it twice with Border Bulldogs. In 1939 the trophy returned to Johannesburg for only the second time after Transvaal defeated Western Province in Cape Town. This was the first time WP had lost a final at their home ground Newlands. The Currie Cup went into hiatus during the Second World War but resumed in 1946 when Northern Transvaal claimed their first ever trophy by beating Western Province 11-9 in the final at Loftus Versveld in Pretoria. The late 1940s and early 1950s were dominated by Transvaal who would win the trophy in 1950 and 1952, however in 1954 the Currie Cup would finally return south following Western Province narrow 11-8 victory over Northern Transvaal in the final at Newlands in Cape Town.

At the turn of the decade South African rugby supporters were treated to two of the most memorable Currie Cup finals. In 1989 winger Carel du Plessis scored a last-minute try as WP managed to draw with Northern Transvaal 16-all, Riaan Gouws missed the conversion which would have given WP its 6th title of the decade a feat which has never been achieved. The following year the Blue Bulls slipped up, though, and WP sneaked home 18-12, inspired by fly-half Joel Stransky. The 1990s saw further improvement by Natal and the rise of Francois Pienaar’s Transvaal. Since the age of professionalism in rugby union in the early 1990s, the Currie Cup has become much more competitive with no team able to carve out an era of dominance like that of WP in the early years or Northern Transvaal in the 1970s and 1980s. All five of the so-called 'big unions' have won the Currie Cup on at least one occasion in the last 20 years; the Golden Lions (formally Transvaal) have won the trophy 3 times in 1994, 1999 and 2011; Western Province have won the trophy on five occasions in 1997, 2000, 2001, 2012 and 2014; the Blue Bulls (formally Northern Transvaal) have one the trophy 4 times in 2002, 2003, 2004 and 2009; the Free State Cheetahs have won the trophy twice in 2005 and 2007 and the Natal Sharks have won the trophy five times in 1995, 1996, 2008, 2010 and 2013. In 2006 the trophy was shared by the Free State Cheetahs and Blue Bulls following their 28-28 all draw in a tense final in Bloemfontein. Whilst these days the competition lags behind Super Rugby and The Rugby Championship (previously the Tri-Nations) in the order of importance, the Currie Cup still holds a special place amongst South African rugby supporters and players, with the trophy very much still the holy grail of the South African domestic rugby scene.[citation needed] 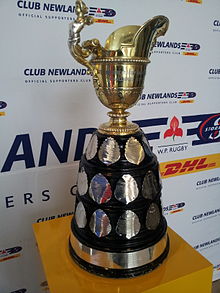 The current Currie Cup format sees the competition split into two divisions. The six franchise unions (Blue Bulls, Eastern Province Kings, Free State Cheetahs, Golden Lions, Natal Sharks and Western Province) will play in the Premier Division, along with two qualifiers. Teams can either qualify by finishing in the top six the previous season or via a qualification tournament. The six teams that fail to qualify for the Premier Division from the qualification tournament will play in the First Division.

The qualification competition will see all teams play each other once, with either one or two teams qualifying to the Premier Division (to bring the number of teams up to eight).

In the round-robin phase of the Premier Division, the eight teams are divided into two sections. Teams will play the other teams in their section in a double round-robin format, plus a single round of matches against the teams in the other section, making 10 games in total. In the round-robin phase of the First Division, results from the qualification tournament are carried into the competition and all teams will then play each other one more time, also making a total of 10 matches.

Teams are awarded four points for a win, two for a draw, and zero for a loss. Single bonus points are awarded to teams by two possible outcomes; scoring four tries in a match, or losing a match by seven points or less. Thus, the winner of a match can receive four or five points, whereas a loser can receive up to two points for a loss depending on whether they gain any bonus points.

At the close of the round-robin phase, the top four teams in each division, based on points totals, advance to the knock-out stages. The semi-finals are hosted by the teams finishing first and second on the log, and they play the third and fourth placed teams respectively. The final is held at the home ground of the highest ranked semi-final winner. The winner of the Premier Division final wins the Currie Cup trophy, while the winner of the First Division wins the SA Cup trophy.

The bottom two teams in the Currie Cup Premier Division will have to compete in the qualification competition the following season, provided they're not one of the six franchise teams. 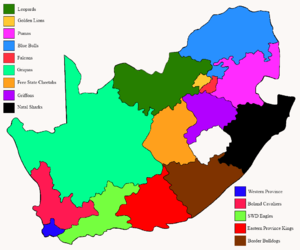 Since 1996, the following 14 provincial unions participated in the Currie Cup:

In addition to the winners above, Western Province also won the South African Rugby Board Trophy in 1889. This tournament was effectively the precursor to the Currie Cup, which started in 1892.

Since the competition become established as an annual competition in 1968 (see History above).