From Infogalactic: the planetary knowledge core
Jump to: navigation, search
For more details on this topic, see Anti-communist resistance in Poland (1944–46). 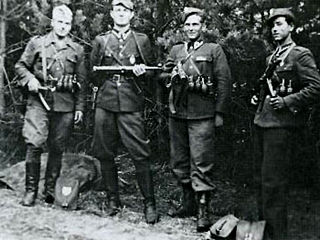 The cursed soldiers (that is, "accursed soldiers" or "damned soldiers"; Polish: Żołnierze wyklęci) is a name applied to a variety of anti-communist Polish resistance movements formed in the later stages of World War II and afterwards. Created by some members of the Polish Secret State, these clandestine organizations continued their armed struggle against the Stalinist government of Poland well into the 1950s. The guerrilla warfare included an array of military attacks launched against the new communist prisons as well as MBP state security offices, detention facilities for political prisoners, and concentration camps set up across the country. Most of the Polish anti-communist groups ceased to exist in the late 1940s or 1950s, hunted down by MBP security services and NKVD assassination squads.[1] However, the last known 'cursed soldier', Józef Franczak, was killed in an ambush as late as 1963, almost 20 years after the Soviet take-over of Poland.[2][3] 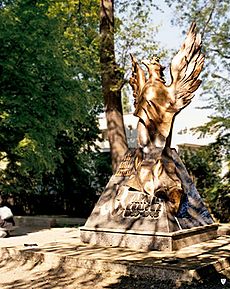 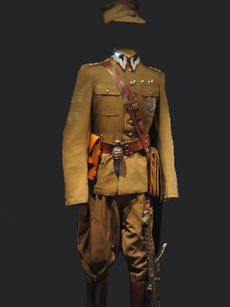 Uniform of Polish anticommunist fighter, with breast badge displaying image of the Black Madonna of Częstochowa 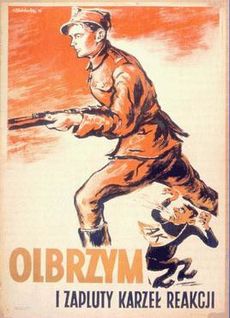 "The giant and the spittly dwarf of the reaction". Postwar communist propaganda poster showing soldier of the AL stepping over the underground fighter of AK

With the advance of Soviet forces across Poland against Nazi Germany, the Soviet and Polish communists who set up the brand new government called the Polish Committee of National Liberation in 1944 realized that the Polish Secret State loyal to the Polish government-in-exile had to be abolished before they could gain complete control over Poland.[4] Future General Secretary of the Polish United Workers' Party Władysław Gomułka pronounced that "Soldiers of AK are a hostile element which must be removed without mercy". Another prominent communist, Roman Zambrowski, said that the AK had to be "exterminated".[5]

Armia Krajowa (or simply AK)-the main Polish resistance movement in World War II-had officially disbanded on 19 January 1945 to prevent a slide into armed conflict with the Red Army, including an increasing threat of civil war over Poland's sovereignty. However, many units decided to continue on with their struggle under new circumstances, seeing the Soviet forces as new occupiers. Meanwhile, Soviet partisans in Poland had already been ordered by Moscow on June 22, 1943 to engage Polish Leśni partisans in combat.[6] They commonly fought Poles more often than they did the Germans.[4] The main forces of the Red Army (Northern Group of Forces) and the NKVD had begun conducting operations against AK partisans already during and directly after the Polish Operation Tempest, designed by the Poles as a preventive action to assure Polish rather than Soviet control of the cities after the German withdrawal.[5] Soviet premier Joseph Stalin aimed to ensure that an independent Poland would never reemerge in the postwar period.[7]

Formation of the anti-communist underground

The first AK structure designed primarily to deal with the Soviet threat was the NIE, formed in mid-1943. NIE's goal was not to engage the Soviet forces in combat, but rather to observe and conduct espionage while the Polish government-in-exile decided how to deal with the Soviets. At that time, the exiled government still believed that the solution could be found through negotiations. On May 7, 1945, the NIE ("NO") was disbanded and transformed into the Delegatura Sił Zbrojnych na Kraj ("Armed Forces Delegation for Homeland"). However, this organization lasted only until August 8, 1945, when the decision was made to disband it and to stop partisan resistance on Polish territory.[5]

In March 1945 a staged trial of 16 leaders of the Polish Underground State held by the Soviet Union took place in Moscow - (the Trial of the Sixteen).[8][9][10][11] The Government Delegate, together with most members of the Council of National Unity and the C-i-C of the Armia Krajowa, were invited by Soviet general Ivan Serov with agreement of Joseph Stalin to a conference on their eventual entry to the Soviet-backed Provisional Government. They were presented with a warrant of safety, but the NKVD arrested them in Pruszków on 27 and 28 March.[12][13] Leopold Okulicki, Jan Stanisław Jankowski and Kazimierz Pużak were arrested on 27th with 12 more the next day. A.Zwierzynski had been arrested earlier. They were brought to Moscow for interrogation in the Lubyanka.[14][15][16] After several months of brutal interrogation and torture[17] they were presented with the forged accusations of "collaboration with Nazi Germany" and of "planning a military alliance with Nazi Germany".[18][19]

The first Polish communist government, the Polish Committee of National Liberation, was formed in July 1944, but declined jurisdiction over AK soldiers. Consequently, for more than a year, it was Soviet agencies like the NKVD that dealt with the AK. By the end of the war, approximately 60,000 soldiers of the AK had been arrested, and 50,000 of them were deported to the Soviet Union's prisons and prison camps. Most of those soldiers had been captured by the Soviets during or in the aftermath of Operation Tempest, when many AK units tried to cooperate with the Soviets in a nationwide uprising against the Germans. Other veterans were arrested when they decided to approach the government after being promised amnesty. In 1947, an amnesty was passed for most of the partisans; the communist authorities expected around 12,000 people to give up their arms, but the actual number of people to come out of the forests eventually reached 53,000. Many of them were arrested despite promises of freedom; after repeated broken promises during the first few years of communist control, AK soldiers stopped trusting the government.[5]

The third AK organization was Wolność i Niezawisłość ("Freedom and Sovereignty"). Again, its primary goal was not combat; rather, the WiN was designed to help AK soldiers make the transition from a life as partisans to that of civilians. The continued secrecy and conspiracy were necessary in light of the increasing persecution of AK veterans by the communist government. WiN was, however, much in need of funds to pay for false documents and to provide resources for the partisans, many of whom had lost their homes and entire life-savings in the war. Viewed as enemies of the state, starved of resources, and with a vocal faction advocating armed resistance against the Soviets and their Polish proxies, WiN was far from efficient. A significant victory for the NKVD and the newly created Polish secret police, Urząd Bezpieczeństwa (UB), came in the second half of 1945, when they managed to convince several leaders of the AK and WiN that they truly wanted to offer amnesty to AK members. Within a few months, they managed to gain information about vast numbers of AK/WiN resources and people. Several months later when the (imprisoned) AK and WiN leaders realized their mistake, the organization was crippled and thousands more of their members were arrested.[5] The primary period of WiN activity lasted to 1947; it finally disbanded in 1952.[20]

The NKVD and UB used brute force and deception to eliminate the underground opposition. In the autumn of 1946, a group of 100–200 soldiers of Narodowe Siły Zbrojne (National Armed Forces, NSZ) were lured into a trap and massacred. In 1947, Colonel Julia ("Bloody Luna") Brystiger of the Polish Ministry of Public Security declared at the security briefing, that "[t]he terrorist and political underground had ceased to be a threatening force," although the class enemy at universities, offices and factories still had to be "found out and neutralized."[5]

The persecution of the AK members was only a part of the reign of Stalinist terror in postwar Poland. In the period of 1944–56, approximately 300,000 Polish people had been arrested,[21] or up to two million, by different accounts.[5] There were 6,000 death sentences issued, the majority of them carried out.[21] Possibly, over 20,000 people died in communist prisons including those executed "in the majesty of the law" such as Witold Pilecki, a hero of Auschwitz.[5] A further six million Polish citizens (i.e., one out of every three adult Poles) were classified as suspected members of a 'reactionary or criminal element' and subjected to investigation by state agencies. During the Polish October of 1956, a political amnesty freed 35,000 former AK soldiers from prisons. Still, some partisans remained in service, unwilling or simply unable to rejoin the community. The cursed soldier Stanisław Marchewka "Ryba" ("The Fish") was killed in 1957, and the last AK partisan, Józef Franczak "Lalek" ("Doller"), was killed in 1963 — almost two decades after the Second World War ended. Four years later, long after the abolition of Stalinist terror, the last member of the elite British-trained Cichociemny ("The Silent and Hidden") intelligence and support group Adam Boryczka was finally released from prison (1967). Until the end of the People's Republic of Poland, former AK soldiers were under constant investigation by the secret police. It was only in 1989, after the fall of communism, that the convictions of AK soldiers were finally declared invalid and annulled by Polish law.[5]

The largest operations and actions

The biggest battle in the history of the National Military Union (Narodowe Zjednoczenie Wojskowe, NZW) took place on May 6–7, 1945, in the village of Kuryłówka in southeastern Poland. The Battle of Kuryłówka fought against the Soviet 2nd Border Regiment of the NKVD, ended in a victory for the underground forces commanded by Major Franciszek Przysiężniak ("Marek"). The anti-communist fighters killed up to 70 Russian agents. The NKVD troops retreated in haste, only to reappear in the village later on and burn it to the ground in retaliation, destroying over 730 buildings.[22][23]

On May 21, 1945, a heavily armed unit of the Home Army (AK) led by Colonel Edward Wasilewski, attacked and destroyed the NKVD camp located in Rembertów on the eastern outskirts of Warsaw. The Russians incarcerated many hundreds of Polish citizens there,[24][25][26] including members of the Home Army.[27]

One of the biggest communist anti-partisan operations took place from June 10–25, 1945, in and around the Suwałki and Augustów regions of Poland. The "Augustów roundup" (Polish: Obława augustowska) was a joint operation of the Red Army, the Soviet NKVD, and SMERSH battalions with the assistance from Polish UB and LWP units, against underground Armia Krajowa soldiers. The Soviet operation extended into the territory of occupied Lithuania. More than 2,000 suspected anti-communist Polish fighters were captured and detained in Russian internment camps. About 600 of the "Augustow Missing" are presumed to have died in Russian custody, their bodies buried in unknown mass graves on the present territory of Russia. The Polish Institute of National Remembrance has declared the 1945 Augustów roundup to be "the largest crime committed by the Soviets on Polish lands after World War II."[28]

Among the best-known Polish underground organizations,[3] engaged in guerrilla warfare were: