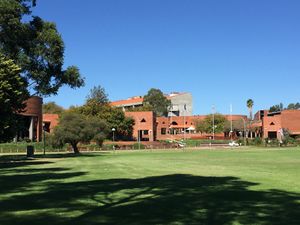 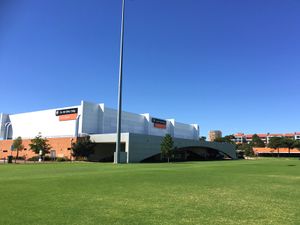 Curtin was conferred university status after legislation was passed by the Parliament of Western Australia in 1986. Since then, the university has been expanding its presence and has campuses in Sydney, Singapore, and Sarawak. It has ties with 90 exchange universities in 20 countries.[3] The University comprises five main faculties with over 95 specialists centres.

Curtin University is a member of Australian Technology Network (ATN), and is active in research in a range of academic and practical fields,[4] including Resources and Energy (e.g., petroleum gas), Information and Communication, Health, Ageing and Well-being (Public Health), Communities and Changing Environments, Growth and Prosperity and Creative Writing.

It is the only Western Australian university to produce a PhD recipient of the AINSE gold medal, which is the highest recognition for PhD-level research excellence in Australia and New Zealand.[5]

Curtin has become active in research and partnerships overseas, particularly in mainland China. It is involved in a number of business, management, and research projects, particularly in supercomputing, where the university participates in a tri-continental array with nodes in Perth, Beijing, and Edinburgh.[6] Western Australia has become an important exporter of minerals, petroleum and natural gas.[7] The Chinese Premier Wen Jiabao visited the Woodside-funded hydrocarbon research facility during his visit to Australia in 2005.[8]

Curtin University was founded in 1966 as the Western Australian Institute of Technology (WAIT). Its nucleus comprised the tertiary programs of the Perth Technical College, which opened in 1900.

Curtin University's current site in Bentley was selected in 1962, and officially opened in 1966. The first students enrolled the following year.

In 1969, three more institutions were merged with WAIT: the Western Australian School of Mines (opened in 1902), the Muresk Agricultural College (opened in 1926), and the Schools of Physiotherapy and Occupational Therapy (in operation since the 1950s at Shenton Park).[9] Between 1966 and 1976 WAIT experienced an expansion from 2,000 to 10,000 students.[10]

In 2005, Curtin and Murdoch University were engaged in a feasibility study into the possibility of a merger.[12] However, on 7 November 2005, both institutions issued a press release that such a merger would not be undertaken.[13]

In 2009, Curtin became the first university in the Australian Technology Network to be listed on the Academic Ranking of World Universities of research universities.[14]

Curtin University is ranked in the top two per cent of universities worldwide in the Academic Ranking of World Universities. In 2015, its position increased by more than 100 places to equal 303rd in the world, which was the biggest increase of any Australian university.

Curtin was awarded five-stars overall in the annual QS Stars university ratings for 2014.[29] Curtin is ranked 284 by QS World University Rankings 2015.[30] As of 2013, the University is also ranked in The Academic Ranking of World Universities (ARWU) as one of the top 500 world universities.[31]

The following subject areas at Curtin University are strongly ranked and have received a five-star rating in the QS World University Rankings by Subject 2015: 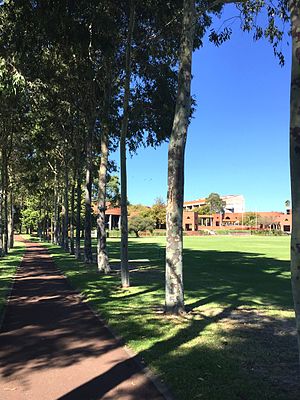 From 2007, the university's teaching and research is divided into five faculties (previously known as divisions).[33] These are:

In addition to student representation the guild manages most of the food outlets on campus. The Guild Second Hand Bookshop, Curtin Concept Store (Curtin University Apparel), IT Works - IT Convenience Store, The Spot - Stationary & News outlet, Guild Copy and Design Centre & The Tav. The guild funds many of the student clubs and societies on campus. The guild also runs a number of events throughout the year, most notably the Beach Bash held in semester one and Oktoberfest held in semester two. The guild publishes Grok, the campus magazine which has the largest distribution in the country. The Student Guild is governed by students through the Guild Council, the official spokesperson of which is the Guild President. Student representatives are elected to their positions by students in annual elections held in September and run by the Western Australian Electoral Commission. As of 1 December 2014 the Guild President is Jason Giancono.[34] Postgraduate students are represented by Curtin Student Guild Postgraduate Student Association, a department of the Guild.

Curtin has its own bus station, which is connected to the Transperth public transport network. The station is also linked to the Mandurah railway line's Canning Bridge Station by a shuttle bus service.

Curtin has two smaller off-site campuses within the Perth metropolitan area. The Graduate School of Business is located in the Perth Central Business District in the renovated former Government Printing Office, a listed building on the State Register of Heritage Places. The university's Health Research Campus is located in Shenton Park and accommodates the National Drug Research Institute.

The University Departments of Exploration Geophysics and Petroleum Engineering are located at the co-location research facilities of the Australian Resources Research Centre (ARRC[35]) which also houses offices of CSIRO Earth Science and Resource Engineering[36] and National Measurement Institute.[37] The ARRC is located in the Technology Park Belmont, adjacent to the main Bentley campus. Some University staff, researchers and students on practicum work in other locations such as the Oral Health Centre of WA (OHCWA) in Nedlands[38] and at Royal Perth Hospital, amongst other organisations.

Curtin has campuses outside Perth, the largest being the Western Australian School of Mines at Kalgoorlie, and a number of micro-campuses in locations such as Esperance, Margaret River and Geraldton. Nursing is the only course offered in Geraldton. The Muresk Institute at Northam left Curtin in 2012.

Curtin University Sydney (Curtin Sydney) was established on 20 June 2005. The first campus was located in The Rocks area. It was later relocated to the suburb of Chippendale where it occupies the historical Berlei Building. Curtin Sydney offers diploma, undergraduate and postgraduate courses to students from all over the world. In 2015 the Curtin University Council concluded that Curtin's presence in Sydney was not in line with the university's research and marketing objectives, and scheduled its closure for early 2017.[39]

The campus in Miri, Sarawak, Malaysia, is a significant development for the university and is Curtin's largest international campus. Curtin's operations in Miri began in February 1999. In 2002, a purpose-built campus was opened as Curtin's first offshore campus and the first foreign university campus in East Malaysia. It has over 3,000 students from over 40 countries, and academics from more than 15 countries.[40] Curtin Sarawak is the only approved CISCO Networking University in Miri and Brunei.[41]

The Charles Telfair Institute, a private education institution, is affiliated with Curtin University and offers undergraduate and postgraduate degrees in Mauritius.[44]

Among notable people to attend Curtin University are: