Cuxhaven (German pronunciation: [kʊksˈhaːfən]) is an independent town and seat of the Cuxhaven district, in Lower Saxony, Germany. The town includes the northernmost point of Lower Saxony. It is situated on the shore of the North Sea at the mouth of the Elbe River. Cuxhaven has a footprint of 14 kilometres (9 miles) (east-west) by 7 km (4 mi) (north-south). Its town quarters Duhnen, Döse and Sahlenburg are especially popular vacation spots on the North Sea and home to about 52,000 residents.

Cuxhaven is home to an important fisherman's wharf and ship registration point for Hamburg as well as the Kiel Canal until 2008. Tourism is also of great importance. The city and its precursor Ritzebüttel belonged to Hamburg from the 13th century until 1937. The island of Neuwerk, a Hamburg dependency, is located just northwest of Cuxhaven in the North Sea. The city's symbol, known as the Kugelbake, is a beacon once used as a lighthouse; the wooden landmark on the mouth of the Elbe marks the boundary between the river and the North Sea and also adorns the city's coat of arms. 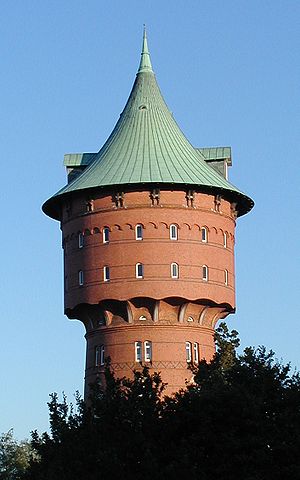 Ritzebüttel, today a part of Cuxhaven, belonged to the Land of Hadeln, first an exclave of the younger Duchy of Saxony and after its de facto dynastic partition in 1296 of the Duchy of Saxe-Lauenburg, established de jure in 1260. In 1394 the city of Hamburg conquered the fortress of Ritzebüttel and made it its stronghold to protect the estuary of the river Elbe, which connects that city with the open sea.

The Hamburg America Line built a large ocean liner terminal at Cuxhaven in 1900. Connected directly to Hamburg by a dedicated railway line and station, it served as the major departure point for German and European emigrants until 1969 when ocean liner travel ceased. The ornate assembly hall and associated buildings survived wartime damage and peacetime demolition to be restored in 1998 for use as a museum and cruise ship terminal.[2]

During the First World War Nordholz Airbase with its airship hangars, near Nordholz to the south of Cuxhaven, was one of the major German naval airship stations. On Christmas Day 1914 it was attacked by Royal Navy seaplanes in the Cuxhaven Raid.

Between 1945 and 1964 various experiments in rocketry were performed near Cuxhaven.

The fishing harbour by the Fischmarkt 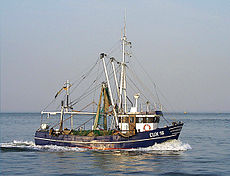 The origins of tourism go back to the year 1816 when a seaside resort was founded in Cuxhaven. Since 1964 Cuxhaven has been a state-recognized climate seaside resort (Seeheilbad) and centre of the so-called holiday region of Cuxland. 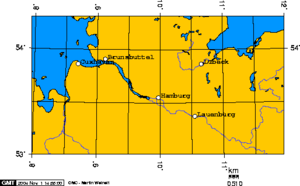 The town is served by Cuxhaven station.

A few kilometers off the Cuxhaven coast lies the island of Neuwerk. At low tide the water recedes so far from the coast that the island can be reached either by mudflat hiking or by horse carriage.

A modern landmark of Cuxhaven is the Friedrich-Clemens-Gerke Tower, a telecommunication tower built of concrete, which is not accessible to the public. It is not really a landmark, for all the cities in Germany have a similar tower.

The High test peroxide (HTP) Submarine U 1407, was raised from where she had been scuttled in Cuxhaven after WWII and rebuilt by the British, being commissioned as HMS Meteorite. It was the catalyst for a series of German-made Air-independent propulsion submarines such as the Type 212 submarine and Type 214 submarine.