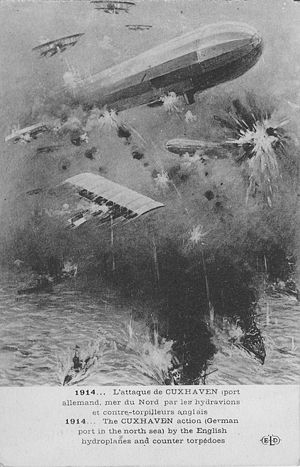 Artist's impression of the raid

Aircraft of the Royal Naval Air Service were carried to within striking distance by seaplane tenders of the Royal Navy, supported by both surface ships and submarines. The aircraft flew over the Cuxhaven area and dropped their bombs, causing damage to shore installations.

It was described at the time as an "air reconnaissance of the Heligoland Bight, including Cuxhaven, Heligoland and Wilhelmshaven ... by naval seaplanes" during which "the opportunity was taken of attacking with bombs points of military importance" in northern Imperial Germany.[1]

The Zeppelin sheds at the Nordholz Airbase near Cuxhaven were out of range of UK-based aircraft, so a plan was developed for three seaplane tenders (HMS Engadine, (Squadron-commander C. L'E. Malone, who was also air commander for the raid) Riviera (Lieutenant E. D. M. Robertson) and Empress (Lieutenant Frederick Bowhill), supported by the Harwich Force, a group of cruisers, destroyers and submarines commanded by Commodore Reginald Yorke Tyrwhitt, to launch three seaplanes each from their station near Helgoland in the German Bight. The objective was to reconnoitre military installations in the area and, if possible, bomb the Zeppelin sheds at Cuxhaven. Lieutenant Erskine Childers RNVR, the yachtsman and author of Riddle of the Sands, who had sailed the area before the war, provided the navigational briefing and accompanied Flight Commander Cecil Francis Kilner as navigator and observer.[2][3]

On Christmas Day, 1914, the first combined sea and air strike was executed by the Royal Navy, aimed at locating and if possible bombing the dirigible sheds housing German Zeppelins, in a pre-emptive strike to prevent the airships from attacking the United Kingdom. The air temperature was just above 0 °C and of the nine seaplanes lowered to the water, only seven (three Short Improved Type 74 "Folders", two Short Type 81 Folders and two Short Type 135 Folders, all carrying three 20 lb (9.1 kg) bombs) were able to start their engines and take off. Those unable to take part, a Short Type 81 (serial no. 122) and a Short "Improved Type 74" (serial no. 812), were winched back on board.[note 1]

Fog, low cloud and anti-aircraft fire prevented the raid from being a complete success, although several sites were attacked. Nevertheless, the raid demonstrated the feasibility of attack by ship-borne aircraft and showed the strategic importance of this new weapon. According to a telegram dated 7 January 1915, held in the "Churchill Archives Centre", at Churchill College, Cambridge, the "Admiralty Chief Censor intercepted message from Hartvig, Kjobenhaven to the Daily Mail, reporting that the British aerial raid on Cuxhaven [Germany] had forced the German Admiralty to remove the greater part of the High Seas Fleet from Cuxhaven to various places on the Kiel Canal."[5]

The crews of all seven aircraft survived the raid, having been airborne for over three hours.[6] Three aircraft, a Short 'Improved Type 74' (RNAS serial no. 811, flown by Flt. Lt. Charles Edmonds),[7] a Short Admiralty Type 81 (RNAS serial no. 119, Flt. Cdr. R. P. Ross), and a Short Admiralty Type 135 (RNAS serial no. 136, Flt. Cdr. C. F. Kilner with Lt. Erskine Childers as his observer), regained their tenders and were recovered; three others (one "Admiralty Type 81", RNAS serial no. 120, Flt. Lt. A. J. Miley, and two Short 'Improved Type 74' folders, RNAS serial nos. 814 (Flt. Sub-Lt. V. Gaskell-Blackburn) and 815 (Flt. Cdr. D. A. Oliver)) landed off the East Friesian island of Norderney and their crews were taken on board the submarine E11, under the command of Lieutenant-Commander Martin Nasmith (the aircraft being scuttled to prevent them from falling into enemy hands);[8] the seventh aircraft, a Short Admiralty Type 135 (RNAS serial no. 135) piloted by Flt. Lt. Francis E.T. Hewlett, suffered engine problems and was seen to ditch into the sea some 8 mi (7.0 nmi; 13 km) off Helgoland. Hewlett was posted as missing,[9] but he was found by the Dutch trawler Marta van Hattem, which took him on board and returned him to the port of IJmuiden in the Netherlands, where he disembarked on 2 January 1915[10] whence he made his way back to England.

After the raid there was no response by the German High Seas Fleet. By contrast, the Marine-Fliegerabteilung German naval arm was very active. Seaplanes and airships set out to discover the position of the attacking force. One reconnaissance seaplane, a Friedrichshafen FF.19 (No. 85) stayed aloft for five hours 52 minutes, a remarkable achievement for the period. Another seaplane from Heligoland spotted the British, but due to not having radio had to return to the island to report. Sighting was also made by the airship L6, but due to a generator failure reporting was not initially made.

The attacking force had been sailing in formation at a speed of 20 knots, but due to boiler difficulties, this speed could not be made by HMS Empress, which lagged astern of the formation. Consequently the first combat was against this vessel. Two Friedrichshafen seaplanes attacked with bombs, and although one small bomb exploded only 20 feet off the bow, no damage was done to the ship or crew. The Zeppelin L6 followed by attacking with both bombs and machine gun fire. The crew of the Empress attempted to drive the Zeppelin away, initially with rifle fire as their 12 pounder in the stern was blanked by the superstructure. No damage was done to the ship, seaplanes or airship.

Further attacks on the retiring force were attempted by submarines U-20, U-22 and U-30, but the manoeuvres by the British prevented any success. The British force returned to home waters without loss or damage.

The Cuxhaven raid was an imaginative endeavour, showing the willingness amongst naval and military leaders to adopt new technology, and prefigured the air-sea battles of the future.[11] It was a boost to British morale, and pointed the way to ways in which aircraft could be made more effective.[12]

The Cuxhaven raid marks the first employment of the seaplanes of the Naval Air Service (sic) in an attack on the enemy's harbours from the sea, and, apart altogether from the results achieved, is an occasion of historical moment. Not only so, but for the first time in history a naval attack has been delivered simultaneously above, on, and from below the surface of the water.

— Flight Magazine: the "Official Organ of the Royal Aero Club of the United Kingdom"[13]

Decorations ensuing from the action