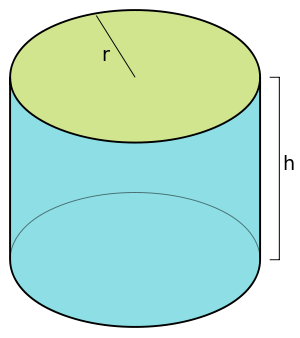 A right circular cylinder with radius r and height h.

A cylinder (from Greek κύλινδρος – kulindros, "roller, tumbler"[1]) is one of the most basic curvilinear geometric shapes, the surface formed by the points at a fixed distance from a given straight line, the axis of the cylinder. The solid enclosed by this surface and by two planes perpendicular to the axis is also called a cylinder. The surface area and the volume of a cylinder have been known since deep antiquity.

In common use a cylinder is taken to mean a finite section of a right circular cylinder, i.e., the cylinder with the generating lines perpendicular to the bases, with its ends closed to form two circular surfaces, as in the figure (right). If the ends are not closed, one obtains an open cylinder, whose surface is topologically equivalent to an open annulus.

If the cylinder has a radius r and length (height) h, then its volume is given by

Having a right circular cylinder with a height h units and a base of radius r units with the coordinate axes chosen so that the origin is at the center of one base and the height is measured along the positive x-axis. A plane section at a distance of x units from the origin has an area of A(x) square units where

An element of volume, is a right cylinder of base area Awi square units and a thickness of Δix units. Thus if V cubic units is the volume of the right circular cylinder, by Riemann sums,

Using cylindrical coordinates, the volume can be calculated by integration over

Still using a radius r and length (height) h, the surface area of a cylinder is made up of three parts:

An open cylinder does not include either top or bottom elements, and therefore has surface area (lateral area)

The surface area of a closed cylinder is made up the sum of all three components: top, bottom and side. Its surface area is

where d is the diameter. 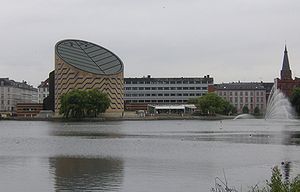 Tycho Brahe Planetarium building, Copenhagen, its roof being an example of a cylindric section

Other types of cylinders

In differential geometry, a cylinder is defined more broadly as any ruled surface spanned by a one-parameter family of parallel lines. A cylinder whose cross section is an ellipse, parabola, or hyperbola is called an elliptic cylinder, parabolic cylinder, or hyperbolic cylinder respectively. 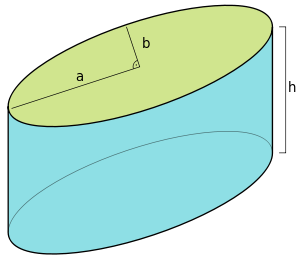 An elliptic cylinder with the half-axes a and b for the surface ellipse and the height h.

An elliptic cylinder is a quadric surface, with the following equation in Cartesian coordinates:

. Even more general than the elliptic cylinder is the generalized cylinder: the cross-section can be any curve.

The cylinder is a degenerate quadric because at least one of the coordinates (in this case z) does not appear in the equation.

An oblique cylinder has the top and bottom surfaces displaced from one another.

There are other more unusual types of cylinders. These are the imaginary elliptic cylinders:

and the parabolic cylinder:

About an arbitrary axis

Consider an infinite cylinder whose axis lies along the vector

We make use of spherical coordinates:

These variables can be used to define A and B, the orthogonal vectors that form the basis for the cylinder:

With these defined, we may use the familiar formula for a cylinder:

where R is the radius of the cylinder. These results are usually derived using rotation matrices. 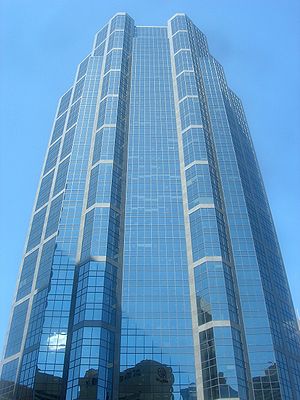 In projective geometry, a cylinder is simply a cone whose apex is at infinity, which corresponds visually to a cylinder in perspective appearing to be a cone towards the sky.

In projective geometry, a cylinder is simply a cone whose apex is at infinity.

This is useful in the definition of degenerate conics, which require considering the cylindrical conics.

A cylinder can be seen as a polyhedral limiting case of an n-gonal prism where n approaches infinity. It can also be seen as a dual of a bicone as an infinite-sided bipyramid.