From Infogalactic: the planetary knowledge core
Jump to: navigation, search
This article is about the bishop of Carthage. For other Cyprians, see Cyprian (disambiguation).

Cyprian (Latin: Thascius Caecilius Cyprianus) (c. 200 – September 14, 258)[1] was bishop of Carthage and an important Early Christian writer, many of whose Latin works are extant. He was born around the beginning of the 3rd century in North Africa, perhaps at Carthage, where he received a classical education. After converting to Christianity, he became a bishop soon after in 249. A controversial figure during his lifetime, his strong pastoral skills, firm conduct during the Novatianist heresy and outbreak of the plague, and eventual martyrdom at Carthage vindicated his reputation and proved his sanctity in the eyes of the Church. His skillful Latin rhetoric led to his being considered the pre-eminent Latin writer of Western Christianity until Jerome and Augustine.[3]

Cyprian was born into a rich pagan family of Carthage, sometime during the early third century. His original name was Thascius; he took the additional name Caecilius in memory of the presbyter to whom he owed his conversion. Before his conversion, he was a leading member of a legal fraternity in Carthage, an orator, "pleader in the courts", and a teacher of rhetoric.[4] After a "dissipated youth", Cyprian was baptised when he was thirty-five years old,[2] c. 245 AD. After his baptism, he gave away a portion of his wealth to the poor of Carthage, as befitted a man of his status.

In the early days of his conversion he wrote an Epistola ad Donatum de gratia Dei and the Testimoniorum Libri III that adhere closely to the models of Tertullian, who influenced his style and thinking. Cyprian described his own baptism in the following words:

When I was still lying in darkness and gloomy night, I used to regard it as extremely difficult and demanding to do what God's mercy was suggesting to me... I myself was held in bonds by the innumerable errors of my previous life, from which I did not believe I could possibly be delivered, so I was disposed to acquiesce in my clinging vices and to indulge my sins.... But after that, by the help of the water of new birth, the stain of my former life was washed away, and a light from above, serene and pure, was infused into my reconciled heart... a second birth restored me to a new man. Then, in a wondrous manner every doubt began to fade.... I clearly understood that what had first lived within me, enslaved by the vices of the flesh, was earthly and that what, instead, the Holy Spirit had wrought within me was divine and heavenly.

Contested election as bishop of Carthage

Not long after his baptism he was ordained deacon, and soon afterward presbyter; and some time between July 248 and April 249 he was chosen bishop of Carthage, a popular choice among the poor who remembered his patronage as demonstrating good equestrian style. However his rapid rise caused a degree of misgiving among many senior members of the clergy in Carthage,[5] an opposition which did not disappear during his episcopacy.

Soon, however, the entire community was put to an unwanted test. Christians in North Africa had not suffered persecution for many years; the church was assured and lax. Early in 250 the "Decian persecution" began.[6] Roman officials demanded all citizens to sacrifice to the pagan gods, but the Church bishops were especially targeted. Cyprian chose to go into hiding rather than face potential execution. Some clergy saw this decision as a sign of cowardice. Cyprian, however, stated that he had fled in order that his faithful would not be without a shepherd during the persecution, and that his decision to continue to lead them, although from a distance, was in accordance with divine will. Moreover, he justified this decision by pointing to the actions of the Apostles and Jesus Himself as evidence.

Controversy over the lapsed

The persecution was especially severe at Carthage, according to Church sources. Many Christians fell away, and were thereafter referred to as "lapsi". [6] The majority had signed statements (libelli) certifying that they had sacrificed to the Roman gods in order to avoid persecution or confiscation of property. Others had actually sacrificed, under torture or otherwise. Cyprian found these libellatici especially cowardly, and demanded that they and the rest of the lapsi serve public penance before being readmitted to the Church.

However, in Cyprian's absence, some presbyters disregarded his wishes by readmitting the lapsed to communion with little or no public penance. Some of the lapsi presented a second libellus purported to bear the signature of some martyr or confessor who, it was held, was able to transfer the benefit of his own victory to less steadfast brethren, and thus grant re-admission to the church.[5] This was doubly offensive, as not only were they breaking tradition with regards to apostasy, they also flouted the role of the bishop, who was normally the sole minister of absolution in all capital sins. Hundreds or even thousands of lapsi were re-admitted this way, against the express wishes of Cyprian and the majority of the Carthaginian clergy, who insisted upon earnest repentance.[3]

A schism then broke out in Carthage, as the laxist party, led largely by the presbyters who had opposed Cyprian's election, attempted to block all of Cyprian's actions in absentia. After an absence of fourteen months, Cyprian returned to his diocese and defended leaving his post in letters to the other North African bishops. After issuing a tract, "De lapsis," he called a council of North African bishops at Carthage to consider the treatment of the lapsed and the apparent schism of Felicissimus (251). The council in the main sided with Cyprian and condemned Felicissimus, though no acts of this council survive.

The schism continued as the laxists elected one Fortunatus as bishop in opposition to Cyprian. At the same time, the rigorist party in Rome, who refused absolution to all the lapsed, elected Novatian as bishop of Rome, in opposition to Cornelius. The Novatianists also secured the election of a rival bishop of their own at Carthage, Maximus by name. Cyprian now found himself wedged between the laxists and the rigorists. But these extremes strengthened the firm but moderating influence exhibited in Cyprian's writings, and the following of his opponents grew less and less. He rose still higher in the favor of the people when they witnessed his self-denying devotion during the time of a great plague and famine.

He comforted his brethren by writing his De mortalitate, and in his De eleemosynis exhorted them to active charity towards the poor, while he set the best pattern by his own life. He defended Christianity and the Christians in the apologia Ad Demetrianum, directed against a certain Demetrius and the reproach of the heathens that Christians were the cause of the public calamities. 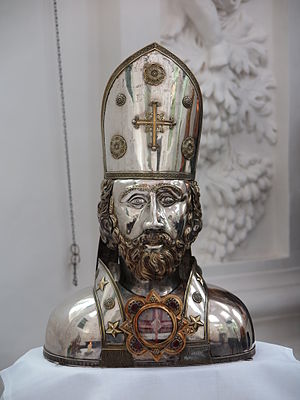 Relic of Cyprian in Kornelimünster Abbey

At the end of 256 a new persecution of the Christians under Emperor Valerian I broke out, and both Pope Stephen I and his successor, Pope Sixtus II, suffered martyrdom at Rome.[3]

In Africa Cyprian courageously prepared his people for the expected edict of persecution by his De exhortatione martyrii, and himself set an example when he was brought before the Roman proconsul Aspasius Paternus (August 30, 257).[3] He refused to sacrifice to the pagan deities and firmly professed Christ.

The proconsul banished him to Curubis, modern Korba, whence he comforted to the best of his ability his flock and his banished clergy. In a vision he saw his approaching fate. When a year had passed he was recalled and kept practically a prisoner in his own villa, in expectation of severe measures after a new and more stringent imperial edict arrived, demanding the execution of all Christian clerics, according to reports of it by Christian writers.[3]

On September 13, 258, he was imprisoned at the behest of the new proconsul, Galerius Maximus. The day following he was examined for the last time and sentenced to die by the sword.[3] His only answer was "Thanks be to God!" The execution was carried out at once in an open place near the city. A vast multitude followed Cyprian on his last journey. He removed his garments without assistance, knelt down, and prayed. After he blindfolded himself, he was beheaded by the sword.[3]

The body was interred by Christian hands near the place of execution,.[3] Over it, as well as on the actual scene of his death, churches were afterward erected. These, however, were destroyed centuries later by the Vandals. Charlemagne is said to have had the bones transferred to France, and Lyons, Arles, Venice, Compiegne, and Roenay in Flanders claim the possession of the martyr's relics.

St. Cyprian was not a speculative theologian; Cyprian's writings were always connected to his pastoral ministry.[7] His first major work was a monologue spoken to a friend called Ad Donatum, detailing his conversion, the corruption of Roman government and gladiator shows, and "the only refuge of the Christian," prayer.[3] Another early writing was the Testimonia ad Quirinum.[3] During his retreat from Carthage, he wrote his most famous treatise, De Ecclesiae Catholicae Unitate (On the Unity of the Catholic Church). Upon returning to his seat, he issued De Lapsis (The Lapsed).

Approximately sixty epistles survive, which are partly collected with the answers of those to whom they were written; doubtless this is only a fraction of his actual extent of writing. Cyprian wrote a number of treatises, some of which have also the character of pastoral letters. His most important work is his "De unitate ecclesiae." In it, he states: "if a man deserts the Chair of Peter upon whom the Church was built, does he think that he is in the Church?" (iv.); "He can no longer have God for his Father who has not the Church for his mother; . . . he who gathereth elsewhere than in the Church scatters the Church of Christ" (vi.); "nor is there any other home to believers but the one Church" (ix.).

Another important work is his Treatise on the Lord's Prayer. However, the following works are of doubtful authenticity: De spectaculis ("On Public Games"); De bono pudicitiae ("The Virtue of Modesty"); De idolorum vanitate ("On the Vanity of Images," written by Novatian); De laude martyrii ("In Praise of Martyrdom"); Adversus aleatores ("Against Gamblers"); De duobus montibus Sina et Sion (On the Two Mountains Sinai and Zion); Adversus Judaeos (Against the Jews ); and the Cena Cypriani ("Cyprian's Banquet", which enjoyed wide circulation in the Middle Ages). The treatise entitled De duplici martyrio ad Fortunatum and attributed to Cyprian was not only published by Erasmus, but probably also composed by him. A number of grimoires, such as Libellus Magicus are also attributed to Cyprian (but actually it is possible that his "Citation," was the only thing written by him, a prayer for the help of angels against demonic attacks).

Cyprian's works were edited in volumes 3 and 4 of the Patrologia Latina.

The Plague of Cyprian is named after him due to his description of it.

Pontius the Deacon wrote a biography of Cyprian titled The Life and Passion of St. Cyprian which details the saint's early life, his conversion, notable acts, and martyrdom under Valerian.

A surviving homily from St. Augustine on Cyprian's feast day indicates that his cult was fairly widespread throughout Africa by the fourth century.