The Cyrillic script /sᵻˈrɪlɪk/ is an alphabetic writing system employed across Eastern Europe and north and central Asia. It is based on the Early Cyrillic, which was developed during the First Bulgarian Empire in the 9th century AD at the Preslav Literary School.[2][3][4] It is the basis of alphabets used in various languages, past and present, in parts of Southeastern Europe and Northern Eurasia, especially those of Slavic origin, and non-Slavic languages influenced by Russian. As of 2011[update], around 252 million people in Eurasia use it as the official alphabet for their national languages, with Russia accounting for about half of them.[5] Cyrillic is one of the most used writing systems in the world.

Cyrillic is derived from the Greek uncial script, augmented by letters from the older Glagolitic alphabet, including some ligatures. These additional letters were used for Old Church Slavonic sounds not found in Greek. The script is named in honor of the two Byzantine brothers,[6] Saints Cyril and Methodius, who created the Glagolitic alphabet earlier on. Modern scholars believe that Cyrillic was developed and formalized by early disciples of Cyril and Methodius.

Cyrillic script spread throughout the East and South Slavic territories, being adopted for writing local languages, such as the Old East Slavic. Its adaptation to local languages produced a number of Cyrillic alphabets, discussed hereafter.

Capital and lowercase letters were not distinguished in old manuscripts. 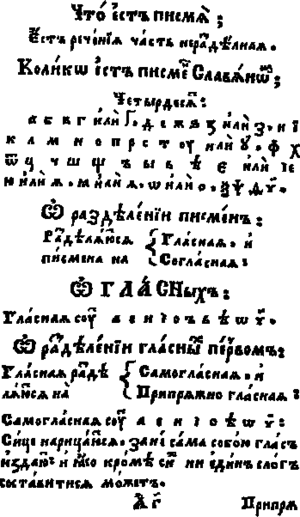 A page from the Church Slavonic Grammar of Meletius Smotrytsky (1619)

Yeri (Ы) was originally a ligature of Yer and I (Ъ + І = Ы). Iotation was indicated by ligatures formed with the letter І: Ꙗ (not ancestor of modern Ya, Я, which is derived from Ѧ), Ѥ, Ю (ligature of I and ОУ), Ѩ, Ѭ. Sometimes different letters were used interchangeably, for example И = І = Ї, as were typographical variants like О = Ѻ. There were also commonly used ligatures like ѠТ = Ѿ.

The letters also had numeric values, based not on Cyrillic alphabetical order, but inherited from the letters' Greek ancestors.

The early Cyrillic alphabet is difficult to represent on computers. Many of the letterforms differed from modern Cyrillic, varied a great deal in manuscripts, and changed over time. Few fonts include adequate glyphs to reproduce the alphabet. In accordance with Unicode policy, the standard does not include letterform variations or ligatures found in manuscript sources unless they can be shown to conform to the Unicode definition of a character.

The Unicode 5.1 standard, released on 4 April 2008, greatly improves computer support for the early Cyrillic and the modern Church Slavonic language. In Microsoft Windows, Segoe UI is notable for having complete support for the archaic Cyrillic letters since Windows 8.

The development of Cyrillic typography passed directly from the medieval stage to the late Baroque, without a Renaissance phase as in Western Europe. Late Medieval Cyrillic letters (still found on many icon inscriptions today) show a marked tendency to be very tall and narrow, with strokes often shared between adjacent letters.

Peter the Great, Czar of Russia, mandated the use of westernized letter forms in the early 18th century. Over time, these were largely adopted in the other languages that use the script. Thus, unlike the majority of modern Greek fonts that retained their own set of design principles for lower-case letters (such as the placement of serifs, the shapes of stroke ends, and stroke-thickness rules, although Greek capital letters do use Latin design principles), modern Cyrillic fonts are much the same as modern Latin fonts of the same font family. The development of some Cyrillic computer typefaces from Latin ones has also contributed to the visual Latinization of Cyrillic type.

Cyrillic uppercase and lowercase letter forms are not as differentiated as in Latin typography. Upright Cyrillic lowercase letters are essentially small capitals (with exceptions: Cyrillic ⟨а⟩, ⟨е⟩, ⟨р⟩, and ⟨у⟩ adopted Western lowercase shapes, lowercase ⟨ф⟩ is typically designed under the influence of Latin ⟨p⟩, lowercase ⟨б⟩ is a traditional handwritten form), although a good-quality Cyrillic typeface will still include separate small-caps glyphs.[14]

Letters Ge, De, I, I kratkoye, Em, Te, Tse, Be and Ve in upright (printed) and cursive (hand-written) variants. (Top is set in Georgia font, bottom in Odessa Script.)

Cyrillic fonts, as well as Latin ones, have roman and italic types (practically all popular modern fonts include parallel sets of Latin and Cyrillic letters, where many glyphs, uppercase as well as lowercase, are simply shared by both). However, the native font terminology in most Slavic languages (for example, in Russian) does not use the words "roman" and "italic" in this sense.[15] Instead, the nomenclature follows German naming patterns: 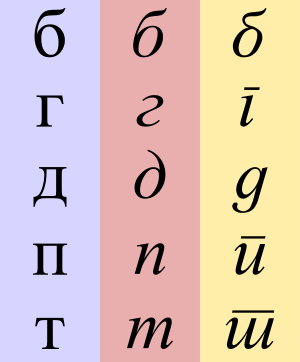 As in Latin typography, a sans-serif face may have a mechanically sloped oblique type (naklonniy shrift—"sloped", or "slanted type") instead of italic.

Similarly to Latin fonts, italic and cursive types of many Cyrillic letters (typically lowercase; uppercase only for hand-written or stylish types) are very different from their upright roman types. In certain cases, the correspondence between uppercase and lowercase glyphs does not coincide in Latin and Cyrillic fonts: for example, italic Cyrillic ⟨т⟩ is the lowercase counterpart of ⟨Т⟩ not of ⟨М⟩.

A boldfaced type is called poluzhirniy shrift ("semi-bold type"), because there existed fully boldfaced shapes that have been out of use since the beginning of the 20th century.

A bold italic combination (bold slanted) does not exist for all font families.

In Standard Serbian, as well as in Macedonian,[16] some italic and cursive letters are different from those used in other languages. These letter shapes are often used in upright fonts as well, especially for advertisements, road signs, inscriptions, posters and the like, less so in newspapers or books. The Cyrillic lowercase ⟨б⟩ has a slightly different design both in the roman and italic types, which is similar to the lowercase Greek letter delta, ⟨δ⟩.

The following table shows the differences between the upright and italic Cyrillic letters of the Russian alphabet. Italic forms significantly different from their upright analogues, or especially confusing to users of a Latin alphabet, are highlighted. 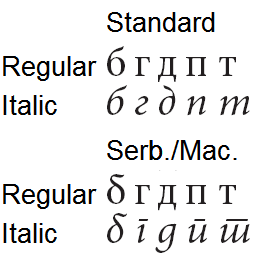 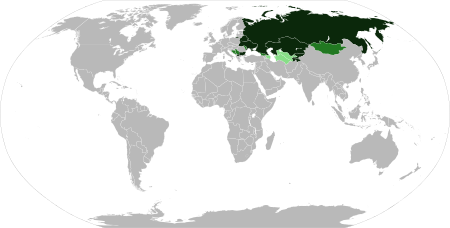 Distribution of the Cyrillic script worldwide.

Cyrillic is the sole official script.
Cyrillic is co-official with another alphabet. In the cases of Moldova and Georgia, this is in breakaway regions not recognized by the central government.
Cyrillic is not official, but is in common use as a legacy script.
Main article: Cyrillic alphabets

Among others, Cyrillic is the standard script for writing the following languages:

The Cyrillic script has also been used for languages of Alaska,[17] Slavic Europe (except for Western Slavic and some Southern Slavic), the Caucasus, Siberia, and the Russian Far East.

Because the script was conceived and popularised by the followers of Cyril and Methodius, rather than by Cyril and Methodius themselves, its name denotes homage rather than authorship. The name "Cyrillic" often confuses people who are not familiar with the script's history, because it does not identify a country of origin (in contrast to the "Greek alphabet"). Some call it the "Russian alphabet" because Russian is the most popular and influential alphabet based on the script. Some Bulgarian intellectuals, notably Stefan Tsanev, have expressed concern over this, and have suggested that the Cyrillic script be called the "Bulgarian alphabet" instead, for the sake of historical accuracy.[18]

In Bulgarian, Macedonian, Russian, and Serbian, the Cyrillic script is also known as azbuka, derived from the old names of the first two letters of most Cyrillic alphabets (just as the term alphabet came from the first two Greek letters alpha and beta). 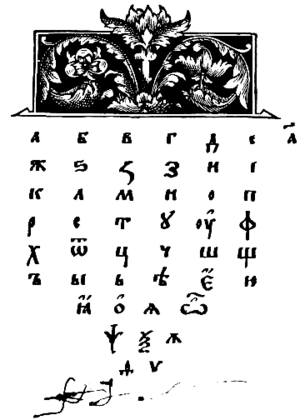 The Cyrillic script was created in the First Bulgarian Empire[19] and is derived from the Greek uncial script letters, augmented by ligatures and consonants from the older Glagolitic alphabet for sounds not found in Greek. Tradition holds that Cyrillic and Glagolitic were formalized either by Saints Cyril and Methodius who brought Christianity to the southern Slavs, or by their disciples.[20][21][22][23] Paul Cubberley posits that although Cyril may have codified and expanded Glagolitic, it was his students in the First Bulgarian Empire under Tsar Simeon the Great that developed Cyrillic from the Greek letters in the 890s as a more suitable script for church books.[19] Later Cyrillic spread among other Slavic peoples: Russians, Serbs and others, as well as among non-Slavic Vlachs and Moldavians.

The Cyrillic script came to dominate Glagolitic in the 12th century. The literature produced in the Old Bulgarian language soon spread north and became the lingua franca of the Balkans and Eastern Europe, where it came to also be known as Old Church Slavonic.[24][25][26][27][28] The alphabet used for the modern Church Slavonic language in Eastern Orthodox and Eastern Catholic rites still resembles early Cyrillic. However, over the course of the following millennium, Cyrillic adapted to changes in spoken language, developed regional variations to suit the features of national languages, and was subjected to academic reform and political decrees. A notable example of such linguistic reform can be attributed to Vuk Stefanović Karadžić who updated the Serbian Cyrillic alphabet by removing certain graphemes no longer represented in the vernacular, and introducing graphemes specific to the Serbian language (i.e., Љ Њ Ђ Ћ Џ Ј), distancing it from Church Slavonic alphabet in use prior to the reform. Today, many languages in the Balkans, Eastern Europe, and northern Eurasia are written in Cyrillic alphabets.

Relationship to other writing systems 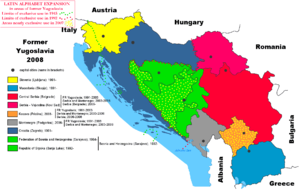 Map showing the expansion of the use of Latin alphabet in areas of former Yugoslavia.

A number of languages written in a Cyrillic alphabet have also been written in a Latin alphabet, such as Azerbaijani, Uzbek and Romanian (in Republic of Moldova until 1989, in Romania throughout the 19th century). After the disintegration of the Soviet Union in 1991, some of the former republics officially shifted from Cyrillic to Latin. The transition is complete in most of Moldova (except breakaway region of Transnistria, where Moldovan Cyrillic is official), Turkmenistan, and Azerbaijan, but Uzbekistan still uses both systems. The Russian government has mandated that Cyrillic must be used for all public communications in all federal subjects of Russia, to promote closer ties across the federation.[citation needed] This act was controversial for speakers of many Slavic languages; for others, such as Chechen and Ingush speakers, the law had political ramifications. For example, the separatist Chechen government mandated a Latin script which is still used by many Chechens. Those in the diaspora especially refuse to use the Chechen Cyrillic alphabet, which they associate with Russian imperialism. 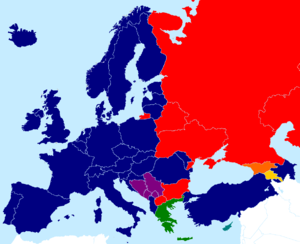 Map of European countries by script of national language.

Standard Serbian uses both the Cyrillic and Latin scripts. Cyrillic is nominally the official script of Serbia's administration according to the Serbian constitution;[29] however, the law does not regulate scripts in standard language, or standard language itself by any means. In practice the scripts are equal, with Latin being used more often in less official capacity.[30]

The Zhuang alphabet, used between the 1950s and 1980s in portions of the People's Republic of China, used a mixture of Latin, phonetic, numeral-based, and Cyrillic letters. The non-Latin letters, including Cyrillic, were removed from the alphabet in 1982 and replaced with Latin letters that closely resembled the letters they replaced.

There are various systems for Romanization of Cyrillic text, including transliteration to convey Cyrillic spelling in Latin letters, and transcription to convey pronunciation.

Representing other writing systems with Cyrillic letters is called Cyrillization.

As of Unicode version 7.0 letters of Cyrillic, including national and historical alphabets, are represented in four main blocks:

Unicode as a general rule does not include accented Cyrillic letters. A few exceptions are:

Some languages, including Church Slavonic, are still not fully supported.[citation needed]

Punctuation for Cyrillic text is similar to that used in European Latin-alphabet languages.

Other character encoding systems for Cyrillic:

Each language has its own standard keyboard layout, adopted from typewriters. With the flexibility of computer input methods, there are also transliterating or phonetic/homophonic keyboard layouts made for typists who are more familiar with other layouts, like the common English qwerty keyboard. When practical Cyrillic keyboard layouts or fonts are not available, computer users sometimes use transliteration or look-alike "volapuk" encoding to type languages that are normally written with the Cyrillic alphabet.