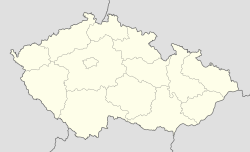 Czech Technical University in Prague (České vysoké učení technické v Praze – ČVUT in Czech, is one of the largest[citation needed] universities in the Czech Republic, and is one of the oldest institutes of technology in Central Europe. It is also the oldest non-military technical university in Europe.[1]

In the academic year 2012/2013 8 faculties and 1 university institute of Czech Technical University offered 105 degree programs and 419 fields of study, which enrolled more than 24,500 students.

It was established as the Institute of Engineering Education in 1707, but not as a tertiary university but only secondary education (high school), by Emperor Joseph I[2] as a response to Christian Josef Willenberg's petition addressed to preceding emperor Leopold I. In 1806 the institute of Engineering Education was transformed into Prague Poly-technical Institute, when the university studies began. After the disintegration of the Austro-Hungarian Empire, the name of the school was changed in 1920 to the Czech Technical University in Prague.

In 1705, Christian Josef Willenberg[3] asked Emperor Leopold I for permission to teach "the art of engineering". Later, the emperor's only son, who succeeded him on the throne in 1707 as Joseph I, ordered the Czech state of Prague to provide engineering education. Due to various reasons the request was avoided long periods of time but in October 1716 Willenberg repeated the request and finally on 9 November 1717 a decree by the Czech state granted Willenberg the professorship (first engineering professorship in Central Europe) and on 7 January 1718 he began teaching. Initially, Willenberg started teaching only 12 students in his own apartment (six barons , four knights and two burghers), but gradually students proliferated (in 1779 there were around 200) and they started studying in more suitable premises. Initially, the training focused mainly on the military. Teaching in the first year lasted one hour per day in the second year almost two.

The successor of prof. Willenberg was Johann Ferdinand Schor,[4] builder of hydraulic structures in the basin of the Vltava and author of textbooks used at the school of mathematics. He began under Willenberg's leadership by teaching optics, perspectivity, technical drawing and geography. The third was professor František Antonín Herget,[5] who mainly focused on civil engineering, particularly construction.

In September 1776 Maria Theresa allowed Herget to use the Clementinum building; in 1786 the school moved to the new and better building.

In 1787 the School of Engineering was established at the decree of Emperor Joseph II.

Student clubs within the ČVUT are integrated in the Student Union. It has 27 members and covers wide range of free time activities, with biggest club called Silicon Hill. The Student Union also organizes social events for students through the year.