D (named dee /ˈdiː/[1]) is the fourth letter of the modern English alphabet and the ISO basic Latin alphabet.

The Semitic letter Dāleth may have developed from the logogram for a fish or a door. There are various Egyptian hieroglyphs that might have inspired this. In Semitic, Ancient Greek and Latin, the letter represented /d/; in the Etruscan alphabet the letter was superfluous but still retained (see letter B). The equivalent Greek letter is Delta, Δ. 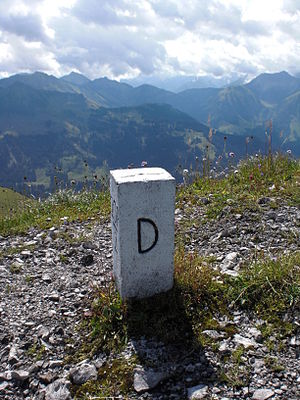 The letter D, standing for "Deutschland", i.e. Germany in German, on a boundary stone at the border between Austria and Germany.

In nearly all languages that use the Latin alphabet and the International Phonetic Alphabet ⟨d⟩ represents the voiced alveolar or voiced dental plosive /d/. However, in the Vietnamese alphabet, it represents the sound /z/ in northern dialects or /j/ in southern dialects. (See D with stroke and Dz (digraph).) In Fijian it represents a prenasalized stop /nd/.[2] In some languages where voiceless unaspirated stops contrast with voiceless aspirated stops, ⟨d⟩ represents an unaspirated /t/, while ⟨t⟩ represents an aspirated /tʰ/. Examples of such languages include Icelandic, Scottish Gaelic, Navajo and the Pinyin transliteration of Mandarin.

In British Sign Language (BSL), the letter 'd' is indicated by signing with the right hand held with the index and thumb extended and slightly curved, and the tip of the thumb and finger held against the extended index of the left hand.