Désiré-Félicien-François-Joseph Mercier (21 November 1851 – 23 January 1926) was a Belgian cardinal of the Roman Catholic Church and a noted scholar. A Thomist scholar, he had several of his works translated into other European languages. He was known for his book, Les origines de la psychologie contemporaine (1897). His scholarship gained him recognition from the Pope and he was appointed as Archbishop of Mechelen, serving from 1906 until his death, and was elevated to the cardinalate in 1907.

Mercier is noted for his staunch resistance to the German occupation of 1914–1918 during the Great War.

After the invasion, he distributed a strong pastoral letter, Patriotism and Endurance, to be read in all his churches, urging the people to keep up their spirits. He served as a model of resistance.

Désiré Mercier was born at the château du Castegier in Braine-l'Alleud, as the fifth of the seven children of small business owners Paul-Léon Mercier and his wife Anne-Marie Barbe Croquet. Three of Mercier's sisters became religious sisters. His brother Léon became a physician.[1]

One of Mercier's maternal uncles was the Reverend Fr. Adrien Croquet. In the 1860s Fr. Croquet became a missionary to the Grand Ronde Indian Reservation in western Oregon near the Pacific coast, where his surname was anglicized to Crockett. In the 1870s, a Mercier cousin, Joseph Mercier, joined their uncle Fr. Croquet in Oregon. He married a woman of one of the Native American tribes resident there. Today, several thousand descendants of Joseph and his wife are members of the tribe.[2]

Mercier received the clerical tonsure in 1871, and was ordained to the priesthood by Archbishop Giacomo Cattani, the nuncio to Belgium, on 4 April 1874. Mercier continued with graduate studies, obtaining his licentiate in theology (1877) and doctorate in philosophy from the University of Louvain.[3]

He returned to Malines in 1877 and taught philosophy at the minor seminary and soon after was named spiritual director of the seminarians. His comprehensive knowledge of Saint Thomas Aquinas earned him the newly erected chair of Thomism at Louvain's Catholic university in 1882.[4] It was in this post, which he retained until 1905, that he forged a lifelong friendship with Dom Columba Marmion, an Irish Thomist. Raised to the rank of Monsignor on 6 May 1887, Mercier founded the Higher Institute of Philosophy at the Louvain University in 1899, which was to be a beacon of Neo-Thomist philosophy.

He founded in 1894 and edited until 1906 the Revue Néoscholastique, and wrote in a scholastic manner on metaphysics, philosophy, and psychology. Several of his works were translated into English, German, Italian, Polish, and Spanish. His most important book was Les origines de la psychologie contemporaine (1897).[5] 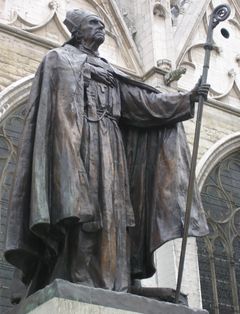 Mercier is commemorated by this statue outside St. Michael and Gudula Cathedral in Brussels by Égide Rombaux.

His reputation within his field gained the recognition of Pope Pius X, and Mercier was appointed as Archbishop of Mechelen and Primate of Belgium on 7 February 1906. He received his episcopal consecration on the following 25 March from Archbishop Antonio Vico, and took as his episcopal motto: Apostolus Jesu Christi. Mercier was created Cardinal Priest of S. Pietro in Vincoli by Pope Pius X in the consistory of 15 April 1907.[3]

During the modernist controversy, Mercier was both progressive and antimoderist. He sought to assess the compatibility of Thomistic philosophy with rapidly developing scientific knowledge.[6] He was a brilliant scholar, open to contemporary ideas and sufficiently respected that he was able to protect scholars at Louvain, such as Bollandist Hippolyte Delehaye, from accusations of "Modernism". Through his influence, Mercier prevented Albin van Hoonacker's Les douze petits prophètes traduits et commentés ("The twelve minor prophets translated and annotated") from being placed on the Index.[7]

Mercier was a close friend of Benedictine Lambert Beauduin and kept apprised of liturgical and ecumenical developments. From 1921 to 1926 he held regular conversations with Anglican theologians, notably Charles Wood, 2nd Viscount Halifax, foreshadowing the Church's future dialogue with the Anglicans. Anglicanism, Mercier believed, must be "united, not absorbed".[8]

Pope Benedict XV sent his portrait and a letter of whole-hearted support to Mercier in 1916, and at one point told him, "You saved the Church!"[citation needed] Mercier was one of the cardinal electors in the 1922 papal conclave, which selected Pope Pius XI. 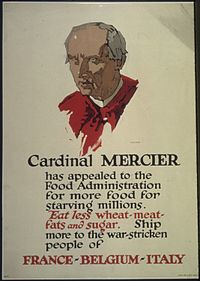 In 1914 the German army attempted a surprise invasion of France by invading neutral Belgium. Mercier had to leave his see on 20 August of that same year to attend the funeral of the late Pius X, and participate in the following conclave to elect a new pope.

Returning from the conclave Mercier passed through the Port of Le Havre, where he visited wounded Belgian, French and British troops. Once back in his archdiocese, he found the Mechelen Cathedral to have been partially destroyed. In the Imperial German atrocities that ensued in the Rape of Belgium, thirteen of the priests in Mercier's diocese were killed, not to mention many civilians, by Christmas 1914.

With his pastoral letter, Patriotism and Endurance, of Christmas 1914, Mercier came to personify Belgian resistance to the German occupation. The pastoral letter had to be distributed by hand as the Germans had cut off the postal service. Mercier's passionate, unflinching words were taken to heart by the suffering Belgians. He sometimes became a focus of Allied propaganda during the War.[7] He was kept under house arrest by the Germans, and many priests who had read the letter aloud in public were arrested as well.

Following World War I, Mercier undertook an excursion to raise funds to rebuild and stock a new library of the University of Leuven. The original library had been burned by the Germans in the war. In his travels to raise funds, Mercier visited New York City for his first and only time.

Mercier suffered from persistent dyspepsia. In early January 1926 he underwent surgery for a lesion of the stomach. During surgery, the anaesthetized Cardinal held a conversation with his surgeon.[9]

In his final days, Mercier was visited by King Albert and Queen Elisabeth, Lord Halifax, and family members. He entered a deep coma around 2:00 p.m. on 23 January and died an hour later, at age 74.[10] The Cardinal was buried at St. Rumbolds Cathedral.

The Cardinal harbored great devotion to the Sacred Heart.[11]

Mercier is known for favoring French speakers and opposing the use of Dutch.

Mercier recognized the mathematical talent of Georges Lemaître as a young seminarian, and urged him to study Einstein's theories of relativity. Lemaître became an early expert in general relativity as it applied to cosmological questions. He went on to propose an expanding model of the universe, based on both Einstein's and de Sitter's models. Abbé Georges Lemaître developed his Primeval Atom hypothesis, together with researchers of the University of Louvain, and Gamow, Alpher and Herman into the better known Big Bang theory of the origin of the universe.