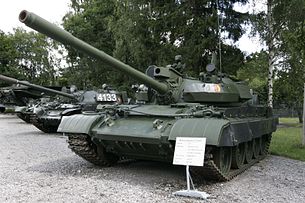 The D-10 is a Soviet 100 mm tank gun developed in late World War II. It originally equipped the SU-100 tank destroyers and was later selected for the T-55 tank, equipping these as late as 1979. On the T-55 the D-10 continues to be in active service in many countries.

At the beginning of 1944, the T-34 tank's F-34 76.2 mm tank gun was replaced by a more powerful 85 mm gun. This rendered the year-old SU-85 tank destroyer effectively obsolescent, since its D-5T 85 mm gun was now also fielded by a more flexible medium tank. F. F. Petrov's Design Bureau at Artillery Factory No. 9 was assigned the task of producing a 100 mm anti-tank gun that could be used on the SU-85 chassis, for the proposed SU-100. Petrov's team modified the S-34 naval gun for use in an armoured fighting vehicle.

The D-10 is a high-velocity gun of 100 mm bore diameter, with a barrel length of 53.5 calibres. Muzzle velocity of 895 m/s gave it good anti-tank performance by late-war standards. Initially it could penetrate about 149 mm of steel armor plate at 1,000 m range, superior to the German 75 mm KwK 42 mounted on the Panther tank and the Tiger I's 88 mm KwK 36 gun. Testing against Panther tanks at Kubinka, showed the D-10T could penetrate the Panther's glacis at its maximum range of 1500 m. This performance grew when APDS and more modern ammunition types were developed after the war. After the war a more effective high-explosive shell was also developed, taking advantage of the larger 100 mm bore.

In 1955 a stabilizer (vertical-plane STP-1 Gorizont) and bore evacuator were added to the new D-10TG version of the gun. In 1956, the subsequent D-10T2S version of the gun began production for T-54B and T-55 tanks, equipped with two-plane Tsyklon gun stabilization. Versions of the D-10 were installed on new tanks as late as 1979, and thousands still remain in service in various countries.

Returning to its naval roots, a version of the D-10 was installed as a coastal artillery piece in Finland in the 1960s. This weapon is designated 100 56 TK in Finnish Navy service and consists of a complete T-55 tank turret without the stabilizer but furnished with a manually operated ammunition lift, a chute for used cases, and gun laying apparatus allowing indirect fire directed by remote fire control. The maximum elevation of the barrel was also increased and the turret was furnished with new aiming optics, in some cases including a thermographic camera for night use.[3]

During World War II, UOF-412 round carried the 15.6 kg (34.39 lbs) F-412 high-explosive fragmentation shell. Anti-tank ammunition available from World War II until the late 1960s was based on the UBR-412 round, including the BR-412 armour-piercing high-explosive projectile, with the ballistic-capped BR-412B and BR-412D ammunition becoming available in the late 1940s. There was also a D-412 smoke shell.

In 1964, the NII-24 research bureau started design work on an improved 3UBM6 anti-tank round. In 1967 the 3BM6 hyper-velocity armour-piercing discarding-sabot round (HVAPDS) entered service: At a range of 2,000 m, it could penetrate 290 mm of flat armour, or 145 mm of armour angled at 60 degrees from the vertical. It was later replaced by the 3BM8 HVAPDS projectile, with a tungsten carbide penetrator. High-explosive anti-tank (HEAT) rounds, which penetrate armour with the focused explosion of a shaped charge, included the 3UBK4 with 3BK5M warhead, later replaced by the 3UBK9 with 3BK17M warhead.

In 1983, the T-55M and T-55AM tank upgrade program also added the ability to some tanks to fire the 9K116-1 Bastion guided missile system (NATO reporting name AT-10 Stabber), for long-range engagements of tanks and low-flying helicopters. The anti-tank missile is encased in the 3UBK10-1 shell, which is handled, loaded, and fired exactly like a conventional tank gun round. 1.5 seconds after firing, a laser guidance window in the tail of the round is uncovered, and its rocket engine ignites to burn for up to six seconds, with a total missile flight time of up to 41 seconds. The missile is very expensive, about half the price of a T-55M tank, but allows the venerable 100 mm gun to engage modern main battle tanks.