From Infogalactic: the planetary knowledge core
Jump to: navigation, search
This article is about the US military research agency. For other uses, see DARPA (disambiguation). 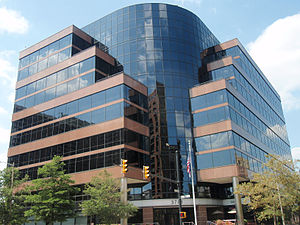 DARPA's former headquarters in the Virginia Square neighborhood of Arlington. This agency recently moved to 675 North Randolph Street, near the Ballston Common Mall.

The Defense Advanced Research Projects Agency (DARPA) is an agency of the U.S. Department of Defense responsible for the development of emerging technologies for use by the military.

DARPA was created in 1958 as the Advanced Research Projects Agency (ARPA) by President Dwight D. Eisenhower. Its purpose was to formulate and execute research and development projects to expand the frontiers of technology and science, with the aim to reach beyond immediate military requirements.[3] The administration was responding to the Soviet launching of Sputnik 1 in 1957, and DARPA's mission was to ensure U.S. military technology would be more sophisticated than that of the nation's potential enemies.

DARPA is independent from other military research and development and reports directly to senior Department of Defense management. DARPA has ca. 240 personnel (13 in management, close to 140 technical) directly managing a $3 billion budget.

DARPA funded projects have provided significant technologies that influenced many non-military fields, such as computer networking and graphical user interfaces in information technology.

DARPA characterizes its mission as follows:[4]

DARPA achievements for the past 50 years

The creation of ARPA was authorized by President Dwight D. Eisenhower in 1958 for the purpose of forming and executing research and development projects to expand the frontiers of technology and science, and able to reach far beyond immediate military requirements.,[3] the two relevant acts being the Supplemental Military Construction Authorization (Air Force)[5] (Public Law 85-325) and Department of Defense Directive 5105.15, in February 1958. Its creation was directly attributed to the launching of Sputnik and to U.S. realization that the Soviet Union had developed the capacity to rapidly exploit military technology. Initial funding of ARPA was $520 million.[6] ARPA's first director, Roy Johnson, left a $160,000 management job at General Electric for an $18,000 job at ARPA.[7] Herbert York from Lawrence Livermore National Laboratory was hired as his scientific assistant.[8]

Johnson and York were both keen on space projects, but when NASA was established later in 1958 all space projects and most of ARPA's funding were transferred to it. Johnson resigned and ARPA was repurposed to do "high-risk," "high-gain," "far out" basic research, a posture that was enthusiastically embraced by the nation's scientists and research universities.[9] ARPA's second director was Brigadier General Austin W. Betts, who resigned in early 1961. He was succeeded by Jack Ruina who served until 1963.[10] Ruina, the first scientist to administer ARPA, managed to raise its budget to $250 million.[11] It was Ruina who hired J. C. R. Licklider as the first administrator of the Information Processing Techniques Office which played a vital role in creation of the internet.[12]

Additionally, the political and defense communities recognized the need for a high-level Department of Defense organization to formulate and execute R&D projects that would expand the frontiers of technology beyond the immediate and specific requirements of the Military Services and their laboratories. In pursuit of this mission, DARPA has developed and transferred technology programs encompassing a wide range of scientific disciplines which address the full spectrum of national security needs.

From 1958 to 1965, ARPA's emphasis centered on major national issues, including space, ballistic missile defense, and nuclear test detection.[13] During 1960, all of its civilian space programs were transferred to the National Aeronautics and Space Administration (NASA) and the military space programs to the individual Services.

This allowed ARPA to concentrate its efforts on the Project Defender (defense against ballistic missiles), Project Vela (nuclear test detection), and Project AGILE (counterinsurgency R&D) Programs, and to begin work on computer processing, behavioral sciences, and materials sciences. The DEFENDER and AGILE Programs formed the foundation of DARPA sensor, surveillance, and directed energy R&D, particularly in the study of radar, infrared sensing, and x-ray/gamma ray detection.

ARPA at this point (1959) played an early role in Transit (also called NavSat) a predecessor to the Global Positioning System (GPS).[14] "Fast-forward to 1959 when a joint effort between DARPA and the Johns Hopkins Applied Physics Laboratory began to fine-tune the early explorers’ discoveries. TRANSIT, sponsored by the Navy and developed under the leadership of Dr. Richard Kirschner at Johns Hopkins, was the first satellite positioning system."[15][16]

During the late 1960s, with the transfer of these mature programs to the Services, ARPA redefined its role and concentrated on a diverse set of relatively small, essentially exploratory research programs. The agency was renamed the Defense Advanced Research Projects Agency (DARPA) in 1972, and during the early 1970s, it emphasized direct energy programs, information processing, and tactical technologies.

Concerning information processing, DARPA made great progress, initially through its support of the development of time-sharing (all modern operating systems rely on concepts invented for the Multics system, developed by a cooperation among Bell Labs, General Electric and MIT, which DARPA supported by funding Project MAC at MIT with an initial two-million-dollar grant).[17]

DARPA supported the evolution of the ARPANET (the first wide-area packet switching network), Packet Radio Network, Packet Satellite Network and ultimately, the Internet and research in the artificial intelligence fields of speech recognition and signal processing, including parts of Shakey the robot.[18] DARPA also funded the development of the Douglas Engelbart's NLS computer system and The Mother of All Demos; and the Aspen Movie Map, which was probably the first hypermedia system and an important precursor of virtual reality.

The Mansfield Amendment of 1973 expressly limited appropriations for defense research (through ARPA/DARPA) only to projects with direct military application. Some[who?] contend that the amendment devastated American science, since ARPA/DARPA was a major funding source for basic science projects of the time; the National Science Foundation never made up the difference as expected.

The resulting "brain drain" is also credited with boosting the development of the fledgling personal computer industry. Some young computer scientists left the universities to startups and private research labs such as Xerox PARC.

Many of the successful programs were transitioned to the Services, such as the foundation technologies in automatic target recognition, space based sensing, propulsion, and materials that were transferred to the Strategic Defense Initiative Organization (SDIO), later known as the Ballistic Missile Defense Organization (BMDO), now titled the Missile Defense Agency (MDA).

During the 1980s, the attention of the Agency was centered on information processing and aircraft-related programs, including the National Aerospace Plane (NASP) or Hypersonic Research Program. The Strategic Computing Program enabled DARPA to exploit advanced processing and networking technologies and to rebuild and strengthen relationships with universities after the Vietnam War. In addition, DARPA began to pursue new concepts for small, lightweight satellites (LIGHTSAT) and directed new programs regarding defense manufacturing, submarine technology, and armor/anti-armor.

On October 28, 2009 the agency broke ground on a new facility in Arlington, Virginia a few miles from the Pentagon.[19]

In fall 2011, DARPA hosted the 100-Year Starship Symposium with the aim of getting the public to start thinking seriously about interstellar travel.[20]

DARPA has seven program offices, all of which report to the DARPA director:

A 1991 reorganization created several offices which existed throughout the early 1990s:[26]

The Adaptive Execution Office (AEO) is chartered to accelerate game-changing DARPA technologies into DoD capabilities. AEO provides the agency with robust connections to the warfighter community and assists the agency with the planning and execution of technology demonstrations and field trials to promote adoption by the warfighter.

The mission of the Biological Technologies Office (BTO) is to foster, demonstrate, and transition breakthrough fundamental research, discoveries, and applications that integrate biology, engineering, and computer science for national security. BTO seeks to establish and invest in new communities of scientific interest at the intersection of traditional and emerging disciplines. Its investment portfolio goes far beyond life sciences applications in medicine to include areas of research such as human-machine interfaces,[29] microbes as production platforms, and deep exploration of the impact of evolving ecologies and environments on U.S. readiness and capabilities. BTO’s programs operate across a wide range of scales, from individual cells to complex biological systems including mammalian and non-mammalian organisms and the macro- and micro-environments in which they operate.

ARPA/DARPA is well known as a high-tech government agency, and as such has many appearances in popular fiction. Some realistic references to ARPA in fiction are in Tom Swift and the Visitor from Planet X (DARPA consults on a technical threat),[72] in episodes of television program The West Wing (the ARPA-DARPA distinction), the television program Numb3rs[73] (DARPA research into creating the first self-aware computer), and in the motion picture Executive Decision (use of a one-of-a-kind experimental prototype in an emergency).