In 2014, the algorithm was awarded the test of time award (an award given to algorithms which have received substantial attention in theory and practice) at the leading data mining conference, KDD.[3]

Consider a set of points in some space to be clustered. For the purpose of DBSCAN clustering, the points are classified as core points, (density-)reachable points and outliers, as follows:

Now if p is a core point, then it forms a cluster together with all points (core or non-core) that are reachable from it. Each cluster contains at least one core point; non-core points can be part of a cluster, but they form its "edge", since they cannot be used to reach more points. 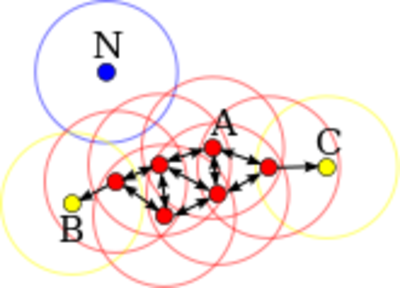 In this diagram, minPts = 3. Point A and the other red points are core points, because at least three points surround it in an ε radius. Because they are all reachable from one another, they form a single cluster. Points B and C are not core points, but are reachable from A (via other core points) and thus belong to the cluster as well. Point N is a noise point that is neither a core point nor density-reachable.

Reachability is not a symmetric relation since, by definition, no point may be reachable from a non-core point, regardless of distance (so a non-core point may be reachable, but nothing can be reached from it). Therefore a further notion of connectedness is needed to formally define the extent of the clusters found by DBSCAN. Two points p and q are density-connected if there is a point o such that both p and q are density-reachable from o. Density-connectedness is symmetric.

A cluster then satisfies two properties:

DBSCAN requires two parameters: ε (eps) and the minimum number of points required to form a dense region[lower-alpha 1] (minPts). It starts with an arbitrary starting point that has not been visited. This point's ε-neighborhood is retrieved, and if it contains sufficiently many points, a cluster is started. Otherwise, the point is labeled as noise. Note that this point might later be found in a sufficiently sized ε-environment of a different point and hence be made part of a cluster.

If a point is found to be a dense part of a cluster, its ε-neighborhood is also part of that cluster. Hence, all points that are found within the ε-neighborhood are added, as is their own ε-neighborhood when they are also dense. This process continues until the density-connected cluster is completely found. Then, a new unvisited point is retrieved and processed, leading to the discovery of a further cluster or noise.

The algorithm can be expressed as follows, in pseudocode following the original published nomenclature:[1]

Note that the algorithm can be simplified by merging the per-point "has been visited" and "belongs to cluster C" logic, as well as by inlining the contents of the "expandCluster" subroutine, which is only called from one place. These simplifications have been omitted from the above pseudocode in order to reflect the originally published version. Additionally, the regionQuery function need not return P in the list of points to be visited, as long as it is otherwise still counted in the local density estimate.

DBSCAN visits each point of the database, possibly multiple times (e.g., as candidates to different clusters). For practical considerations, however, the time complexity is mostly governed by the number of regionQuery invocations. DBSCAN executes exactly one such query for each point, and if an indexing structure is used that executes a neighborhood query in O(log n), an overall average runtime complexity of O(n log n) is obtained (if parameter ε is chosen in a meaningful way, i.e. such that on average only O(log n) points are returned). Without the use of an accelerating index structure, or on degenerated data (e.g. all points within a distance less than ε), the worst case run time complexity remains O(n²). The distance matrix of size (n²-n)/2 can be materialized to avoid distance recomputations, but this needs O(n²) memory, whereas a non-matrix based implementation of DBSCAN only needs O(n) memory. 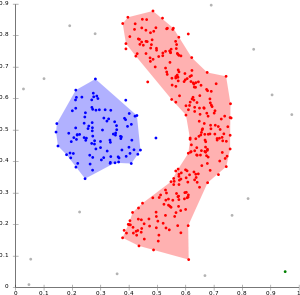 See the section below on extensions for algorithmic modifications to handle these issues.

Every data mining task has the problem of parameters. Every parameter influences the algorithm in specific ways. For DBSCAN, the parameters ε and minPts are needed. The parameters must be specified by the user. Ideally, the value of ε is given by the problem to solve (e.g. a physical distance), and minPts is then the desired minimum cluster size.[lower-alpha 1]

OPTICS can be seen as a generalization of DBSCAN that replaces the ε parameter with a maximum value that mostly affects performance. MinPts then essentially becomes the minimum cluster size to find. While the algorithm is much easier to parameterize than DBSCAN, the results are a bit more difficult to use, as it will usually produce a hierarchical clustering instead of the simple data partitioning that DBSCAN produces.

Recently, one of the original authors of DBSCAN has revisited DBSCAN and OPTICS, and published a refined version of hierarchical DBSCAN (HDBSCAN*),[4][5] which no longer has the notion of border points.

Generalized DBSCAN (GDBSCAN)[6][7] is a generalization by the same authors to arbitrary "neighborhood" and "dense" predicates. The ε and minpts parameters are removed from the original algorithm and moved to the predicates. For example on polygon data, the "neighborhood" could be any intersecting polygon, whereas the density predicate uses the polygon areas instead of just the object count.

Various extensions to the DBSCAN algorithm have been proposed, including methods for parallelization, parameter estimation and support for uncertain data. The basic idea has been extended to hierarchical clustering by the OPTICS algorithm. DBSCAN is also used as part of subspace clustering algorithms like PreDeCon and SUBCLU. HDBSCAN[4] is a hierarchical version of DBSCAN which is also faster than OPTICS, from which a flat partition consisting of most prominent clusters can be extracted from the hierarchy.[5]