The DC-10 Air Tanker is a series of American wide-body jet air tankers, which have been in service as an aerial firefighting unit since 2006.[1] The aircraft, operated by the joint technical venture 10 Tanker Air Carrier, are converted McDonnell Douglas DC-10s, and are primarily used to fight wildfires, typically in rural areas. The turbofan-powered aircraft carry up to 12,000 US gallons (45,000 liters) of water or fire retardant in an exterior belly-mounted tank, the contents of which can be released in eight seconds. Three air tankers are currently in operation, with the call-signs Tanker 910, Tanker 911 and Tanker 912.

10 Tanker began researching the development of Next Generation airtankers in 2002. Company personnel were assembled with an extensive history of heavy jet operations, modifications and ownership. After two years of research into aerial firefighting requirements and future direction, 10 Tanker selected the DC10 type for development. A Supplemental Type Certificate (STC) from the FAA for modifications of DC10 aircraft to be used for the aerial dispersant of liquids was issued in March 2006. 10 Tanker then obtained a 14 CFR Part 137 Operating Certificate for aerial firefighting and IAB approval for agency use. [2] The first converted aircraft, registered as N450AX, was originally delivered as a civil passenger plane to National Airlines in 1975, and subsequently flew for Pan Am, American Airlines, Hawaiian Airlines and Omni Air International.[3]

The conversion of the original airframe to a fire-fighting aircraft was a joint venture under the name of 10 Tanker Air Carrier between Cargo Conversions of San Carlos, California and Omni, with conversion work being performed by Victorville Aerospace at the Southern California Logistics Airport at Victorville, California.

The water or retardant is carried in three center-line belly tanks. The tanks have internal baffles to prevent fluid shift (and consequent shift in center of gravity) while in flight, and sit with a 15-inch (38 cm) ground clearance. All three tanks can be filled simultaneously on the ground in eight minutes. The retardant is gravity-fed out of the tanks, and the entire load can be dumped in eight seconds, although the actual drop rate is computer controlled by the flight crew in order to produce the desired retardant spread over the fire lines.[4] The aircraft is capable of applying a line of retardant 300 ft (91 m) wide by 1 mile (1.6 km) long.[5] 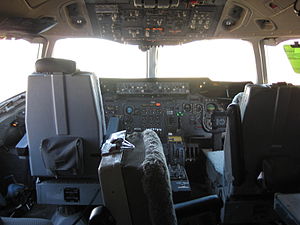 Inside view of Tanker 910's cockpit

The external retardant tanks are designed to be filled from standard 3 inch cam-lock couplings. Utilizing one, two or three hoses, the tanks can be filled as quickly as base loading capabilities permit, typically 15–20 minutes. The tanks are vented to atmosphere by a vent system installed on top of each tank to allow sufficient air into and out of the tanks during retardant drops and filling. Accurate quantity gauges are part of the installation.[6]

The number of drops it can make in a day is only limited by the time it takes to reload the aircraft with water/fire retardant and fuel, as well as its need for a proper landing field, which may well be a considerable distance from the fire.

Skeptics have argued that the DC-10s lack maneuverability.[7] However, despite its size, field experience has proven the plane’s agility above all types of terrain and in all atmospheric conditions deemed suitable for fixed wing operations in a Fire Traffic Area (FTA).[8]

"The plane does not know what terrain is under it," says 10 Tanker President Rick Hatton.[9]

Unlike most existing and proposed Large Air Tankers (LATs), the DC-10 arrives at an FTA weighing significantly less than its certified MGTOW (Maximum Gross Takeoff Weight.) This is principally due to the reduced fuel load carried on fire missions.

· The 10 frequently dispatches at a takeoff weight 40% lighter than its certified MGTOW.

· The 10 turns comfortably within the turn radii of smaller aircraft including Single Engine Air Tankers (SEAT) and lead planes.

· The 10 enjoys a wide margin above stall at typical drop speeds and weights, even with a full retardant load.[6]

One drop from the aircraft is equivalent to 12 drops from a Grumman S-2 Tracker.[10] Initially, the aircraft was intended to be operated primarily in California, and the entire state was serviced from the plane's Victorville base, but in 2007 CDF began looking into setting up a second operations base at the former McClellan Air Force Base near Sacramento, California.[7] 10 Tanker Air Carrier announced in 2007 that a second aircraft would be converted to tanker usage for the 2008 fire season.[7]

The DC-10s operate with a flight crew of three, a pilot, co-pilot and a flight engineer. The tanker works with a lead plane and can be an effective tool in combating wildfires when working directly with ground resources. 10 Tanker Air Carrier added a second DC-10 (N17085) to its fleet in July 2008, to be used on an on-call basis. On December 19, 2009, the aircraft – designated Tanker 911[11] – arrived in Melbourne, Australia, for the Australian fire season. Leased by the National Aerial Firefighting Centre on behalf of the Victoria state government, the DC-10 became operational in Australia in early January 2010, based at Avalon. The Premier of Victoria at the time, John Brumby, described the leasing of the tanker as being part of a record financing program to make sure the state was as fire-ready as possible.[12] In late 2014, the company added two additional DC-10s which had previously served with Omni and Northwest Airlines, N612AX and N522AX, which were numbered as Tankers 910 and 912 respectively. The original aircraft, N450AX, was subsequently withdrawn from use in November 2014.

In 2009, Tanker 910 faced competition from the newly introduced Evergreen 747 Supertanker, a Boeing 747 which was converted to tanker use by Evergreen International Aviation and which is able to carry up to 20,500 U.S. gallons (78,000 liters) of fire retardant.[7][13]

Certified as an air tanker by USFS in 2006, and flying under state and international contracts ever since, the DC-10s were first employed directly by USFS in 2011.[14]

In 2006, the aircraft was operated on a limited evaluation contract from the State of California. During the 2006 season, the aircraft was offered on a "call-when-needed" basis, which came with a $26,500 per-flight-hour (three hour minimum) cost and a 12- to 24-hour activation delay.[4] Under these terms, Tanker 910 flew on six fires in California and one in Washington.[7]

For the 2007–2009 fire seasons, California Governor Arnold Schwarzenegger authorized a contract for exclusive use of the aircraft at a cost of $5 million per year, or an average of about $41,000 per day for the June 15 to October 15 fire season; there was an additional $5,500 per-flight-hour charge.[4] The exclusivity of the contract allowed the aircraft to always be ready for dispatch, and it was able to launch to a fire within one hour of being called.[7][15] In 2011, the exclusive use contract was cancelled by the State of California due to state budgetary constraints.[16]

Tanker 910 was first used in July 2006 when it fought the Sawtooth Complex fire in San Bernardino County, California. While the fire was burning, Tanker 910 initially sat on the ground at Victorville, as it had not received CAL FIRE approval to operate. The mayor of Victorville, Mike Rothschild, became concerned and investigated why it was not flying, finding that the approval process was expected to take up to six months to complete. After a call to California State Senator George Runner, CAL FIRE was able to complete the necessary training and paperwork in a matter of days, with the California certification being granted on July 15, 2006.[17] The following day, July 16, the aircraft made two drops on the Sawtooth fire, and CAL FIRE personnel were reported to have said that "the two fire drops made a greater impact on containing the fire than the 12 helicopters drops for the past 10 days."[17]

Later in the same month, the aircraft was used against several smaller California fires, as well as the Columbia Complex Fire in Washington. In September 2006, Tanker 910 was activated by CAL FIRE for use against the Day Fire,[18] and the following month it flew against the Esperanza Fire.[4]

Under the terms of the exclusive-use contract, Tanker 910 was activated against the 2007 White Fire, where it flew two runs before incurring its incident. After repairs were completed, it was activated for use on the massive Zaca Fire, the second-largest fire in modern California history, in August 2007.[5] Tanker 910 was also activated for the Moonlight Fire in Plumas County in September 2007. On October 22, Tanker 910 became involved in the effort to extinguish several California wildfires, including the Slide Fire and the Grass Fire near Lake Arrowhead. The next activation came on November 24, 2007, when the tanker joined the effort to fight the Corral Fire above Malibu, California

In June, Governor Arnold Schwarzenegger activated Tanker 910 in response to the state of emergency regarding the Humboldt Fire in Butte County, California, in order to combat the 20,000+ acre fire in adverse conditions on rough terrain. It flew sorties out of a former Air Force base, now called McClellan Airfield, in Sacramento County. It made 14 drops, totaling 168,000 gallons of retardant, to quell the raging blaze, Hill said. The aircraft also participated in the defense of Big Sur at the end of June and into July.[12][19]

The aircraft was used during the Station Fire in La Cañada and Acton, California in August 2009.

In April 2011,[20] and again in September,[21] the aircraft was deployed to Texas to assist in fighting an outbreak of wildfires. Tanker 910 was expected to assist firefighters in tackling the Bastrop County Complex fire, the most destructive single wildfire in Texan history,[22] but it was not deployed due to delays in preparing the fire-retardant mixing facility at Austin-Bergstrom International Airport.[23]

Tanker 910 was ultimately used to fight a prioritized fire north of Houston, as the Bastrop County Complex fire had been largely contained by September 16.[24] The aircraft operated from Austin-Bergstrom International Airport, conducting fire-fighting operations across the state. Tanker 910 also made drops last fire season on the Wallow Fire in eastern Arizona, which eventually became the largest wildfire in Arizona history, burning more than 800 square miles.[25]

2012 was one of the most active fire seasons in United States history. It also marked the first time that Tankers 910 and 911 were deployed simultaneously in the U.S. On August 17, 2012, Tankers 910 and 911 began operations from McClellan Air Force Base (MCC) in Sacramento on numerous fires in California. The total gallons of retardant dropped had exceeded 1.7 million as of September 8, 2012.[26] The largest fires included the Ponderosa Fire just outside Lassen Volcanic National Park and The Chips Fire Plumas National Forest near Lake Almanor Basin.[27] Tanker 911 flew missions on the Taylor Bridge Fire in the Cascade Range, near Cle Elum, Washington, during the 2012 wildfire season.[11]

On May 6, 2013, U.S. Forest Service Chief Tom Tidwell announced that the Forest Service had issued a notice of intent to award contracts to five companies to provide a total of seven Next Generation airtankers for wildfire suppression. 10 Tanker Air Carrier was among the five companies selected and one of the companies' DC10s is contracted for five years with the USFS.[28]

Tanker 910 experienced its first serious aviation incident on June 25, 2007. While on its third run over the White Fire in the Kern County mountains near Tehachapi, California, the aircraft was in a left bank while turning from base to final approach. It encountered severe turbulence, the left wing dropped, and the aircraft descended 100 to 200 feet lower than expected.[15][29] The left wing struck several trees before pilots were able to power out of the descent. The aircraft climbed to altitude for a controllability check and to dump its load of retardant, then returned to its base in Victorville, where it made an emergency landing and was grounded pending an investigation, inspection, and repairs.[15][29][30]

A post-incident investigation revealed that the aircraft had suffered damage to the left wing's leading edge slats, ailerons and flaps.[31] Despite the accident, CAL FIRE stated that they were happy with the aircraft.[32] The aircraft returned to the sky for a test flight after repairs on July 30, 2007.[31][32]