From Infogalactic: the planetary knowledge core
(Redirected from Dachau International Military Tribunal)
Jump to: navigation, search
This article is about the 1945–1947 trials held in Germany. For the 1947–1949 trials held in Slovenia, see Dachau trials (Slovenia). 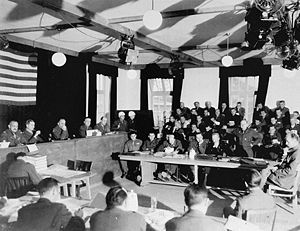 Former SS-Sturmbannfuehrer Friedrich Weitzel, officer in charge of food and clothing distribution in Dachau, testifies during the trials.

The Dachau trials were held for all war criminals caught in the United States zones in occupied Germany and Austria, as well as for those individuals accused of committing war crimes against American citizens and its military personnel. The trials, which were held within the walls of the former Dachau concentration camp, were conducted entirely by American military personnel whose legal authority had been conferred by the Judge Advocate General's Department within the U.S. Third Army.

Unlike the International Military Trials in Nuremberg that prosecuted the major Nazi war criminals under the jurisdiction of the four Allied Occupying Powers, the Dachau tribunals were held exclusively by the United States military between November 1945 and August 1948. The proceedings were similar to the 12 post-1946 Nuremberg trials that were also conducted solely by the United States.

All the hearings were held within Dachau because it was, at the time, the best known of the Nazi concentration camps and it would act as a backdrop for the trials by underlining the moral corruption of the Nazi regime.

During almost three years, the American military tribunals tried 1,672 German alleged war criminals in 489 separate proceedings. In total 1,416 former members of the Nazi regime were convicted, of these, 297 received death sentences and 279 were sentenced to life in prison. All convicted prisoners were sent to War Criminals Prison #1 at Landsberg am Lech to serve their sentences or to be hanged.

Two of the most highly publicised trials concerned the activities of German forces during the Battle of the Bulge in late 1944. In the Malmedy massacre trial, 73 members of the Waffen-SS were found guilty of summarily executing 84 American prisoners of war during the attack. In another trial, former German commando Otto Skorzeny and nine officers from the Panzer Brigade 150, were found not guilty of breaching the rules of war contrary to the Hague Convention of 1907 for wearing American military uniforms in a false flag operation, Operation Greif.[2][3] 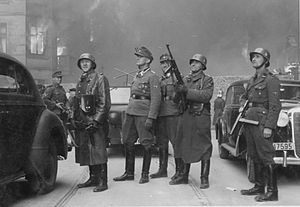 Jürgen Stroop (center, in field cap) with his men in the burning Warsaw Ghetto, 1943