She was Vice-Minister of Foreign Affairs and Minister of Finance, also European Commissioner for Financial Programming and the Budget from 2004 to 2009. She is often referred to as the "Iron Lady" or the "Steel Magnolia".

Grybauskaitė was born on 1 March 1956 in a working-class family in Vilnius. Her mother, Vitalija Korsakaitė (1922–1989), was born in the Biržai region and worked as a saleswoman; her father, Polikarpas Grybauskas (1928–2008) an electrician and driver. Grybauskaitė attended Salomėja Nėris High School. She has described herself as not among the best of students, receiving mostly fours in a system where five was the highest grade. Her favourite subjects were history, geography and physics.[3]

Grybauskaitė began participating in sport at the age of eleven, and became a passionate basketball player.[3] At the age of nineteen, she worked for a year at the Lithuanian National Philharmonic Society as a staff inspector. She then enrolled in Saint Petersburg State University, then known as Leningrad A.A. Zhdanov State University, as a student of political economy.[4] At the same time, she began working in a local factory in Saint-Petersburg. In 1983, Grybauskaitė graduated with a citation and returned to Vilnius, taking a secretarial position at the Academy of Sciences. Work in the Academy was scarce, however, and she moved to the Vilnius Communist Party High School, where she lectured in political economy and global finance.[4] From 1983 to December 1989, she was a member of the Communist Party of the Soviet Union and after the Communist Party of Lithuania broke away from the CPSU in December 1989, she was member of the CPL until June 1990. In 1988, she defended her PhD thesis at Moscow (Academy of Social Sciences).

In 1990, soon after Lithuania re-established its independence from the Soviet Union, Grybauskaitė continued her studies at the Edmund A. Walsh School of Foreign Service at Georgetown University, Washington DC, in the Special Programme for senior executives.[5]

Between 1991 and 1993, Grybauskaitė worked as Director of the European Department at the Ministry of International Economic Relations of the Republic of Lithuania. During 1993, she was employed in the Foreign Ministry as director of the Economic Relations Department, and represented Lithuania when it entered the European Union free trade agreements. She also chaired the Aid Coordination Committee (Phare and the G24). Soon afterwards, she was named Extraordinary Envoy and Plenipotentiary Minister at the Lithuanian Mission to the EU.[5] There, she worked as the deputy chief negotiator for the EU Europe Agreement and as a representative of the National Aid Co-ordination in Brussels.

In November 2005, Grybauskaitė was named "Commissioner of the Year" in the European Voice Europeans of the Year poll. She was nominated "for her unrelenting efforts to shift EU spending towards areas that would enhance competitiveness such as research and development." She commented:[6]

I don't usually participate in contests, so this is a very pleasant surprise for me. I consider it a distinction not for me personally, but for all the new EU Member States, both small and large, as an acknowledgment of their bringing a new and fresh perspective to the EU. I think that it's also a prize for having the courage to speak the often difficult truth and to point out the real price of political rhetoric in Europe. As for results, we still have to wait for them. An agreement on the budget for 2007–2013, which Europe really needs, is most important.

As Financial and Budget Commissioner, she strongly criticized the EU budget, stating it was "...not a budget for the 21st century."[7] The majority of the EU budget was spent on agricultural programmes. Grybauskaitė presented a 2008 EU budget in which, for the first time in its history, spending on growth and employment constituted the highest share of the budget, exceeding that of agriculture and natural resources.[8] She frequently criticised the Lithuanian Government, headed by Prime Minister Gediminas Kirkilas, for its lack of response to the approaching financial crisis.[9]

On 26 February 2009, Grybauskaitė officially announced her candidacy for the 2009 presidential election. In her declaration speech, she said:

I decided to return to Lithuania if the Lithuanian people decide I am needed there now. I think that we all long for the truth, transparency and responsibility for our country. We all want to live without fear, with confidence in ourselves, in each other, and in tomorrow. I can and I want to contribute with my experience, knowledge and skills to expel shadows from morality, politics, and economics to create a citizen-ruled Lithuania – a state of citizens. Therefore, I will run for the Lithuanian presidency.[10] 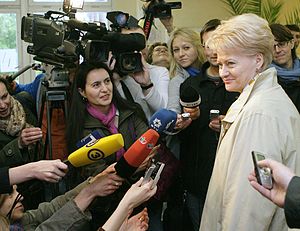 Grybauskaitė giving an interview during her 2009 presidential campaign.

There were three women and four men as presidential candidates. Opinion polls taken in February 2009 showed that Grybauskaitė was the undisputed leader in the race.[11] She ran as an independent, although she was supported by the dominant Conservative Party as well as by NGOs, including Sąjūdis.[12][13]

Her campaign was primarily focused on domestic issues. After years of strong economic growth, Lithuania faced a deep recession, with double-digit declines in economic indicators. The unemployment rate rose to 15.5% in March 2009, and a January street protest against the government's response to the recession turned violent.[14] During the campaign, Grybauskaitė stressed the need to combat the financial troubles by protecting those with the lowest incomes, simplifying the Lithuanian bureaucratic apparatus, and reviewing the government's investment programme.[15] She also promised a more balanced approach in conducting foreign policy, the primary constitutional role of the Lithuanian presidency. 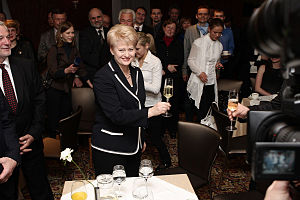 Grybauskaitė celebrating her landslide victory in 2009.

The election was held on 17 May 2009. Grybauskaitė won in a landslide, receiving 69,1% of the valid vote.[16] The 51.6% turnout was just above the threshold needed to avoid a runoff election.[17] In winning the election, Grybauskaitė became not only the first female president of Lithuania, but won by the largest margin recorded in presidential elections.[18]

Political analysts attributed the easy victory to Grybauskaitė's financial competence and her ability to avoid domestic scandals.[17] The international press was quick to dub her the "Lithuanian Iron Lady" for her outspoken speech and her black belt in karate.[19][20] Grybauskaitė, who speaks Lithuanian, English, Russian, French and Polish,[19] has mentioned Margaret Thatcher and Mahatma Gandhi as her political role models.[21] 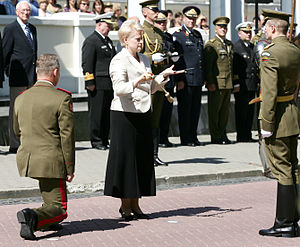 Grybauskaitė inaugurating Arvydas Pocius as the commander of the Lithuanian Armed Forces on 28 July 2009. 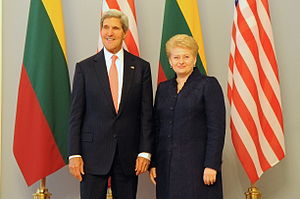 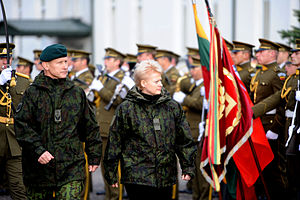 Grybauskaitė and Chief of Defence of Lithuania Arvydas Pocius.

Grybauskaitė assumed presidential duties on 12 July 2009, and accepted half of her presidential salary (312,000 litas).[14] Her first presidential visits abroad were made to Sweden and Latvia;[22] in April 2011, she made a state visit to Norway.[23] On 19 December 2013, Grybauskaitė decided to boycott Sochi Winter Olympics together with German president Joachim Gauck, French president François Hollande, and American president Barack Obama due to Russia's human rights violations, attitudes and behaviour with Eastern partners and Lithuania.[24] The main reason for this was the fact that she is an active supporter of LGBT rights and has been participating in NGOs that promote this cause in Lithuania and in Russia.

In 2014, Grybauskaitė was re-elected President. She received 46% of the vote in the first round, and defeated Zigmantas Balčytis of the Social Democratic Party in the run-off with 58% of the vote.

Relations with the Russian Federation

Following her re-election in May 2014, she said "Dignity, self-respect and mutual benefit, these are the principles that should set the basis for relations between countries and no doubt, knowing that this is our neighbor, we wish this country to democratize and cope with the arising economic challenges".[25]

In June 2014, Grybauskaitė told one German news magazine Focus: "[Putin] uses nationality as a pretext to conquer territory with military means. That's exactly what Stalin and Hitler did." She also claimed that Russia and Mr. Putin were "characterised by aggressiveness, violence, and a willingness to overstep boundaries."[26]

On 20 November 2014, Grybauskaite called the Russian Federation (quote) "...a terrorist nation that should be stopped...". This has been supported by the parliament and Lithuanian media, including being generally accepted as Lithuanian national opinion.[27]

Grybauskaitė is unmarried and has no children. Other than her native Lithuanian, she is fluent in English, Russian and Polish, and also speaks French.[28] Grybauskaitė "possesses" a black belt in karate.

Grybauskaitė has received the following national and international awards: