Danish orthography is the system used to write the Danish language. The oldest preserved examples of written Danish are in the Runic alphabet, but by the end of the High Middle Ages the Runes had mostly been replaced by the Latin letters.

The Danish alphabet is based upon the Latin alphabet and has consisted of the following 29 letters since 1980 when W was separated from V.[1]

The letters c, q, w, x and z are not used in the spelling of indigenous words. Therefore, the phonemic interpretation of letters in loanwords depends on the donating language. However, Danish tends to preserve the original spelling of loan words. In particular, a 'c' that represents /s/ is almost never normalized to 's' in Danish, as would most often happen in Norwegian. Many words originally derived from Latin roots retain 'c' in their Danish spelling, for example Norwegian sentrum vs Danish centrum.

The "foreign" letters also sometimes appear in the spelling of otherwise-indigenous family names. For example, many of the Danish families that use the surname Skov (literally: "Forest") spell it Schou.

Standard Danish orthography has no compulsory diacritics, but allows the use of an acute accent for disambiguation. Most often, an accent on e marks a stressed syllable in one of a pair of homographs that have different stresses, for example en dreng (a boy) versus én dreng (one boy). It can also be part of the official spelling such as in allé (avenue) or idé (idea).

Less often, any vowel except å may be accented to indicate stress on a word, either to clarify the meaning of the sentence, or to ease the reading otherwise. For example: jeg stód op ("I was standing"), versus jeg stod óp ("I got out of bed"); hunden gør (det) ("the dog does (it)"), versus hunden gǿr ("the dog barks").[citation needed] Most often, however, such distinctions are made using typographical emphasis (italics, underlining) or simply left to the reader to infer from the context, and the use of accents in such cases may appear dated. A common context in which the explicit acute accent is preferred is to disambiguate en/et (a, indefinite article) and én/ét (one, numeral) in central places in official written materials such as advertising, where clarity is important.

Danish formerly used both ø (in fraktur) and ö (in antiqua), though it was suggested to use ø for IPA ø and ö for IPA œ, which was also sometimes employed.[2]

Earlier instead of aa the letter å or a ligature of two a was also used.[2] In 1948 the letter å was re-introduced or officially introduced in Danish, replacing aa. The letter then came from the Swedish alphabet, where it has been in official use since the 18th century. The initial proposal was to place Å first in the Danish alphabet, before A. Its place as the last letter of the alphabet, as in Norwegian, was decided in 1955.[3] The former digraph Aa still occurs in personal names, and in Danish geographical names. Aa remains in use as a transliteration, if the letter is not available for technical reasons. Aa is treated like Å in alphabetical sorting, not like two adjacent letters A, meaning that while a is the first letter of the alphabet, aa is the last.

The difference between the Dano-Norwegian and the Swedish alphabet is that Swedish uses the variant Ä instead of Æ, and the variant Ö instead of Ø — similar to German. Also, the collating order for these three letters is different: Å, Ä, Ö.

In current Danish, W is recognized as a separate letter from V. The transition was made in 1980[citation needed]; before that, the W was merely considered to be a variation of the letter V and words using it were alphabetized accordingly (e.g.: "Wales, Vallø, Washington, Wedellsborg, Vendsyssel"). The Danish version of the alphabet song still states that the alphabet has 28 letters; the last line reads otte-og-tyve skal der stå, i.e. "that makes twenty-eight". However, today the letter "w" is considered an official letter. 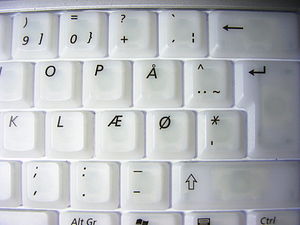 Danish keyboard with keys for Æ, Ø, and Å.

In computing, several different coding standards have existed for this alphabet: