William Daniel "Danny" Hillis (born September 25, 1956) is an American inventor, engineer, mathematician, entrepreneur, and author. He co-founded Thinking Machines Corporation, a company that developed the Connection Machine, a parallel supercomputer designed by Hillis at MIT. He is also co-founder of the Long Now Foundation, Applied Minds, Metaweb Technologies, Applied Proteomics, and author of The Pattern on the Stone: The Simple Ideas That Make Computers Work. He is Judge Widney Professor of Engineering and Medicine at the University of Southern California.[1]

Danny Hillis was born in Baltimore, Maryland in 1956. His father, William Hillis, was a US Air Force epidemiologist studying hepatitis in Africa and relocated with his family through Rwanda, Burundi, Republic of the Congo, and Kenya. He spent a brief part of his childhood in Calcutta, India when his father was a visiting faculty at ISI, Calcutta.[2] During these years the young Hillis was home schooled by his mother Argye Briggs Hillis, a biostatistician,[3] and developed an early appreciation for mathematics and biology.[4] His younger brother is David Hillis, a professor of evolutionary biology at the University of Texas at Austin, and his sister is Argye E. Hillis, a professor of neurology at Johns Hopkins University.[5]

In 1978 Hillis graduated from MIT with a BS degree in mathematics, followed in 1981 with an MS degree in Electrical Engineering and Computer Science (EECS), specializing in robotics.[6]

During this time Hillis worked at the MIT Logo Laboratory developing computer hardware and software for children. He designed computer-oriented toys and games for the Milton Bradley Company, and co-founded Terrapin Software – a producer of computer software for elementary schools. He also built a digital computer composed of Tinkertoys that is on display at the Museum of Science, Boston.[7]

Hillis' major research, however, was into parallel computing. Hillis designed the Connection Machine, a parallel supercomputer; in 1983 Hillis co-founded Thinking Machines Corporation to produce and market supercomputers based on this design. In 1985, continuing this research, Hillis received a PhD in EECS from MIT under doctoral advisers Gerald Jay Sussman, Marvin Minsky and Claude Shannon. The thesis won the ACM Distinguished Dissertation prize for 1985.

Hillis co-founded Thinking Machines Corporation in 1983 while doing his doctoral work at MIT. The company was to develop Hillis' Connection Machine design into commercial parallel supercomputers, and to explore computational pathways to building artificial intelligence. Hillis' ambitions are represented by the company's motto: "We're building a machine that will be proud of us," and Hillis' parallel architecture was to be the main component for this task:

Clearly, the organizing principle of the brain is parallelism. It's using massive parallelism. The information is in the connection between a lot of very simple parallel units working together. So if we built a computer that was more along that system of organization, it would likely be able to do the same kinds of things the brain does.[8]

At Thinking Machines Corporation, Hillis built a technical team with many people that would later become leaders in science and industry including Brewster Kahle, Guy Steele, Sydney Brenner, David Waltz, Jack Schwartz, and Eric Lander. He even recruited Richard Feynman to spend his summers there. In 1990, Thinking Machines was the market leader in parallel supercomputers, with sales of about $65 million.[9]

During 1994, however, Thinking Machines filed for bankruptcy. In 1996, after a short stint as a professor at the MIT Media Lab, Hillis joined The Walt Disney Company full-time in the newly created role of Disney Fellow and Vice President, Research and Development, Walt Disney Imagineering, which Hillis claimed was an early ambition of his:

I've wanted to work at Disney ever since I was a child... I remember listening to Walt Disney on television describing the 'Imagineers' who designed Disneyland. I decided then that someday I would be an Imagineer. Later, I became interested in a different kind of magic – the magic of computers. Now I finally have the perfect job – bringing computer magic into Disney.[10]

Hillis left Disney in 2000, taking with him Bran Ferren, President of the Walt Disney Imagineering, R&D Creative Technologies division. Together, Ferren and Hillis founded Applied Minds, a company aimed at providing technology and consulting services to firms in an array of industries, including aerospace, electronics, and toys. In July 2005, Hillis and others from Applied Minds initiated Metaweb Technologies, Inc. to develop a semantic data storage infrastructure for the Internet, and Freebase, an "open, shared database of the world's knowledge". When Metaweb was acquired by Google, the technology became the basis of Google’s Knowledge Graph.[12] Hillis, together with Dr. David B. Agus, cofounded a spinoff of Applied Minds called Applied Proteomics Inc which designed and prototyped a machine that measures the level of proteins in the blood for medical diagnosis.[13]

Hillis’ work with Agus on cancer led to the founding of the University of Southern California Physical Sciences-Oncology Center (USC PS-OC), funded by the National Cancer Institute (NCI). Hillis is the principal investigator of this program. 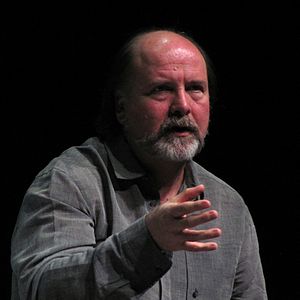 The Long Now Foundation and the Clock of the Long Now

In 1993, with Thinking Machines facing its demise, Hillis wrote about long-term thinking and suggested a project to build a clock designed to function for millennia:

When I was a child, people used to talk about what would happen by the year 2000. Now, thirty years later, they still talk about what will happen by the year 2000. The future has been shrinking by one year per year for my entire life. I think it is time for us to start a long-term project that gets people thinking past the mental barrier of the Millennium. I would like to propose a large (think Stonehenge) mechanical clock, powered by seasonal temperature changes. It ticks once a year, bongs once a century, and the cuckoo comes out every millennium.

This clock became the Clock of the Long Now, a name coined by the songwriter and composer, Brian Eno. Hillis wrote an article for Wired magazine suggesting a clock that would last over 10,000 years. The project led directly to the founding of the Long Now Foundation in 1996 by Hillis and others, including Stewart Brand, Brian Eno, Esther Dyson, and Mitch Kapor.

Hillis asserts that parallelism itself is approximately the main ingredient of intelligence; that there is not anything else required to make a mind result from a distributed network of processors. Hillis believes that

...intelligence is just a whole lot of little things, thousands of them. And what will happen is we'll learn about each one at a time, and as we do it, machines will be more and more like people. It will be a gradual process, and that's been happening.

This is not so different from Marvin Minsky's Society of Mind theory, which holds that mind is a collection of agents, each one taking care of a particular aspect of intelligence, and communicating with one another, exchanging information as required.

Some artificial intelligence theorists have other opinions – that it's not the underlying computational mode that’s crucial, but rather particular algorithms (of reasoning, memory, perception, etc.). Others argue that the right combination of "little things" is needed to give rise to the overall emergent patterns of coordinated activity that constitute real intelligence.

Hillis is one of a small number of people who have made a serious attempt to create such a "thinking machine" and his ambitions are clear:

"The Pattern on the Stone"

Main article: The Pattern on the Stone: The Simple Ideas That Make Computers Work

Hillis' 1998 popular science book "The Pattern on the Stone" attempts to explain concepts from computer science for laymen using simple language, metaphor and analogy. It moves from Boolean algebra through topics such as information theory, parallel computing, cryptography, algorithms, heuristics, Turing machines, and promising technologies such as quantum computing and emergent systems.