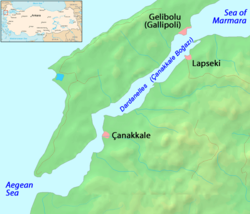 The Dardanelles, a long narrow strait dividing the Balkans (Europe) along the Gallipoli peninsula from Asia Minor 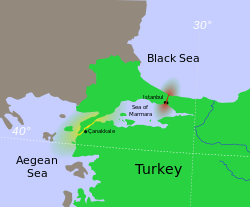 The Dardanelles (/dɑːrdəˈnɛlz/; Turkish: Çanakkale Boğazı, Greek: Δαρδανέλλια, Dardanellia), formerly known as Hellespont (/ˈhɛlᵻspɒnt/; Greek: Ἑλλήσποντος, Hellespontos, literally "Sea of Helle"), is a narrow strait in northwestern Turkey connecting the Aegean Sea to the Sea of Marmara. It is one of the Turkish Straits, along with its counterpart, the Bosphorus. It is located at approximately Lua error in Module:Coordinates at line 668: callParserFunction: function "#coordinates" was not found.. The strait is 61 kilometres (38 mi) long but only 1.2 to 6 kilometres (0.75 to 3.73 mi) wide, averaging 55 metres (180 ft) deep with a maximum depth of 103 metres (338 ft).[1] Water flows in both directions along the strait, from the Sea of Marmara to the Aegean via a surface current and in the opposite direction via an undercurrent.

Like the Bosphorus, it separates Europe (the Gallipoli peninsula) from the mainland of Asia (Anatolia). The strait is an international waterway, and together with the Sea of Marmara and the Bosporus, the Dardanelles connects the Black Sea to the Mediterranean Sea.

The Çanakkale Suspension Bridge has been planned, connecting Sarıçay (a district of Çanakkale Province) on the Asian side to Kilitbahir on the European side. This is the narrowest part of the strait.[2]

The Turkish name Çanakkale Boğazı is derived from the major city adjoining the strait, Çanakkale (which takes its name from its famous castles; kale means "castle").

The name Dardanelles derives from Dardanus, an ancient city on the Asian shore of the strait which in turn takes its name from Dardanus, the mythical son of Zeus and Electra.

The Greek name Ἑλλήσποντος (Hellespontos) means "Sea of Helle", and was the ancient name of the narrow strait. It was variously named in classical literature Hellespontium Pelagus, Rectum Hellesponticum, and Fretum Hellesponticum. It was so called from Helle, the daughter of Athamas, who was drowned here in the mythology of the Golden Fleece.

The strait has often played a strategic role in history. The Dardanelles is unique in many respects. The very narrow and winding shape of the strait is more akin to that of a river. It is considered one of the most hazardous, crowded, difficult and potentially dangerous waterways in the world. The currents produced by the tidal action in the Black Sea and the Sea of Marmara are such that ships under sail must await at anchorage for the right conditions before entering the Dardanelles. 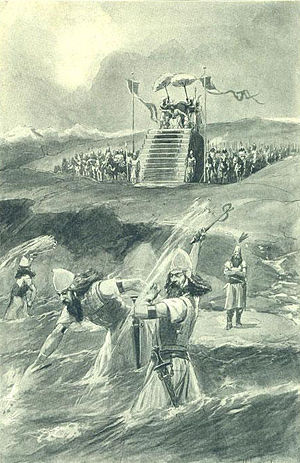 An artist's illustration depicting Xerxes' alleged "punishment" of the Hellespont

The ancient city of Troy was located near the western entrance of the strait, and the strait's Asiatic shore was the focus of the Trojan War. Troy was able to control the marine traffic entering this vital waterway. The Persian army of Xerxes I of Persia and later the Macedonian army of Alexander the Great crossed the Dardanelles in opposite directions to invade each other's lands, in 480 BC and 334 BC respectively.

Herodotus tells us that, circa 482 BC, Xerxes I (the son of Darius) had two pontoon bridges built across the width of the Hellespont at Abydos, in order that his huge army could cross from Persia into Greece. This crossing was named by Aeschylus in his tragedy The Persians as the cause of divine intervention against Xerxes.[3]

According to Herodotus (vv.34), both bridges were destroyed by a storm and Xerxes had those responsible for building the bridges beheaded and the strait itself whipped. The Histories of Herodotus vii.33–37 and vii.54–58 give details of building and crossing of Xerxes' Pontoon Bridges. Xerxes is then said to have thrown fetters into the strait, given it three hundred lashes and branded it with red-hot irons as the soldiers shouted at the water.[4]

Herodotus commented that this was a "highly presumptuous way to address the Hellespont" but in no way atypical of Xerxes. (vii.35)

Harpalus the engineer eventually helped the invading armies to cross by lashing the ships together with their bows facing the current and, so it is said, two additional anchors.

Helle, the daughter of Athamas, was drowned here in the legend of the Golden Fleece.

It was the scene of the legend of Hero and Leander. Leander swam the strait nightly in order to tryst with his beloved, the priestess Hero, and was drowned in a storm.

The Dardanelles were vital to the defence of Constantinople during the Byzantine period. 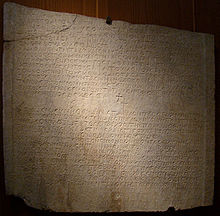 Also, the Dardanelles was an important source of income for the ruler of the region. At the Istanbul Archaeological Museum a marble plate contains a law by the Byzantine Emperor Anastasius I (491–518 AD), that regulated fees for passage through the customs office of the Dardanelles (see image to the right). Translation:

... Whoever dares to violate these regulations shall no longer be regarded as a friend, and he shall be punished. Besides, the administrator of the Dardanelles must have the right to receive 50 golden Litrons, so that these rules, which we make out of piety, shall never ever be violated... ... The distinguished governor and major of the capital, who already has both hands full of things to do, has turned to our lofty piety in order to reorganize the entry and exit of all ships through the Dardanelles... ... Starting from our day and also in the future, anybody who wants to pass through the Dardanelles must pay the following:

– All wine merchants who bring wine to the capital (Constantinopolis), except Cilicians, have to pay the Dardanelles officials 6 follis and 2 sextarius of wine.
– In the same manner, all merchants of olive-oil, vegetables and lard must pay the Dardanelles officials 6 follis. Cilician sea-merchants have to pay 3 follis and in addition to that, 1 keration (12 follis) to enter, and 2 keration to exit.

– All wheat merchants have to pay the officials 3 follis per modius, and a further sum of 3 follis when leaving.

Since the 14th century the Dardanelles have almost continuously been controlled by the Turks. 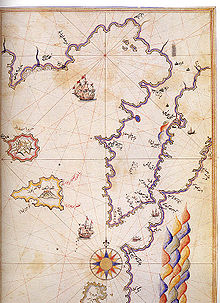 Gaining control or special access to the strait became a key foreign policy goal of the Russian Empire during the 19th century. During the Napoleonic Wars, Russia—supported by Great Britain in the Dardanelles Operation—blockaded the straits in 1807. Following the Ottoman Empire's defeat in the Russo-Turkish War of 1828–29, in 1833 Russia pressured the Ottomans to sign the Treaty of Hunkiar Iskelesi—which required the straits to be closed to warships of non-Black Sea powers at Russia's request. That would have effectively given Russia a free hand in the Black Sea.

That treaty alarmed the losers,[clarification needed] who were concerned that the consequences of potential Russian expansionism in the Black Sea and Mediterranean regions could conflict with their own possessions and economic interest in the regions. At the London Straits Convention in July 1841, the United Kingdom, France, Austria, and Prussia pressured Russia to agree that only Turkish warships could traverse the Dardanelles in peacetime. The United Kingdom and France subsequently sent their fleets through the straits to attack the Crimean Peninsula during the Crimean War (1853-1856) —but this was done as allies of the Ottoman Empire. That convention was formally reaffirmed by the Congress of Paris in 1856, following the Russian defeat in the Crimean War. It remained technically in force into the 20th and 21st centuries.

A view of the Dardanelles from Gallipoli peninsula

In 1915, the western Allies sent a massive invasion force of British, Indian, Australian, New Zealand and Newfoundland troops to attempt to open up the strait. At the Gallipoli campaign, Turkish troops trapped the Allies on the beaches of the Gallipoli peninsula. The campaign results did damage to the career of Sir Winston Churchill, then the First Lord of the Admiralty, who eagerly promoted the use of Royal Navy sea power to force open the straits. Mustafa Kemal Atatürk, later founder of the Republic of Turkey, was a commander for the Ottomans during the battle.

The straits were mined by the Turks to prevent Allied ships from penetrating them, but in minor actions, two submarines, one British and one Australian, did succeed in penetrating the minefields. The British one sank an obsolete Turkish pre-dreadnought battleship off the Golden Horn of Istanbul. Sir Ian Hamilton's Mediterranean Expeditionary Force was unsuccessful in its attempt to capture the Gallipoli peninsula, and its withdrawal was ordered in December 1915, after 8 months' fighting. Total Allied deaths were 43,000 British, 15,000 French, 8,700 Australians, 2,700 New Zealanders and 1,370 Indians. Total Turkish deaths were around 60,000. 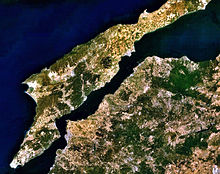 Satellite image of the Dardanelles

Following the war, the 1920 Treaty of Sèvres demilitarized the strait and made it an international territory under the control of the League of Nations. This was amended after the Greco-Turkish War (1919–1922) under the 1923 Treaty of Lausanne which restored the straits to Turkey but allowed all foreign warships to traverse the straits freely. Turkey rejected the terms of this treaty and subsequently remilitarized the area. The reversion to this old regime was formalized under the Montreux Convention of July 1936. The convention, which is still technically in force today, treats the straits as an international shipping lane, but Turkey retains the right to restrict the naval traffic of non–Black Sea nations (like Greece or Algeria). 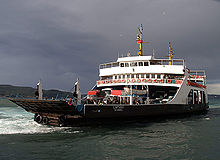 Ferry line across the Dardanelles in Çanakkale

During World War II, through February 1945, when Turkey was neutral for most of the length of the conflict, the Dardanelles were closed to the ships of the belligerent nations. Turkey declared war on Germany in February 1945, but it did not employ any offensive forces during the war.

In July, 1946, the Soviet Union sent a note to Turkey proposing a new régime for the Dardanelles that would have excluded all nations except the Black Sea powers. The second proposal was that the straits should be put under joint Turkish-Soviet defence. This meant that Turkey, the Soviet Union, Bulgaria and Romania would be the only states having access to the Black Sea through the Dardanelles. The Turkish government however, under pressure from the United States, rejected these proposals.[5]