Darren McGavin (May 7, 1922 – February 25, 2006) was an American actor best known for his portrayal of the grumpy but loving father in the film A Christmas Story, and for the title role in the television horror series Kolchak: The Night Stalker. He appeared as the title character in the 1950s television series Mickey Spillane's Mike Hammer. From 1959–1961, McGavin starred in the NBC western series Riverboat, first with Burt Reynolds and then with Noah Beery, Jr., and in later years, he had a recurring role in the sitcom Murphy Brown, as the title character's father, for which he received an Emmy Award.

McGavin was born William Lyle Richardson in Spokane, Washington,[1] a son of Reed D. Richardson and his wife Grace (Bogart) Watson.[2][3] In interviews in the 1960s, McGavin said his parents divorced when he was very young. His father, unable to care for him, placed him in an orphanage at age 11.

McGavin began to run away, sleeping on the docks and in warehouses. He would live in three different orphanages. The last was the Dyslin Boys Ranch in Pierce County, Washington, a boys' home, which turned out to be a safe haven. Farm chores were assigned, and he lived with other boys who had also been abandoned by their parents. McGavin said the ranch's owners helped him develop a sense of pride and responsibility that turned his life around. He was rejected for military service during World War II because of his bad knees. However, he did make a training film for the Army about venereal diseases.

Untrained as an actor, McGavin worked as a painter at Columbia Pictures movie studios in 1945. When an opening became available for a bit part in A Song to Remember, McGavin applied and won his first movie role. (He had spent a year at University of the Pacific in Stockton, California.) Shortly afterwards, he moved to New York City and studied at the Neighborhood Playhouse and the Actors Studio under teacher Sanford Meisner. He began working in live TV and on Broadway, including The Rainmaker (where he created the title role), The King and I and Death of a Salesman. 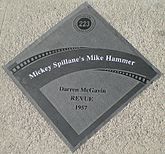 McGavin returned to Hollywood and became busy in a wide variety of TV and movie roles. In 1955 he appeared in the short film A Word to the Wives with Marsha Hunt, and with roles in the feature films Summertime and The Man with the Golden Arm. During this period, McGavin also appeared on the anthology series Alfred Hitchcock Presents in an episode titled "The Cheney Vase" as a scheming caretaker and aspiring art thief, opposite Carolyn Jones, Patricia Collinge, and Ruta Lee.

Over the course of his career, McGavin starred in seven different TV series and guest-starred in many more; these television roles increased in the late 1950s and early 1960s with leading parts in series such as Mickey Spillane's Mike Hammer and Riverboat. McGavin held a black belt in traditional Japanese karate and was noted for doing many of his own stunts and for the "enthusiasm" he put into some fight scenes, sometimes forgetting to pull his punches and "ad-libbing" moves. McGavin narrated and appeared in The Big Picture TV series in 1967, "The Inner Ring" episode, produced for The Office of the Chief of Information by The Army Pictorial Center.

In 1970, he was in negotiations to replace Larry Hagman as the male lead in the television series I Dream of Jeannie for an intended sixth season, but NBC stated that they would rather cancel the series than have any additional similarities to Bewitched, in which the male lead was replaced by another actor.

McGavin was also known for his role as Sam Parkhill in the miniseries adaptation of The Martian Chronicles. He appeared as a fill-in regular in The Name of the Game in an episode entitled "Goodbye Harry" and was featured as a reporter in one of the Gene Barry segments.

The first of his two best-known roles came in 1972, in the supernatural-themed TV movie The Night Stalker (1972). With McGavin playing a reporter who discovers the activities of a modern-day vampire on the loose in Las Vegas, the film became the highest-rated made-for-TV movie in history at that time; and when the sequel The Night Strangler (1973) also was a strong success, a subsequent television series Kolchak: The Night Stalker (1974) was made. In the series, McGavin played Carl Kolchak, an investigative reporter for the INS, a Chicago-based news service, who regularly stumbles upon the supernatural or occult basis for a seemingly mundane crime; although his involvement routinely assisted in the dispelment of the otherworldly adversary, his evidence in the case was always destroyed or seized, usually by a public official or major social figure who sought to cover up the incident. He would write his ensuing stories in a sensational, tabloid style which advised readers that the true story was being withheld from them. McGavin and the cast were enthusiastic about the series. McGavin reportedly entered into a verbal agreement with Sid Sheinberg (President of MCA and Universal TV) to produce The Night Stalker as a TV series as a coproduction between Universal and McGavin's Taurean Productions. Early promises were never fulfilled, and McGavin expressed concern over script quality and lack of network commitment toward promoting the show. His concerns appeared justified, as the series drifted into camp humor and the production values declined in later episodes.[4]

McGavin was asked to play the role of Arthur Dales, founder of the X-Files, in three episodes: Season 5's "Travelers" and two episodes from Season 6, "Agua Mala" and "The Unnatural". Failing health forced him to withdraw from the latter, and the script (written and directed by series star David Duchovny) was rewritten to feature M. Emmet Walsh as Dales's brother, also called Arthur.

In 1983, he starred as "Old Man Parker", the narrator's father, in the movie A Christmas Story. He portrayed a middle-class father in 1940s Hohman, Indiana, who was endearing in spite of his being comically oblivious to his own use of profanity and completely unable to recognize his unfortunate taste for kitsch. Blissfully unaware of his family's embarrassment by his behavior, he took pride in his self-assessed ability to fix anything in record time, and carried on a tireless campaign against his neighbor's rampaging bloodhounds. McGavin allegedly received a fee of $2 million to play the role, making him one of the highest paid actors of the time.

McGavin made an uncredited appearance in 1984's The Natural as a shady gambler and appeared on a Christmas episode ("Midnight of the Century") of Millennium, playing the long-estranged father of Frank Black (Lance Henriksen); he also appeared as Adam Sandler's character's hotel-magnate father in the 1995 movie Billy Madison.

During the filming of The Natural, Robert Redford was so pleased with McGavin's portrayal of his character that they began to expand the role. However, after a certain point, union rules dictated that the actor's contract needed to be renegotiated for salary and billing. After haggling on salary, and holding up production of the movie because of it, the billing had to be decided. McGavin became somewhat fed up with the proceedings and instructed his agent to waive his billing in the credits entirely so they could get back to filming.

He won a CableACE Award (for the 1991 TV movie Clara) and received a 1990 Emmy Award[5] as an Outstanding Guest Star in a Comedy Series on Murphy Brown, in which he played Murphy's father.

There was a brief and unsuccessful remake of the Night Stalker TV series in 2005 starring Stuart Townsend. In the initial episode aired on September 29, 2005, McGavin appeared momentarily in the background, using digitally inserted footage from his role in the original series.

Darren McGavin narrated the majority of the audio book versions of the adventure novels by John D. MacDonald in which each title included a color. The central character and main voice of the novels was Travis McGee.

McGavin was married twice. The first was to Melanie York on March 20, 1944. It ended in divorce in 1969, but produced four children: Bogart, York, Megan, and Graemm Bridget McGavin. The second was to Kathie Browne on December 31, 1969, ending with her death in 2003.

McGavin was a lifelong active Democrat.[6]

McGavin died on February 25, 2006, at the age of 83 of cardiovascular disease in a Los Angeles hospital,[7] one day after his co-star from No Deposit, No Return, Don Knotts. He is buried in Hollywood Forever Cemetery.[8]