The Dartmouth College Big Green are the varsity and club athletic teams of Dartmouth College, an American university located in Hanover, New Hampshire. Dartmouth's teams compete in the Ivy League conference of the National Collegiate Athletic Association (NCAA) Division I, as well as in the ECAC Hockey conference. The College offers 34 varsity teams, 17 club sports, and 24 intramural teams.[5] Sports teams are heavily ingrained in the culture of the College and serve as a social outlet, with 75% of the student body participating in some form of athletics.[5][6] 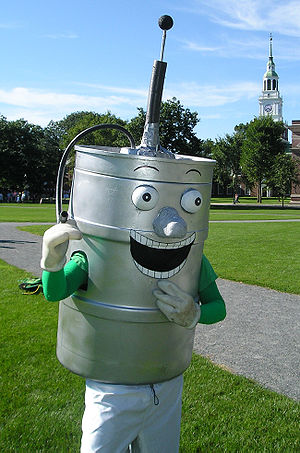 Keggy the Keg posing on the Dartmouth College Green with Baker Memorial Library in the background.

The students adopted a shade of forest green ("Dartmouth Green") as the school's official color in 1866.[7] Beginning in the 1920s, the Dartmouth College athletic teams were known by their unofficial nickname "the Indians," a moniker that probably originated among sports journalists.[8] This unofficial mascot and team name was used until the early 1970s, when its use came under criticism. In 1974, the Trustees declared the "use of the [Indian] symbol in any form to be inconsistent with present institutional and academic objectives of the College in advancing Native American education."[9] Some alumni and students, as well as the conservative student newspaper, The Dartmouth Review, have sought to return the Indian symbol to prominence,[10] but no team has worn the symbol on its uniform in decades.[11] The new nickname was inspired by The Dartmouth Green in the center of campus.

The baseball team plays at Red Rolfe Field at Biondi Park, which, in 2009, underwent renovations that added an artificial turf surface. The team won Ivy League Championships in its first two seasons at the facility (2009 and 2010).

Dartmouth competed in two NCAA Men's Division I Basketball Championship games but came up short both times. In 1942, Dartmouth was runner-up to Stanford University and lost to the University of Utah in 1944.

Students first began rowing at Dartmouth in 1833 and it has since grown to be the most popular sport at Dartmouth, with over 200 participating. Dartmouth's first professional coach was the legendary professional oarsman, John Biglin, who was also the subject of many Thomas Eakins paintings from that era. Today, the Dartmouth Rowing Club consists of three varsity programs: Men's Heavyweight, Men's Lightweight, and Women's Open-weight. The men's teams compete in the Eastern Association of Rowing Colleges (EARC) while the women's team competes in the Eastern Association of Women's Rowing Colleges (EAWRC).

All teams train out of the Friends of Dartmouth Rowing Boathouse, located on the Connecticut River which runs along the western edge of the campus. The river provides more than 40 miles (64 km) of flat rowable water, with virtually no powerboat or other traffic, but teams must deal with the river's late winter thaw. Other facilities include two smaller boathouses, rowing tanks, the varsity weight room, and two erg-rooms. Dartmouth's relatively small programs have done well at the Championship level, and produced an outsized number of Olympians and National Team Members.

Teams train for and race in long distance 'head races' in the fall. Because of the frozen river, winter training consists of intense indoor training as well as cross country skiing which is generally regarded as a blessing in disguise. The spring season consists of shorter 2000m sprint races against traditional IVY and NE US opponents. The season for both men's heavyweight and lightweight programs culminate in the Eastern Sprints and IRA regattas. The women's team competes in the Ivy League (having left the Women's Sprints in 2011) to qualify for the women's national championship.

The Dartmouth Cycling Team was founded in 1961 and has become one of the most successful club sports at the College. The team races in Division II and has won three national titles, most recently in 2004. Additionally, Dartmouth Cycling has had several Individual National Champions most recently in 2010. Throughout its history, the Dartmouth Cycling team has won the Ivy League Title seven times, most recently in 2010. The Team is a group of students (undergrad and graduate) who enjoy cycling. The team rides and races together on a regular basis, and runs the gamut of skill experience from expert to Cat. 5. While the spring Eastern Conference Road season is the main focus, Dartmouth cycling also regularly sends riders to Fall Mountain Bike and Cyclocross races.

The Dartmouth co-ed Equestrian team is based at Morton Farm in Etna, New Hampshire. They have frequent success at regional and national levels.

In 2003, Dartmouth's Men's Lacrosse team posted one of the most famous upsets in lacrosse history when unranked Dartmouth played #2 Princeton at Princeton's Class of 1952 Field. Dartmouth, having finished last in the Ivy League in 2002, were ten goal underdogs against Princeton, the defending Ivy League champs going into the game. Nevertheless, Dartmouth prevailed and stunned the Tigers 13-6. Dartmouth went on to win the Ivy League title and qualify for the NCAA tournament.

In the 2014 season, Big Green softball won the first Ivy League title in program history and will be making their first appearance in the NCAA Division 1 post-season tournament.

The squash courts are home to the Dartmouth Men's and Women's Squash teams, both of which are perennial competitors in the ivy-league and consistently ranked in the top ten nationally. Thirteen Big Green men and eight women have earned All-Ivy honors since the 1970s. Additionally, with the teams' training and hosting matches on ten international courts in the John Berry Sports Center, Dartmouth has hosted the men's and women's Intercollegiate Squash Association Championships four times – in 1988, 1991, 1997, and 2005 – as well as the national junior championships three times, most recently in 1996.

The men’s varsity swim team at Dartmouth College began in 1920, making it one of the oldest continuous collegiate swim programs in the United States. The swim team competes in the Eastern Intercollegiate Swim League, which includes all eight Ivy League schools and the US Naval Academy. The team’s season begins in mid September and continues until late March, during which the EISL Championships take place. During the season the team has weekly competitions, against EISL member teams as well as several other New England college teams. The team practices and hosts meets in the Dartmouth College Aquatic Facilities' Karl Michael Competition Pool & the Spaulding Pool, both located in Alumni Gymnasium.

The team has a long tradition of success within the league as well as nationally. During the 1930s, the team rose to prominence within the league, garnering multiple championship titles and sending several swimmers and relays to the NCAA Championships. More recently, its 200 freestyle relay team was ranked in the top 50 in the nation.

In 2002, Dartmouth College was forced to cut both the men’s and women’s swim teams as a result of the schools financial troubles and forced budgetary cuts. The cutting of the swim teams received national attention after a member placed the team on EBay in an effort to raise money for the team. After significant lobbying and fundraising by students, alumni, and supporters, both the men’s and women’s teams were reinstated under the John C. Glover Fund for the Support of Swimming and Diving. The fund was named after John C. Glover, an all America swimmer for Dartmouth in the class of 1955, who died while training for the Olympics at Yale University in 1956.

† The NCAA started sponsoring the intercollegiate golf championship in 1939, but it retained the titles from the 41 championships previously conferred by the National Intercollegiate Golf Association in its records.

Below is one national team title that was not bestowed by the NCAA:

The Dartmouth Rugby Football Club (or DRFC) was founded in 1951, and competes in the Ivy Rugby Conference against its traditional Ivy League rivals. Dartmouth has been led by coach Gavin Hickie since 2012, following the departure of former head coach Alexander Magleby who in 2012 became head coach of the US national rugby team.

Dartmouth has enjoyed success on a national stage. In 1965, the first XV was undefeated and was declared the unofficial national collegiate champion. During the 1980s, Dartmouth twice reached the finals of the US national collegiate championship losing both times to Cal, and since 1980 Dartmouth has reached the semi-finals three times.[16] In the 2012-13 season, Dartmouth played in two post-season competitions. Dartmouth played in the newly formed Varsity Cup, losing to Navy in the quarterfinals. Dartmouth also played in the D1-AA national playoffs, beating Ptt 43-34 in the round of 16, and defeating St. Bonaventure 30-22 in the quarterfinals, before falling in the semifinals to Central Florida 45-38.[17]

The Dartmouth Ultimate Frisbee team was first established in 1977 at Dartmouth College, originally named "The Blossom Brothers." The team's origins and development in many ways parallel the development of the sport of Ultimate itself. The initially relaxed, informal sport gave way to a more competitive sport, with rules and procedures outlined by the Ultimate Players Association. In the same way, the Dartmouth team now trains with a combination of track workouts, weight-lifting, plyometrics, and Ultimate strategies. Although the team is not a varsity or NCAA-recognized team, the intensity of their practices and workouts is similar to that of many varsity sports teams.

The Dartmouth men's ultimate team first gained recognition when it competed in the college National series in 2003. Dartmouth placed low in the series, but since has been a leading presence in the Northeast region. The team's current rivals in the Northeast region are Redline and E-Men, from Harvard University and Tufts University, respectively. In 2008, the team qualified for UPA College Nationals a second time and tied for 13th place.

Current funding is provided in small part by Dartmouth's club sports fund, while the majority of funds are raised by members and fundraising activities.